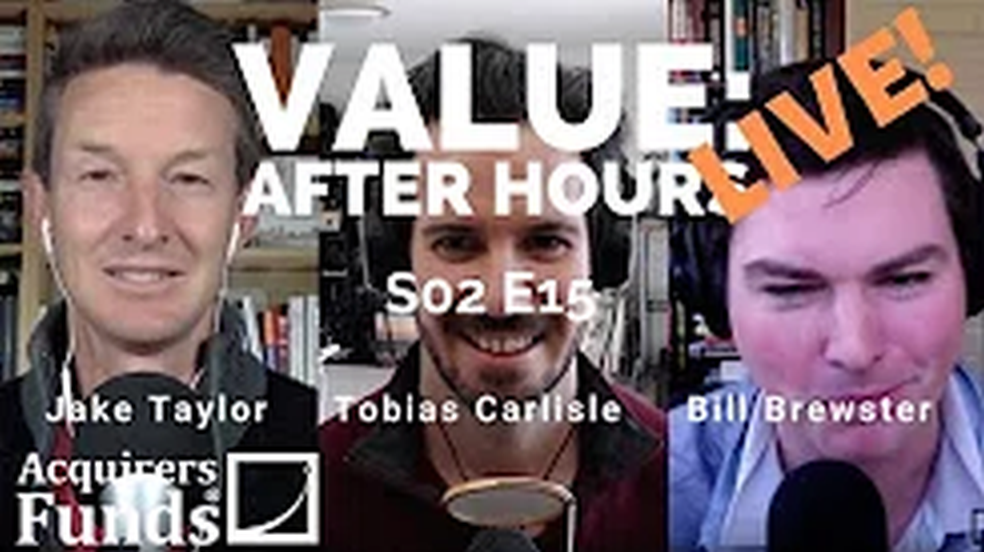 During their recent episode of the VALUE: After Hours Podcast, Taylor, Brewster, and Carlisle discussed How Focusing On The Market Can Be A Mistake If It Impacts The Way You Run The Portfolio. Here’s an excerpt from the episode:

Tobias Carlisle:
That’s a good point for a segue. I think it’s good to talk about what the market does, because I do think you at least understand, you need to contextualize where you are a little bit. You need to understand. It’s hard when you look at the portfolio and it’s down 30% and you’re just such a monk about this whole thing that you’re completely ignoring the fact that the market’s down 30% as well.

Tobias Carlisle:
That’s clearly you haven’t made a huge mistake. There’s something bigger going on. In that context you go and have a look at what the market’s doing. You might feel a little bit better about what you’re doing. But I think you need to be particularly careful as a value investor because… And just looking at the last 20 years for example.

Tobias Carlisle:
Yeah, exactly right. Well, you have a great article on that, which we’ll link to on the show notes when we do this. That opportunity didn’t… And now that we’re going to talk about that opportunity didn’t exist in 2007 because it was one of those things where it was such a good run from 2000 to 2007. Value actually got pretty expensive, and value was almost sort of generationally expensive at that point. A lot of that is why value’s had such a rough run since 2007, ‘8, ‘9. There was a bounce out of the bottom in 2009, but then values had a rough run over the last decade plus.

Tobias Carlisle:
But the important point through that 2007, 2009 period was November 2008 value basically started working, and you had four months where value was going ahead while the market was still falling over. Value rocketed again when the market actually started going up. It’s kind of interesting to watch. It’s one of the relationships that I watch and I’ve spoken at Chris Cole, he discusses he watches it as well.

Tobias Carlisle:
So I often think how real is this bounce, and I’ll go and look at a variety of different value investors and value indexes and strategies. So the last few days, value’s been participating very strongly in this bounce, and the market has been sort of less so. Then I look at things like FANG-M, and FANG-M has been a little bit flat to sort of not participating as much, which is kind of interesting, which makes me think that we may be starting to see that regime change to a slightly more value regime.

Tobias Carlisle:
I don’t know what that necessarily means we’ve bottomed or anything like that. It’s possible that it’s just value’s the accelerator, and value kind of takes off and then perhaps it sells off first as well, but it’s one of the things I often think about. Even though I have talked about the market quite a bit recently, partly because I want some bragging rights about not calling the bottom, even though I have see a lot of cats going to product. I’m not going to call it yet. I’ll call it in a year. I’ll call it in a year and two months or something like that.

Tobias Carlisle:
40% change, there we go.