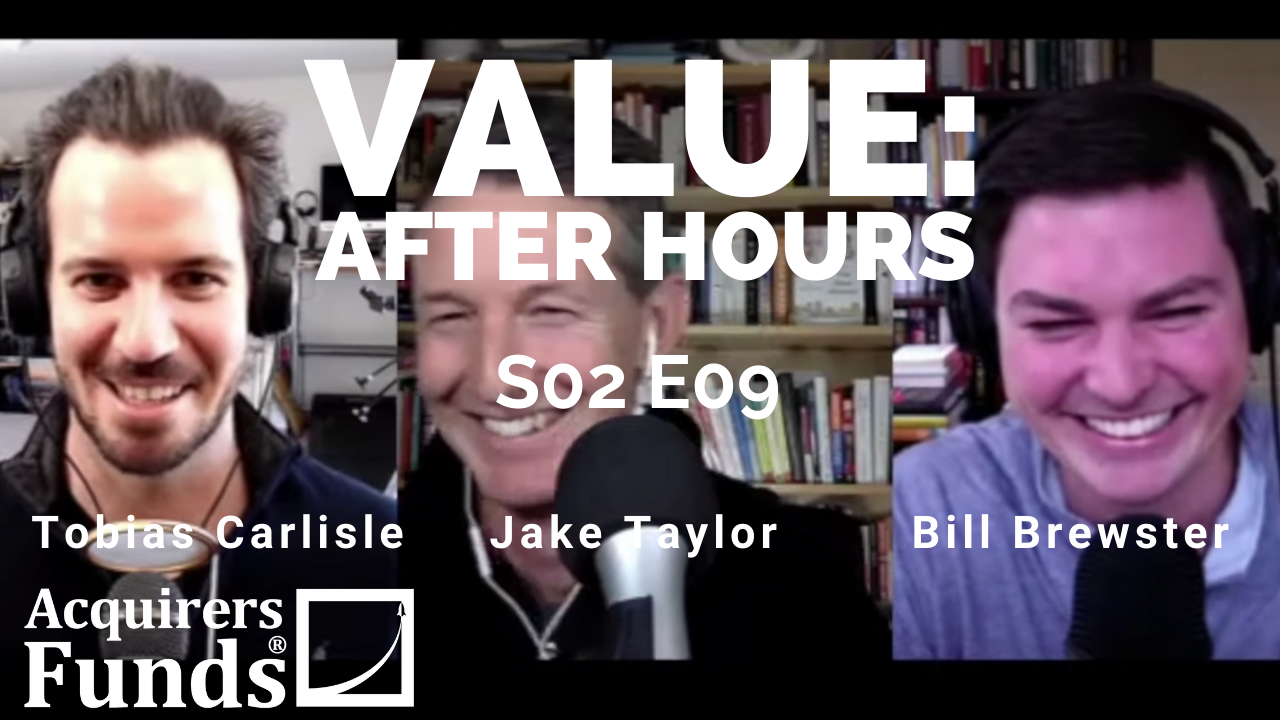 In this episode of the VALUE: After Hours Podcast, Taylor, Brewster, and Carlisle chat about why Josh Wolfe Is On A Line Between Sci-Fi And Sci-Fact. Here’s an excerpt from the episode:

Tobias Carlisle:
No, I like talking to people about… I like all that futurist stuff. I love science fiction, hard science fiction future. And I love the Josh Wolfe interviews for example. I love all of that. He’s like on some line between sci-fi and sci-fact, he says, he’s trying to see these things. I think all that stuff’s super cool. It’s super interesting, incredibly hard to invest in… the long term. I’ve looked at the longterm returns to angel, they’re not that good. Angels really hoard longterm returns to VC. Not that great. Unless you can get into those top quarter funds, and I think that the reason that they succeed so well is because it’s a signal for an entrepreneur and a startup to get an investment from Sequoia benchmark, whatever, and they do get the better cut of deals and they do a little bit better.

Tobias Carlisle:
I don’t think that they’ve got any better picking skills than anybody else. I think it’s incredibly tough. I think that what markets like this do is they make people forget that the objective when you’re investing is to find things that are mispriced. Whether you’re a value guy, whether you’re a momentum guy, whatever you’re doing, you’re finding things that are mispriced. What this market has done over the last five years is it’s rewarded that first order thinking where you say, “This is a really good business. I like Netflix, I like Amazon, I like Facebook,” and then you go and buy some, and that has done very well. Typically what gets rewarded is second order thinking. Where you say, “I like that thing.” What does Peter Lynch say? He says go and do a valuation. Oh, that’s really expensive, but no I like it. I’m going to watch it. I have pretty consistently over the last five years has been looking for mispriced things that hasn’t been rewarded, but it does work over the long run, that’s what I’m going to keep on doing. But I still love [inaudible 00:24:49].

Bill Brewster:
I guess that the one pushback that I’d give on that is some of these big tech companies have gotten I think a lot bigger than people thought that they could get, and a lot more profitable. I do think that there was an upward inflection. I agree with you on on many of the things that I look at that it’s just multiple expansion, but some of this has been like crazy growth that I don’t think [crosstalk 00:25:19].

Tobias Carlisle:
Microsoft, which has had… which has been doing very well and had lots of multiple expansion over the last period of time. You can go back the decade before and have a look at how it performed there. They’re doing pretty well through that period too. The revenue growth was roughly similar, but multiple compression did what happens normally to high growth companies that they see that high growth in the earnings, but they also see multiple compression because the market gets too far ahead. That is what has happened at almost every other juncture. It’s not happening at the moment. They’re getting multiple expansion. But I think that it’s almost a certainty that we’d go back into a market at some stage where high growth sees multiple compression, low growth sees multiple expansion. I don’t know when it’s going to happen, but I’m pretty confident that’s what happens.

Bill Brewster:
How do you think about some of the pushback that comes a value from the ROE perspective, or the low returns on invested capital? If you’re doing a value study, you’re rolling out of those every year, right? Is that accurate? I know that it’s… I’m trying to figure out [crosstalk 00:26:26]. When you read the studies, it’s not really like these businesses, if you hold them for five years, you outperform. It’s just in general the value factor if you keep rolling outperforms, is that accurate?

Tobias Carlisle:
The value factor is price to book. But let’s just say value generally, any low price to a fundamental, the back tests typically run rolling on an annual basis. I think the gold standard is lag that data’s six months, say you’re trading in June on the K data. Everything’s been disclosed to the market and then look at what the composition of the returns, and the composition of the returns over the next 12 months tends to be. The earnings fair value don’t do as well. They do seem to compress but less than the market anticipates. And so you get this multiple expansion. And that is typically how it has worked.

Tobias Carlisle:
When someone looks at my portfolio, they might say, “Well that portfolio is full of dog shit.” And I don’t disagree that those businesses are struggling. I think their balance sheets are very strong. They’re still generating free cashflow and they’re close to cyclical laws. What I’m trying to capture is an increasing return on equity, but from a compressed return on equity, increasing earnings, but from a trough, and an increasing multiple expansion.

Tobias Carlisle:
Last few years, for a variety of reasons, not all three of those have occurred at the same time, but I still think the businesses as a whole have [inaudible 00:28:00] you what the portfolio is like 11% free cash flow yield buying back about 6% of its stock growing at about 15% a year. That’s from my perspective. I like holding something that looks like that, I would buy a thing that looked like that.

Tobias Carlisle:
But it hasn’t been working. You can just see the… you can look at Hussmann has that chart that he publishes every now and again where he says, here are the 10 deciles and you can just look at how the 10 deciles have tracked over time. Last 18 months that value DSR has been falling in terms of its valuation. That most expensive DSR has been rising in terms of its valuation. That is what has driven over the last 18 months, two years value to underperform.

Tobias Carlisle:
Not saying that some of those very good companies don’t justify it. I said last week that I thought that it’s one of those unusual bubbles, or not bubble, sorry. One of those unusual booms where I do think that the ranking is roughly right. I do think that the better, more cash rich, fast growing high return and equity companies are the ones that are being rewarded. But I think that the train to make that investment, the point that you wanted to make that investment was roughly 2010 and you want it to get on that train. And that was when Jake had economic point of this out to me. Ford PE fair value in 2010 was more expensive than the Ford PE for the growth glamor DSR, for the expensive DSR.

Tobias Carlisle:
I’ve never seen that before. I didn’t notice it at the time, but I think that that explains a lot of the last decade of performance for that growth, glamor, expensive decile. And I think if that occurs again, then you want to be a growth guy at that time. But I think that if you look at the market now, and Cliff Asness has said this in his original Venial Sin paper, it’s like value was punished properly for eight years. Value’s been over punished for the last two years. And he says that now. That’s why it’s so stretched and now you want to be more of a deeper value guy. That’s my argument.