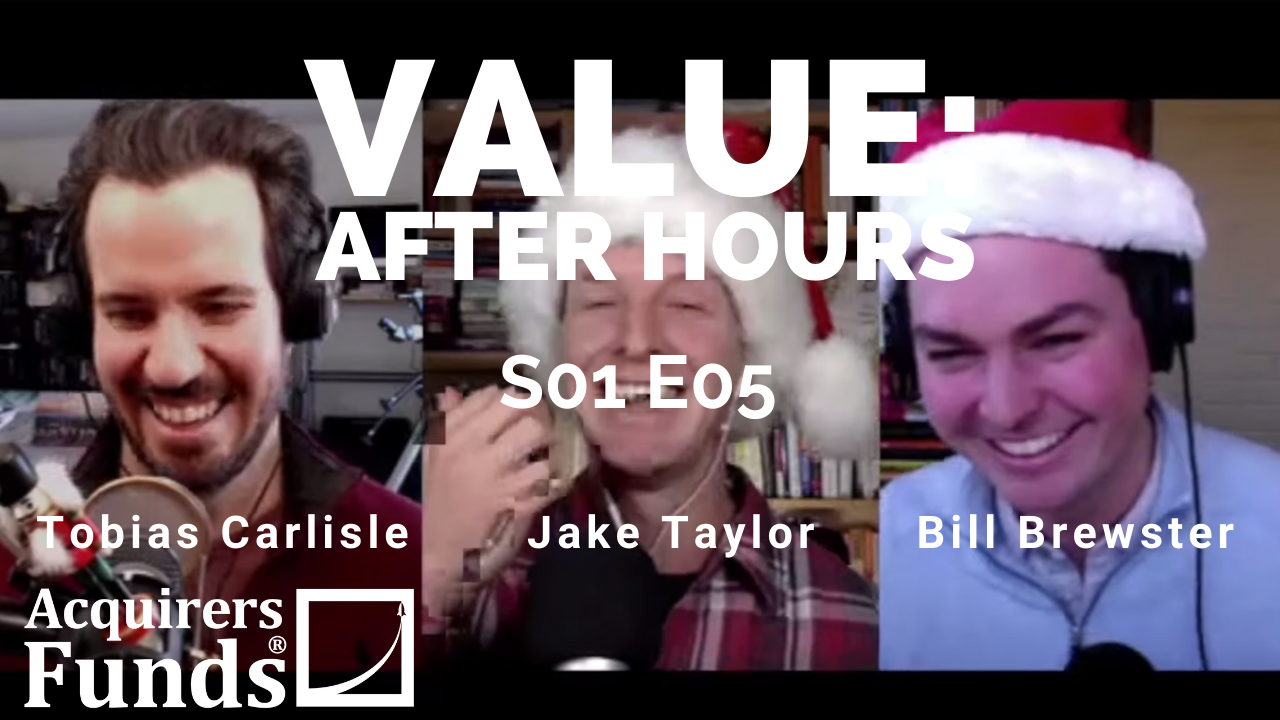 During this week’s episode of the VALUE: After Hours Podcast, Taylor, Brewster, and Carlisle discuss Michael Green’s Thesis On The Rise Of Passive Investing Causing A Melt-Down:

Tobias Carlisle: Alright. Let’s do my topic, which is Michael Green who has previously been at Thiel Capital. I’m not sure where he is now. I think he might still be at Thiel, I’m just not sure. He’s one of the smartest guys. You can see him on Real Vision interviewing Josh Wolfe and Chris Cole and lots of other guys who are very intelligent. Michael is a very, very smart guy.

Tobias Carlisle: I have heard his thesis about passive investing, which is basically, and I think it’s on Real Vision now and he’s been sharing it for a little while. He has this idea that as passive investing takes up more and more of the market. The ability for active investors to course correct or to push companies that get away from their intrinsic value back to intrinsic value diminishes such that passive takes over and it’s just flows that go to the biggest companies. The big just keep on getting bigger and the companies that don’t receive the flows are left behind. The upshot of all of that is that eventually you get this point where passive takes over the market. I think the tipping point could be 50% and we could be, I think we’re almost there. I’ve seen a few different measures. It could be a little bit lower than that, but there’s some measures that say we could be at 50%.

Jake Taylor: I find it to be very interesting in that part of the thesis is explained by older investors who are typically more inactive funds, who are selling for perhaps de-risk or even liquefy their portfolio to cover living expenses. They’re being replaced by younger investors. So, there’s a generational gap here that the younger investor is more prone to being a passive investor. We have a natural gradient between who’s selling and who’s buying and what are their styles. That only exacerbates this problem towards passive. I am very curious about how they do this modeling to figure out like where is the escape velocity, where are the singularity where all of a sudden there are no more people providing liquidity and all we have is buyers on the other side and no one, and that that buyer is now totally price insensitive because they’re an index and you end up with just that perfectly approaching full insanity mode. It’s rather shocking actually if you think through it as the way that Michael explained it.

Tobias Carlisle: Just the marginal buyer in order to get the next share that the price goes up. Yeah, the price goes up exponentially. You can look at, there’s some funny charts out there at the moment. If you look at the price at Ford price to earnings on the S&P 500 has gone vertical over the last three to six months in a material way. I don’t know if that’s evidence for what he’s saying, but it’s not disproving what he’s saying.

Bill Brewster: The Michael Green thing is really interesting. I found it fascinating to listen to. The thing I don’t fully understand is the flows go in a proportion to the existing allocation. Right? I don’t understand why active couldn’t set the price and move the proportion that the flows go in at. I could see a scenario, I guess, where if the price gets to a point where active just doesn’t want to take the risk but flows keep coming in because a bunch of people that are just doing passive to do it. I guess I could see a scenario where just flows take the market way out of whack, but I don’t know. Like Jake said, I need to see sort of model.

Jake Taylor: Isn’t it a Gresham’s law of logic though? Where as you drive out the next logical person who sees it getting disconnected from what it’s really worth, now there’s that next person that gets taken out that says, “Well, I don’t think it’s worth this. I’m going to sell to the index.” And then the next person, and eventually we run out of people who are logical and all we have left is the buyer.

Tobias Carlisle: You run out of lesser fools.

Tobias Carlisle: You run out of lesser fools.

Jake Taylor: We’ve run out of lesser fools and now there’s no one to provide liquidity because we’ve already driven them out. It’s now it’s all index and now the price can go askmetonic because we don’t have any, there’s no liquidity to, there’s tons of bid, but no shares to be supplied.

Bill Brewster: You’ll see me on the ask… I’ll be having really low ask out there. Right?

Tobias Carlisle: I haven’t said this to-

Bill Brewster: Oh, wait. No, bids, I guess. Not ask, my bad. Tilde market-maker. But yeah, my whole theory is if he is correct and he’s saying that there’s going to be no liquidity, then you might have to set yourself up as the liquidity provider and just throw out really low bids on these stocks. And if people want to sell, they got to sell to somebody so maybe that’s okay, I don’t know.

Tobias Carlisle: They’ve sold it to the index provider, don’t they? Because there’s a constant bid under these stocks and it’s going to go vertical.

Jake Taylor: Yeah. That’s the part that comes after the vertical and then, you want to be the really low when everyone wants to get out then at that point, that’s when you provide the bid. But in the meantime-

Bill Brewster: Get levered, get along.

Jake Taylor: How, yeah. In the meantime, YOLO, right?.

Jake Taylor: It really is a recipe. It’s very easy for me to imagine a scenario where we look back at this time period and go, “What were people thinking? That was so obviously stupid.” Everyone can’t index at the same time. It would never work. And yet, we just kind of do it.

Tobias Carlisle: Michael is going to come on my podcast. It’s a little way away. It’s a couple of months at the moment and so I haven’t said this to him. I sometimes think that finance guys forget that the market… Sorry, I’m just, he doesn’t get a chance to respond to this. He will in due course, but I think they forget that there are, the stock market is not the only thing out there. If undervalued stocks don’t catch a bid. From my perspective, that’s great because I’m going to go around and hoover all of those companies up. I’m relying on the fundamental performance dividends and growth in a book value and so on to generate my return. It’s kind of ideal for me if they don’t, if some of these good companies don’t catch a bid just by virtue of the fact that they’re smaller members of the index, that’s great. Isn’t it? Why is that bad for a fundamental guy?

Jake Taylor: No, it is. It’s setting up to be absolute premium time for a fundamental discretionary investor who can take the pain though of underperforming against an askmetonic index. So really, I think my prescription would be to, if you are measuring yourself, don’t compare yourself to the index probably over the next couple of years and just focus on doing smart things, finding things that are undervalued by those, getting long patients and I think you’ll be rewarded for it. But if you’re trying to keep up with everyone else and that you have FOMO, I think you’re likely to really take it in the shorts.

Tobias Carlisle: There’s a chance that at some stage the dividends just get so material to the most undervalued stocks. There’s private equity and other guys out there. Private equity will take these companies private because they’ve got lots and lots of dry powder. That money’s really cheap. There’ll be able to take them private at a pretty significant premium. II think that would still be a good environment for a value guy.

Bill Brewster: Who might get screwed in that is the people that can’t invest in private equity though, right?

Tobias Carlisle: But, you can invest in a value fund.

Bill Brewster: That’s right. You do have to show up to the annual meeting if you do that though. No, I don’t know.

Tobias Carlisle: For those who don’t know, Jake’s a holder of Biglari. Have we discussed it on this podcast before?

Jake Taylor: No, we haven’t and I’m not sure we will. I don’t need that kind of confirmation bias.

Bill Brewster: To be fair, you’re in the green last time we talked about it though.

Jake Taylor: I’m not going to say one way or the other.

Tobias Carlisle: It bottomed around the idea, it’s currently about $115 so there’s a good chance Jake’s in the green.

Bill Brewster: Yeah. We might have to edit all this out.

Tobias Carlisle: I’m not. This stays.