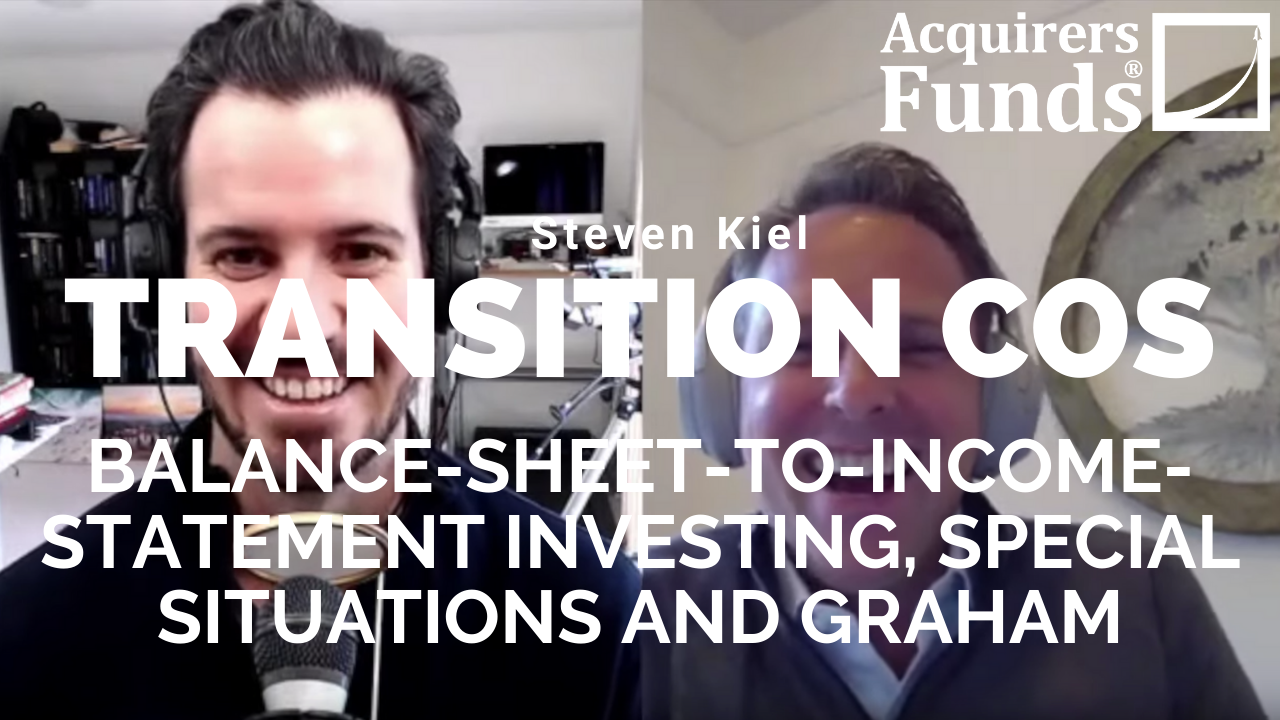 During his recent interview with Tobias, Steven Kiel of Arquitos Capital discusses investing using a Buffett Partnership style strategy. Here’s an excerpt from the interview:

Tobias Carlisle: So, these are all particularly interesting positions, how do you transition from being a lawyer to being an investor in things like this?

Steven Kiel: Yeah. So, I mean it’s a good question, and I always was interested in things like this. Going back to even before I graduated from law school as a personal investor, I was always interested in niche things and idiosyncratic things. Things that are maybe not well know, companies that are not average, would not have been well known from the retail investor. And that goes back to probably the late ’90s, early 2000s. And I always appreciated the Buffet Partnership Letters more than the Berkshire Hathaway Letters.

Steven Kiel: We all can kind of point to Buffet one way or another as some sort of inspiration. And I read the book I think it was back in 1996, The Lowenstein Book, Making American Capitalist, and remember reading that, and being more interested in the portfolios from the ’50s and ’60s than buying say Coca Cola in the ’80s. So, I always gravitated towards those unique situations.

Tobias Carlisle: That’s funny, because when I was reading through your letters I had that, you discuss workouts and control situations, and I thought this language is very reminiscent of the Buffet Partnership Letters.

Steven Kiel: Yeah, I try to stay away from the word wonderful though, because somehow you transition from workouts and everything like that, to buying wonderful businesses at reasonable prices, which is whatever that value investors have turned into today, the word value means whatever people want to define it as. But I try to stay away from some of the more colloquial words like that.

Tobias Carlisle: It’s funny, I know it well and I’ve talked about it a lot, but that Buffet Partnership Buffet is a much different investor from the latter day Berkshire Buffet where he was in essence a corporate raider, a liquidator, he’d get control, he was pretty ruthless when he was in those early years and he’d transitioned. But I think even in the later days now where he’s in that wonderful company the Fair Price. The Fair Prices that he likes it’s still pretty cheap I think for many of the positions, a lot cheaper than a lot of modern day value investors seem to be prepared to pay anyway.

Steven Kiel: Yeah, absolutely. And he talks about the transition kind of being made into a little more of a Phil Fisher style of investor because of Munger, but if you look at Munger’s partnership back in the ’60s and early ’70s, I mean Munger was not that type of investor either. Munger was primarily a special situation investor and he had some fascinating investments with Garren and had some with Buffet as well.

Steven Kiel: But Monger took over a closed-in fund, he did a number of obviously blue chip stamps at the time too. And he was concentrated, the rumor is that, I don’t know how true this actually is, though people reference it from the Munger book, that at one point he had more than 100% in one stock, so he was levered, he was obviously much more volatile than Buffet, but at one point he apparently had more than 100% in one stock. So, he’s always been much more concentrated.

Steven Kiel: But even Buffet himself was concentrated, I mean the American Express position back in the [inaudible 00:36:55] scandal days, I think it was 50 or 60% of the portfolio. So, somehow hedge funds turned into an asset class over the last 50 years, and they turned into this portfolio that is kind of a glorified mutual fund. And that’s not what I’m trying to do, I’m trying to do things that would have been done in the ’50s or ’60s, in the era of the Buffet and Munger and Garren and others like that.

Tobias Carlisle: One of the things that I noticed from your letters too, is how small those partnerships were. I think you said Munger had 11 million, and Walter Schloss, how much did he have in his fund when he closed it down, or sort of later on?

Steven Kiel: Yeah, something like, I forget was Schloss had specifically, but it was also not very large. And if you think about in today’s dollars, Munger I think was 50, 60, 70 million in today’s dollars. Schloss was somewhere around there as well, Schloss was much more diversified of course. But even Buffet, was what three or four hundred million or so at one point, kind of in today’s dollars. And maybe eventually made it up to about a billion but that was through appreciation alone. And there’s a lot of billion dollar hedge funds today. And back then it would have been one of the largest, if not the largest, fund at the time. Certainly size limits what you can do, absolutely.

Tobias Carlisle: And Buffet’s investments were reflected, the size of his fund reflected those investments though. I’ve gone through and particular, even when he was talking about the transitional type investments like American Express, the rest of the portfolio was these tiny net liquidation positions.

Steven Kiel: Yeah, Dempster Mills and others like that. Yeah, and these were companies that were obviously not… I mean even the Berkshire Hathaway at the time, and others like that. And you can certainly do more gram related things, and back then valuations were much, much cheaper on the balance sheet side than they are today. But you could do those types of things as well, so I think you can still do them today, you just have to be concentrated.

Steven Kiel: You know, West Aim, [inaudible 00:38:58] Capital, Enterprise Diversified, or I own a company called [Pindroll 00:39:02] that went private about a year ago, and it’s a cash box, and it trades at 75% of net cash, trades at 150, 160 thousand dollars a share because they did a reverse split. But there’s still things like that out there, but a lot of them turn into what they call one day stocks. They’re at a particular price.

Steven Kiel: Pindroll for example is just going to be where it is at, and then one day it’ll do a transaction and it’ll go public again. And it could go up three or four times from where it trades at now or where it’s valued at now, based on that transaction. And it’s kind of interesting but it also requires discipline on your part as a portfolio manager, it requires alignment from your investors as well to make sure they have an appreciation for what you’re trying to do, knowing that there could be volatility on the results, that doesn’t mean there’s volatility on the operations though.