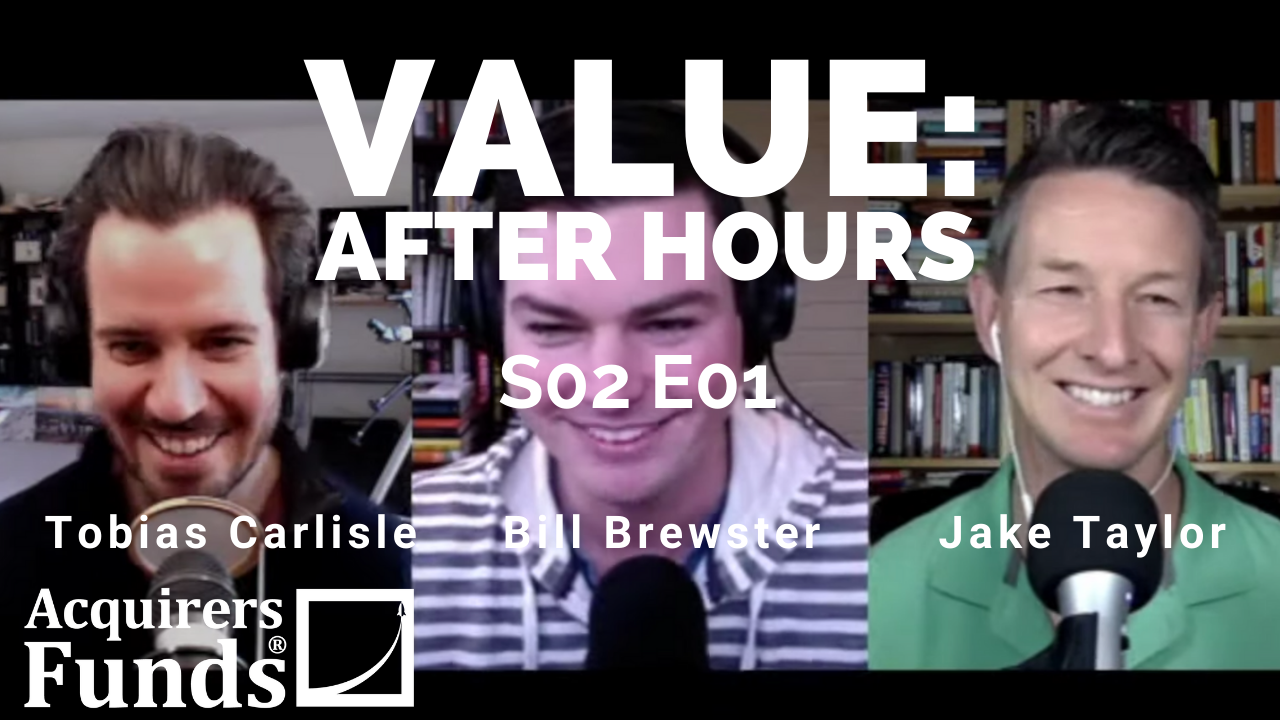 During this week’s episode of the VALUE: After Hours Podcast, Taylor, Brewster, and Carlisle discuss how you know when you’re ready to start your own fund and run outside capital:

Tobias Carlisle: I forget which movie it is, but they talk about the American businessmen, they make these great leaps whereas the Japanese businessmen… Actually, it’s Rising Sun and it could be the book, Michael Crichton talking about it, he says that American businessmen make great leaps. Japanese businessmen kaizen, they just keep on improving all the time. And I think that that’s a great approach, but I think you’ve got to do both. You got to try and make the great leap and then when you make the great leap, you got to kaizen as much as you can. Tiny little improvements over and over and over again until you get something that’s where you want it to be. Because if you wait to launch when it’s kaizen, you never get there, it never launches.

Bill Brewster: There’s a push and pull to that, thought. I mean, we’ve talked about what am I doing and where does it go, right? And I would not have been ready, certainly, to run outside capital two years ago, probably 12 months ago. I mean, I know that you’re supposed to be like, “Oh, I’m the best ever,” but I don’t know for certain that I’m ready today, right? I think I’m a lot closer than I was, but I only want to pull that trigger once. That’s not something that I want to prematurely bet and then get better.

Bill Brewster: And then the flip side of that is, well, to your point, how do you ever know you’re ready. I think I know that I’m a lot closer than I’ve ever known before, so. I don’t know.

Tobias Carlisle: Well, here’s a good question. What is the difference between running outside money and running your own PA?

Bill Brewster: Right? I mean, you’ve got people work really, really hard for it and it’s one thing to lose… I think I could pick myself back up. I don’t want to be responsible yet for other people needing to do that. And I don’t think that I would do that to them, but I only want to make that bet once. And I’m sure everybody else only wants me to, also.

Tobias Carlisle: How about you, Jake?

Jake Taylor: The difference for me is the level of responsibility that I feel. I mean, kind of like what Bill said, you know that you could work harder later if you had to or take a different job or… It’s your fault if you lose it, but the… I think maybe the reputation part for… would be really hard to do poorly and washout. You would just feel so bad. You’re letting down all these people who trusted you. That’s an awful proposition.

Tobias Carlisle: Yeah, in practical terms, I think what that means for me is I would size everything much smaller and I’d have much more diversified portfolio in outside capital. I would never size anything… I’ve seen some guys who come out of the blocks really quickly because they’re very aggressive and aggressive in positions that are volatile and slide around a lot and they put a lot of capital into them and get a little bit lucky sometimes, get a great track record, and then never ever, and that’s luck, but then never diversify out, consolidate, never do anything like that and just run into a brick wall. Massive trap.

Bill Brewster: Yeah, and, well, it’s so important to have the… I mean, it’s… You have to be in the position to do it, but having the right partners is, I think, crucial to being successful. Especially if you’re running a concentrated book because concentration works real well when it works, but when it doesn’t work, you better have people that believe in what you’re doing. Because then they’ll just run from you, right?

Jake Taylor: Toby, you’ve done different modes of investment vehicles. Do you feel different levels of responsibility between them?

Jake Taylor: Well, I feel like, too, with your approach, you tell people exactly what you’re going to do, you show them why it’s worked in the past, why you expect it will work in the future, and you do it and if it doesn’t work out, well, shoot. What were you supposed to do? Like I did exactly what we all agreed was the right thing to do.

Tobias Carlisle: Yeah. I mean, that doesn’t suffer from not working out, though.

Bill Brewster: Yeah, but what I… I mean that’s what I love…

Jake Taylor: They can’t be mad at you, though.

Bill Brewster: Yeah, and what I love about your strategy and what Jake and I have talked about, right, is it’s like you just kept peeling back the onion, got to your answer, and then you’re like, “This is it. This is my answer.” Right? And then, to Jake’s point, it’s transparent. Nobody…

Tobias Carlisle: That’s what I wanted to…

Bill Brewster: I don’t think people could ask for much more.

Tobias Carlisle: The reason I did it that way is when I started out, who am I? Why would anybody trust me at all? I have no expectation that anybody would, so I’m going to say, “Look, this is the process that I go to to come up with the answer that I have and this is what I’m going to…”

Tobias Carlisle: And my definition of a skillful investor is one who executes on the program that they’ve told everybody else that they’re going to do. That the food inside the can matches the wrapper on the outside of the can. That, to me, is a skillful investor. I told them I would…

Jake Taylor: That dog food, though, you’re feeding them.

Tobias Carlisle: Well, but the idea, the product…

Bill Brewster: As long as you’re willing to eat it.

Bill Brewster: No, that makes sense.

Tobias Carlisle: I said to my wife after we had launched and everything was going basically according to plan, I said, “This is really nice. The strategy tracks value pretty well.” And she said, “I didn’t even know that there was a risk that that could not happen.” I was like, “Yeah, sorry, that was also a risk.”

Bill Brewster: Well, the other thing that’s tough, too, is like… I mean… How many people manage through a real draw down?

Jake Taylor: What are those?

Jake Taylor: What is this that you’re talking about?