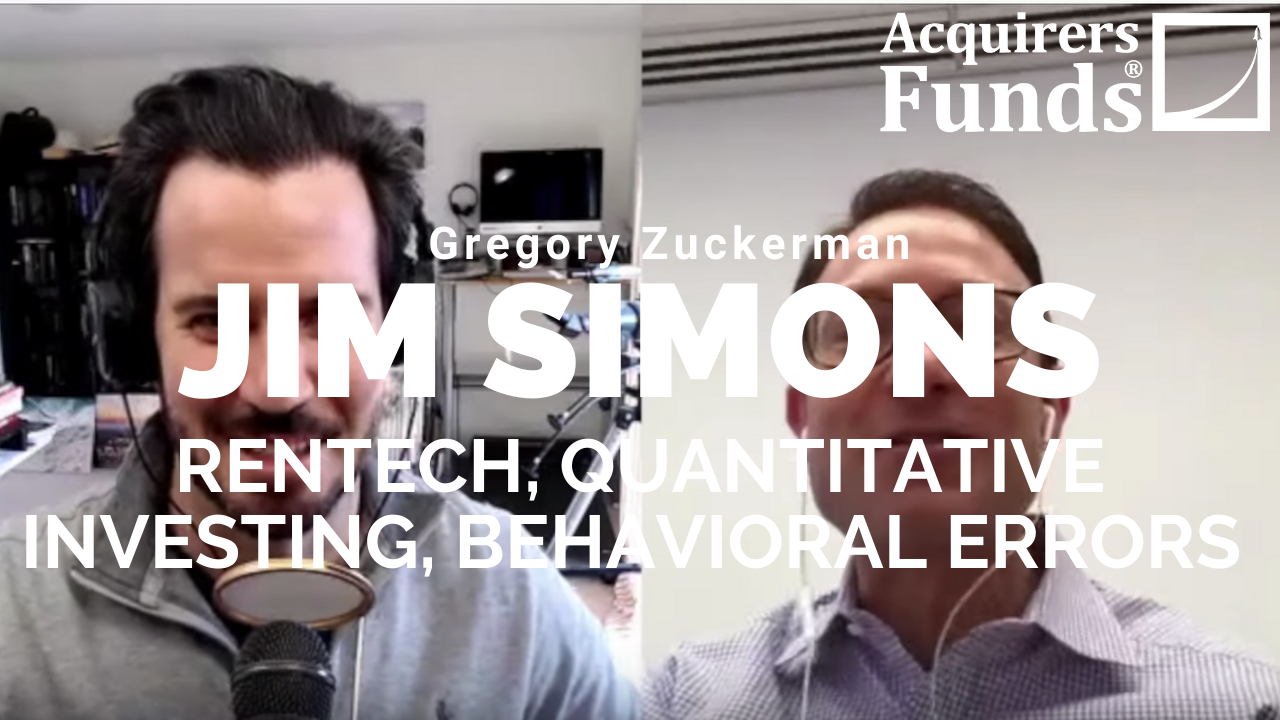 During his recent interview with Tobias, Gregory Zuckerman, author of The Man Who Solved the Market, discussed how being too big in investing leads to under-performance. Here’s an excerpt from the interview:

Tobias Carlisle: You pose some great questions at the start of the book and I’m interested to know your answers. What does it say about the markets that mathematicians and scientists do a better job than veteran value investors or veteran investors?

Greg Zuckerman: Well, taking a step back, there’s a paradox behind my whole book, which kind of drives it. I only was conscious of it sort of halfway through my research that it shouldn’t have been these guys who had these crazy returns because they’re mathematicians, they’re scientists. They’re not people that care about investing and care about the markets. Most of the time, they get hired to join the firm because they’re looking for an intellectual challenge. Once they get there, then you fall in love with the money, but they’re not there to get rich. They’re like, they are humans. You see the cars going from Mazdas or whatever, Hondas to Porsches. You could see that in their parking lot, but it shouldn’t have been these guys. It should have been somebody who cares about investing. Someone who got an MBA, someone got CFA.

Greg Zuckerman: Someone like myself, who I’ve always been fascinated by investing in investors. I was reading Barron’s and Wall Street Journal as a little kid and all that. Those guys had no, it was beneath them almost. They’re scientists and they didn’t want to waste their time. It should have been those individuals. So the question is why? What do we all have? What are we doing wrong? Part of it, I do think is the reliance we have on judgment. I’m a big believer now and as I said earlier, turning decisions over to models. It’s not just when it comes to investing. If you think about the most important decisions today by the Fed, by in White House, et cetera, a lot of it is still using judgment and instinct whereas the most successful companies are Tencent and Amazon and Netflix where they’ve got these dynamic models that they turn the decisions over to.

Greg Zuckerman: That’s one of the lessons for me, not just as an investor, but as a human. It’s not to say that you can’t have some sort of combination of the two. It’s not to say that there aren’t corners of the market where there are inefficiencies and you can still as a human take advantage, but they’re few and far between. That also speaks to another theme as you would ask me what lessons to me. The lesson there is that the market is a lot more efficient than I might have thought. You might think, “Okay, these guys have these crazy returns. It proves the market is inefficient.” I get that and Simons thinks the market is inefficient if you speak to him. But, I would argue that in some ways their success proves how efficient the market is in that. They only get a ride a bit more than 50% of the time and they’re short-term traders and not long term traders. They’ve failed as long-term traders. It didn’t really work and they had to shift gears.

Greg Zuckerman: If these guys who are the best and the brightest, the smartest scientists and mathematicians, they recruit from all over the world, they only get a right a bit more than 50% of the time. They use a lot of leverage and that helps them. They cap their fund is really important. There’s a lesson there too. Some people say to me, “Well, Greg, you can’t compare Simons to Warren Buffet. Buffet’s managing a company that’s 300, 400 billion or you can’t compare him to other investors managing tens of billions whereas this Medallion Fund, the Key Fund is at $10 billion. I would counter by saying, “No one’s forced Warren Buffett to get so big.”

Greg Zuckerman: I wrote this earlier book about John Paulson. It’s called The Greatest Trade Ever and he pulled off the greatest trade in human history in modern financial history where he made $20 billion over two years anticipating the financial meltdown and I give them a ton of credit for this trade. But then afterwards, he, sorry, it’s AUM soar, he got up to like close to $40 billion and his returns plummeted because he thought he’d be the exception and he got away from how we invest. There are all kinds of reasons why, but that’s another lesson there and investors never subscribe to that. The fact that you’ve got to keep your AUM down to a level where you could actually outperform the market. There are smaller investors that are able to beat the market.

Greg Zuckerman: But time and time again, I see it. I’ve been on The Journal 23 years, you see big investors who believe, “Well, I’m going to be the exception. I’m going to then be the one who’s got the hedge fund and mutual fund that keeps taking in money and outperforms in it.” It doesn’t work. And Simons, somehow he had that instinct and he realized that they couldn’t get too big unless they were going to give up returns. They didn’t want to do that.

Tobias Carlisle: It’s slightly off topic, but the Paulson book was interesting because he started off as a merger arbitrage and then he had a trade that was a little bit out of the ordinary for him. Then, he seemed to turn into a global macro guy with a big gold fund and various other things. I don’t know how successful he was as a merger arbitrage subsequently, but he got that trade right. Maybe that’s all you need. You just need the greatest trade ever.

Greg Zuckerman: True. See, I would argue people criticize Paulson and they say, “Wow, he was a one-hit wonder. Yeah, Zuckerman you wrote about that one hit.” I don’t see it that way. I see him, he was a very successful investor, not very successful. He was a singles hitter. He was a successful merger arb, but he had a really interesting approach. It was one that worked and he will try asymmetrical trades. Trades with limited downside and huge upside and he did it with mergers. He would get into merger deals and there were announced that had a potential third party to come in. Worst comes to worst, it was announced deal is probably going to go through, but the upside is great if another party came in.

Greg Zuckerman: He applied that same strategy to the mortgage trade because he’s buying credit fault swaps. To me, I don’t give him that much credit for being bearish on housing as I’m sure you recall, there were a lot of people bearish on housing.

Greg Zuckerman: But, I do give them a lot of credit for is figuring out how to express this trade better than almost everybody. They’re all kinds of really sophisticated mortgage guys who didn’t put on this trade, didn’t really figure out how to use credit default swaps in the right way. His colleague, Paolo Pellegrini, did. It was the same strategy looking for an asymmetrical trade. Worst comes to worst, you’re paying out credit fault swaps and you would lose money but not a ton. And the upside was remarkable. So he does this remarkable trade and make $20 billion and he got away from his strategy. He started doing, like you said, he became a global macro guy. He bet on gold. I mean, what’s gold worth? It’s hard to tell and it’s got upside, it’s got downside. He got into bank stocks, he got into pharmas and he got away from how we always invested.

Greg Zuckerman: It wasn’t so much that it was a one-hit wonder and he got lucky. I would argue that he really veered away from how he always invested. There’s a lesson there too and isn’t everybody’s hubris is not something that, it’s something that many investors fall into that trap, He clearly did. He thought he could be the one who could manage a fund, that hedge fund at $40 billion. I can figure out pharma and banking and all these other kinds of stuff and it’s a reminder not to get too big. It was a reminder to stick to what got you there.

Tobias Carlisle: I got to say just I slightly disagree with you that he got the asymmetric trade wrong because for Paulson personally, that gold fund was an asymmetric on gold. He had virtually no downside, but his upside was extraordinary personally, if he got the carry on them.

Greg Zuckerman: As a manager, yeah, you’re right. It’s sad to me, right? A lot of these guys, you can say all kinds of people. You could say HUR is the best investors out there today because they’re a great marketing shop. The returns aren’t great. Och-Ziff, all kinds of firms. I can go on and you bring it up that-

Tobias Carlisle: You could have raised Cliffs… I don’t think he get a nasty tweet from Cliff.

Greg Zuckerman: Yeah, listen, he’s a big boy. He can what he can’t. He’s very sensitive. To where these billionaires are so sensitive. I’ve seen it in my own work.

Greg Zuckerman: They’re human, I guess. But you would think at that point, you’ve done great. It’s knock on him. He’s built a great empire, but the returns aren’t nearly as good as many others. It’s a different approach. Other people built successful firms. But you were saying that as a gold fund, as a manager, he’s done well. I guess. But, I look at it sort of on returns, what he’s doing for his investors. John Paulson, I’m talking about in particular. And ultimately early on, he was very early golden. He got that run up, but ultimately it didn’t help as it. And, the reason was wrong, he expected inflation. He thought that money supply expansion would lead to inflation. So yeah, he was right that gold started soaring and he made a fortune early on, but it was not for the reason he had expected.