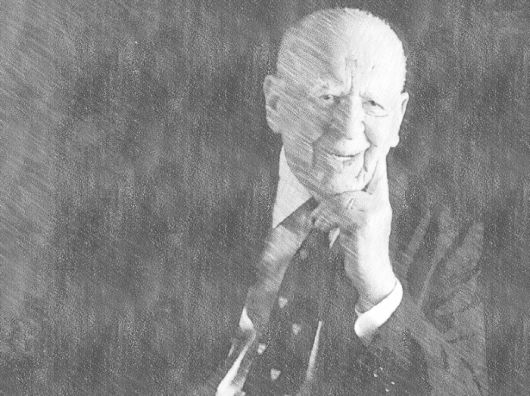 Late last year The Telegraph did a great piece on value investing legend Philip Carret, who Warren Buffett described as one of his hero’s.

After founding his Pioneer Fund in 1928, one year before the great depression, Carret successfully steered his fund consistently upwards through the Great Depression and the Second World War and his career ultimately encompassed a total of 31 bull markets, 30 bear markets and 20 recessions.

Carret was one of the first to write about “value investing” in a series of Barron’s articles in 1927. He developed this concept in his 1930 book The Art of Speculation, where his “12 commandments for speculators” first appeared.

This is a must read article for all serious value investors that includes Carret’s twelve investing commandments and five of his most famous quotes.

Philip Carret may not be a household name in Britain but Warren Buffett called him “one of my heroes” and said he had “the best long-term investment record of anyone in America”.

Carret, who founded one of America’s first investment funds, now a multi-billion-dollar giant, and invested right up to his death in 1998 at the age of 101, initially swapped investment ideas with Warren Buffett’s father when the future “Sage of Omaha” was just a child.

But his debut as a full-time investor came about almost by accident.

Philip Carret was born in 1896, the only child of a lawyer and a social worker. Although his parents had a good income, they weren’t very adept at managing money and Carret decided at the age of 16 that “if I were ever to gain wealth, it would have to be by my own efforts”, according to his book, A Money Mind at 90.

In 1924, aged 28, he started to invest money for family and friends, who saw that he had a knack for finding winning stocks. He frequently ignored Wall Street analysts and researched companies himself, reading extensively.

Frank Betz, who was Carret’s personal assistant in the Eighties, recalled that he read voraciously – not just corporate reports and newspapers but also books on philosophy, history, economics and biographies. Carret claimed to glean the most useful information from the detailed footnotes appended to corporate annual reports.

Although his first job in finance was as a bond salesman, he became a journalist in 1922, writing for Barron’s, a new weekly financial magazine owned by Clarence W Barron, considered the founder of modern financial journalism.

Carret was one of the first to write about “value investing” in a series of Barron’s articles in 1927. He developed this concept in his 1930 book The Art of Speculation, where his “12 commandments for speculators” first appeared (See box below).

A chance conversation and America’s first stock market fund It was while he was working as a journalist that Carret heard by chance about plans for the first “open-ended” stock market fund in the US, the Massachusetts Investors Trust.

Founded with $50,000 in 1924, the trust still exists, although it now has assets of $3.4bn (£2.6bn). The story goes that one of the trust’s founders, L Sherman Adams, visited the Barron’s office one day and Carret couldn’t help overhearing him describe his idea for a new investment company.

Inspired by this, in 1928 Carret put his own ideas into action and founded the Pioneer Fund. This spawned Pioneer Investments, now a giant global fund management firm.

Among the fund’s first investments were blue-chip shares such as Maytag, a washing machine maker, and Firestone Tire & Rubber. But it was a bad year to start a fund: the 1929 crash and the Great Depression soon followed and an investment of $1,000 in the fund in 1929 would have been worth just $470 by 1932.

After that shaky start, Carret steered the fund consistently upwards through the Great Depression and the Second World War and his career ultimately encompassed a total of 31 bull markets, 30 bear markets and 20 recessions.

His fund was also among the first US portfolios to invest internationally. In 1963 he founded Carret & Company (now Carret Asset Management), which provides investment services to wealthy individuals. Carret sold his stake in the firm in 1988 but continued to work there, without a salary, for three days a week until his death.

Carret’s connections with the Buffetts

Carret first encountered the Buffett family in the Forties when he would visit Warren’s father, Howard Buffett, who ran a small brokerage firm in Omaha, to swap investment ideas.

Later, Warren Buffett’s company, Berkshire Hathaway, became Carret’s most successful investment. He bought shares in the Sixties for less than $400 a time because he was impressed with Buffett’s management. The shares now trade for more than $220,000 each.

At the 1996 meeting, Buffett said of Carret’s investment style: “The main thing is to find a wonderful business, like Phil Carret always did. He’s one of my heroes, and that’s an approach he’s used.”

One of Mr Buffett’s most famous quotes is “Only buy something that you’d be perfectly happy to hold if the market shut down for 10 years”, and it has echoes in Carret’s own approach, outlined in The Art of Speculation: “I have a very simple strategy, I buy good companies at attractive prices. Then I sit on them.”

Some of Carret’s stock picks

Carret would buy a particular share only if he thought he could double his money – but he was in no rush. In fact, he scoffed at other, younger fund managers who held a stock for weeks, or even days, calling this “the pinnacle of stupidity”.

Along with a desire for firms that had steadily growing earnings and strong balance sheets, he looked for committed managers who owned a hefty stake in the company. He would look for investment ideas in unlikely places.

John Carey, executive vice-president at Pioneer Investments, who worked with Carret for almost 20 years, told Telegraph Money: “In this business you need to be eclectic and opportunistic, paying attention all the time, because you never know how an idea might occur to you, or where you might get information about some new trend. ​

“Carret would sometimes look at new products on the shelves at the store and he would talk to people and he would read newspapers and periodicals and just gather information in every way he could think of. Then he would filter it through his mind and financial screens and come up with ideas for potentially profitable investments.”

So which shares did he actually buy?

A good example was Greif Bros Cooperage Corporation, which Carret bought on the recommendation of Howard Buffett in 1946 and held for 48 years.

This wooden barrel maker wasn’t a traditional value play and the company’s growth was unspectacular, so it was the kind of boring business that most investors would avoid. But it was a classic Carret stock: a steady grower with steady management, bought at a reasonable price.

The company fitted the Carret criteria of a strong balance sheet, a good position in a niche market, and a strong management team – in fact, the same manager runs it today. Carret bought the shares for 68 cents and they now trade at about $46.

He bought Neutrogena in 1972 for about 85 cents because he sampled the soap in a hotel room and liked the management of the company. It was taken over by Johnson & Johnson 22 years later at $35 a share.

Both choices chime with Carret’s answer to a question he was once asked in a television interview: “What is the single most important thing that you have learned about investing over the past three quarters of a century?” His reply: “Patience.”

You can read the original article at The Telegraph here.