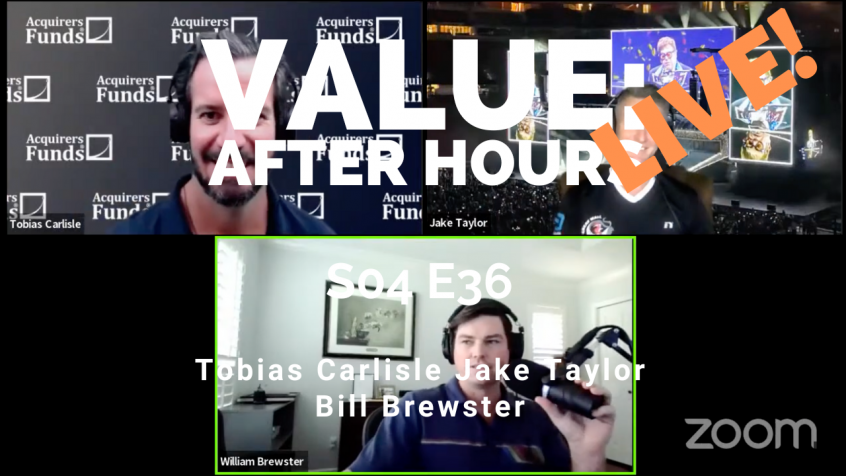 In their latest episode of the VALUE: After Hours Podcast, Brewster, Taylor, and Carlisle discuss The Reason Analysts Systematically Overshoot On Earnings. Here’s an excerpt from the episode:

Tobias: I got a Verdad piece here. This is their most recent one. Sages of Wall Street. It’s called by Brian Chingono and Greg Obenshain. They looked at a 2001 paper, Chan et al. “Authors state that it is commonly suggested that one group of informed participants, security analysts may have some ability to predict growth over long time horizons. However, there’s little forecastability in earnings and analyst estimates tend to be overly optimistic.” So, they tested it themselves. They looked at 1997 to 2021, “Median analyst estimate for growth over two to three years across a range of metrics.” And then, they compared it to– this what I thought was kind of interesting. They looked at– [crosstalk]

Tobias: Yeah. Their GDP number was quite high. I’m just trying to find how they justified that GDP number. Yeah, replaced the analysts forecasts with a naive estimate that corresponds with long-term GDP growth since 1947. So, I guess, that’s a good date to start. US GDP growth has averaged 6.3% per year on a nominal basis, including inflation of around 3.5%. Did you have any idea why it’s as high as that? That’s stock market returns.

Bill: Yeah. It helps to start when you bomb the entire competition.

Tobias: Just after World War II coming off a low base. Yeah. So, there’s probably a lot of front end loaded. But that’s a very high number. 6.3% and then inflation, 3.5% of that.

Bill: [crosstalk] you got the baby boom.

Tobias: Yeah. It’s much below that now. What are at now? 2% or something like that?

Tobias: Basically, they run this. As you can imagine, the naive forecasting is by far and away the best– just using 6.3% is the best estimate. It’s still a little bit over optimistic there for that 1997 to this period. It’s missing by 4.6% over three years for EBIT. So, this is their conclusion. It turns out the naive estimate of GDP growth is much more accurate on average with a median error of being within a few percentage points of the actual outcome. On the other hand, analyst forecasts tend to overshoot the mark by 20% to 40% on average, when predicting earnings over two to three.

Jake: So, strong to quite strong? [laughs]

Tobias: When you’re doing your DCF, 6.3 whether it’s a coal company or a SaaS company.

Jake: Here’s a real question. I’m not trying to troll or anything, but do people spend a lot of time looking at analyst estimates?

Bill: Well, it’s a freaking consensus. It’s a sell side, right? Who gives a fuck what the sell side thinks? They have to pump their shit. I’d be more interested in– [crosstalk]

Jake: That’s what I was trying to ask– [crosstalk]

Bill: I’d be interested to see an aggregate buyside estimate. If firms would open up their books and let people actually see what they’re truly underwriting. I think that would be a more interesting study.

Tobias: You can see it employed in the prices that they pay, can you?

Bill: Oh, yeah. But I guess, you can back into it. It’d just be interesting. You might find a lot of firms don’t even estimate it.

Tobias: Yeah. So, you’re saying it’s sell side. Sell side is overestimating because they’re trying to get business on the other side.

Jake: Well, the individual companies, it’s happening at a micro level, where they are overpumping, to use Bill’s term, because they want to keep that relationship with management open and you don’t come in with a “This company sucks report,” right?

Jake: So, there’s just a systematic bias toward fluffing everything up to make it look better.

Bill: Yeah. And I was talking to somebody that was an ex-sell side guy. I actually liked the sell side quite a bit. But as far as the targets and the recommendations go, he was like, “That’s probably the fourth or fifth most important thing of the job.”

Bill: -management teams to like you. I think what he would argue is the body of the report is much more important than the outcome of the report. Your [crosstalk] Yeah.

Jake: Ain’t nobody got time to read all that.

Bill: Yeah. Well, I think that said he would say. It’s more important to do that work well and then to create a good relationship on behalf of your bank.

Jake: [laughs] You guys seen that just a little picture, like meme of when someone has something really long and it just says like, “I don’t have time to read this. I’m happy for you or I’m sorry that happened.”