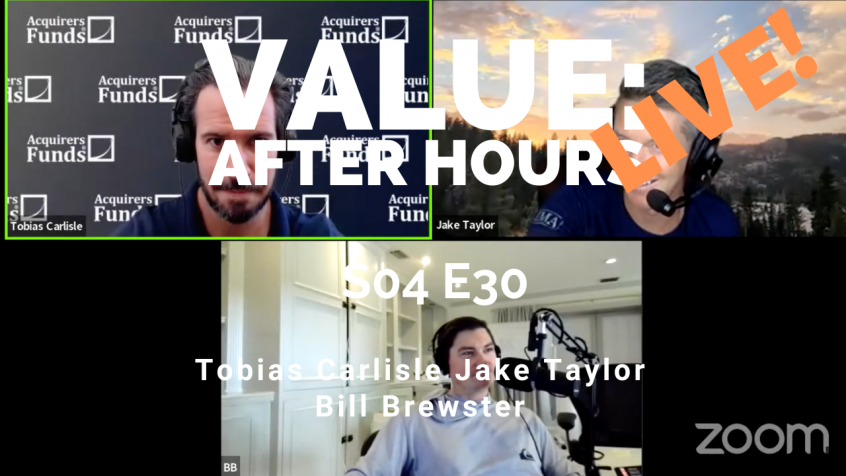 In their latest episode of the VALUE: After Hours Podcast, Brewster, Taylor, and Carlisle discuss Bull, Bear, And Benign Return Paths From Here. Here’s an excerpt from the episode:

Tobias: This is a market-level analysis from Man Group, Man Institute, I think is their research arm or something like that. They looked at the last four crashes. COVID, GFC, dotcom. A lot of us remember those. 1990, 1991, don’t remember that one. This is the earnings just going backwards in terms of earnings evidently fell over 21% in, COVID, 39% in the GFC, 13% in dotcom, and 7% in 1990, 1991. And the multiple compressed in COVID, two points. GFC was five points. Dotcom was 10 points and 1990, 1991 was 2 points. And so, they characterize the dotcom crash as a valuation crash rather than a fundamental crash. And GFC and COVID are both fundamental crashes.

They take that and they apply it to our current scenario, and they say, “If June 16th was the bottom, then you would characterize this one as a valuation crash,” which would make it like the dotcom crash. There was only a three-point multiple– Sorry, sorry, that’s not right. There’s a six-point multiple contraction, there was a three-point multiple expansion since the trough. And if EPS follows the historical attachment to the ISM, which it seems to do, that’ll be 21% earnings drop off, which they say means that earnings for the S&P 500 will be 190 by June next year. And I think we’re at like 210 now, down from 230 may be at the peak. And so, then we’ve got these four scenarios– [crosstalk]

Tobias: Well, if these are the four scenarios.

Tobias: Bull benign, and as JT points, should have been base and bear. The bull is, let’s see, you get 190 on 23 times, which was the cycle peak for the one that we’ve just gone through. And that means that market is up 6% by June 2023. And this article is a week or so old. So, it might be less than more than that, but roughly it’s about 6% by June next year.

Jake: Treasuries are back at zero in that scenario?

Tobias: Well, they have a little bit of color to what actually consists of what happens for the bull case for that to happen. They say, “Inflation moderates faster than expected. The central bank pivots. Return of secular stagnation. The Ukrainian situation calms. And the multiple returns to the cycle high 23, which was last seen 20 August.”

Jake: Wait, what was the upside on that?

Jake: 6% is the best we can hope for? Is that what they’re saying?

Tobias: [laughs] That’s the bull case. The benign case is you get to 21 times on the PE.

Tobias: And in that scenario, even inflation moderates, central bank pivots, Ukraine stabilizes to get to that. This is the average. That’s 19 times, that’s down 14% from here. And this is what happens. “Recession concern persists, and the playbook of prior recessions plays out. Average of multiple troughs four months prior to the forward earnings trough therefore assume trough multiple this time around as February 2023.”

So, coming. “Historical average multiple compression of five points to June trough. We were at minus six points. Therefore, assuming we revert back to June level, which is 16 times by February 2023. On average, the multiple rises three points in six months following the trough. Therefore, assume that February to June 2023, it rises from 16 to 19,” and this is the bear. You ready? [laughs]

Tobias: The bear is a 12 times multiple.

Tobias: And that’s the dotcom low, and that’s down 45% from here.

Jake: Buffett is shovelling money out the door like a madman.

Tobias: [laughs] I don’t know. I’m interested, whether that’s– It just seems to me like the risk reward is skewed the wrong way in a market in any case.

Jake: It does not seem like the asymmetry you’re looking for, is it–?

Tobias: No, even the benign case seems pretty optimistic. To me, the average is probably right, which is down about 14% from here.

Tobias: Do you think bonds survive? What are they doing? They’ve got a pivot in that instance?

Bill: Well, if you minimize your duration, they’re not going to move that much. It’s their contractual obligation to pay.

Bill: You might have a drawdown and I wouldn’t go out to 2040. But if you keep it in 2027 and earlier, I bet in five years, you could have [crosstalk]

Tobias: Is that your attraction to bonds? You think that the equities [crosstalk] from?

Bill: I’m just trying to get better management out of my cash.

Bill: And I have not been eager to buy and add additional exposure through this selloff, because I think this is a really confusing time. So, I’m just trying to get better yield and what I think will pay me back for my cash and not do anything stupid.