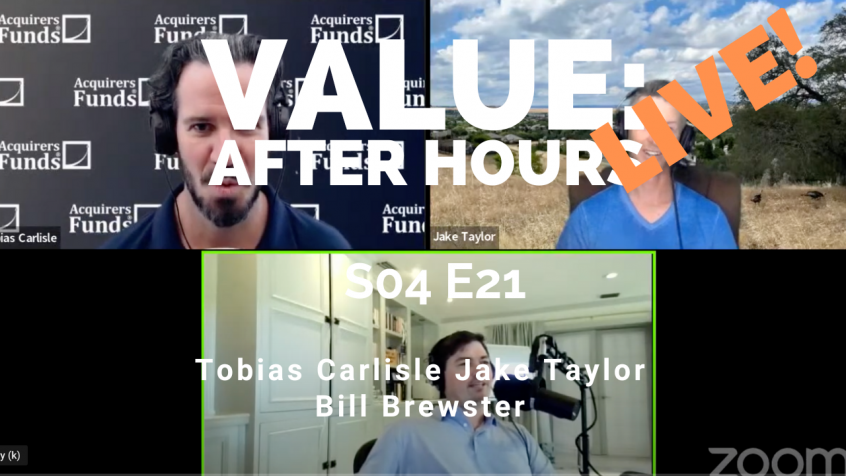 In their recent episode of the VALUE: After Hours Podcast, Brewster, Taylor, and Carlisle discussed The Best Investing Strategy Going Forward. Here’s an excerpt from the episode:

Tobias: Sorry man I’m going to bring you in here with me but. Oh wow! You wrote the article and then I fully understood what you were saying in that article, and I rewrote it, and broadcasted it. I’m just saying that in 2015, it was the worst opportunity set for value in 25 years. The reason was that the most overvalued stuff was squashed right down tight with the least overvalued stuff or the cheapest stuff. If I thought about the natural implication of what that meant, what that meant was that there were very, very high-quality companies trading for the same prices very low-quality companies.

In that instance, the best move was to go and buy a whole ton of the high-quality companies, even though there might have been optically more expensive than the cheap stuff that was worth paying up for. I think that anybody who had the foresight to do that had a spectacular 2015 to whatever 2021, something like that. I think the play now is a little bit different because the spread is so wide.

I think you want to be in the cheapest stuff because I think that this will be a period of time where it’s going to be multiple driven. You’re going to need to have a discount in order to get the return. The discount is going to drive the return for a little while. Anyway, that’s my prognostication. That’s really the only thing that I truly believe that is likely to work over the next decade.

Jake: Let’s say, tying in previous episodes where we talked about where do returns come from and that’s revenue growth, profit margin, dividend, and then multiple, and then share count.

Jake: You’re saying that it’s probably going to be more multiple driven and that will more likely be in values favor as opposed to quality. It’s going to be harder to maybe when on top line or profit margin.

Tobias: That’s what I think. Yeah, I think profit margin, very, very tough. Top line, hard to predict. The other ones like dividends are very–

Jake: Pretty steady for that. Yeah.

Tobias: They are pretty steady, but the yield on them is very low historically.

Jake: I think it’s a lot amount of cash coming out.

Jake: The price is high.

Tobias: Although, I think that the payouts have gone down over time. I think there was 60% [crosstalk]

Jake: That’s because you made [crosstalk] getting paid on EPS, not on dividend yield. So, break that share account instead of [crosstalk] return.

Tobias: Well, let’s be fair. I’d probably prefer to do that.

Jake: It depends on how expensive it is.