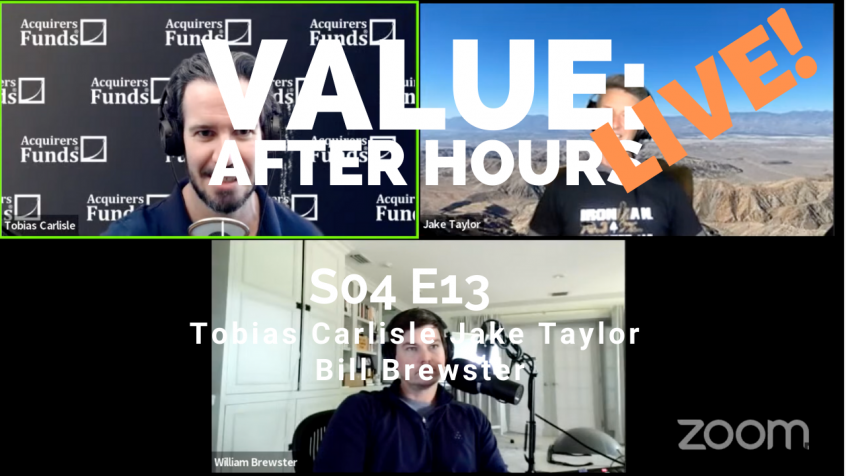 In their latest episode of the VALUE: After Hours Podcast, Taylor, Brewster, and Carlisle discuss Should We All Just Invest In SPY? Here’s an excerpt from the episode:

Bill: I don’t even know why– I was writing somebody today. I was like, “I honestly don’t know outside of motivated reasoning and the fact that–” I didn’t say this, but I came up with this. The other than the fact that my identity is as an active investor, I’ve been saying it for a while. I should just index.

Tobias: What if you just took what the top 10 names in SPY and then just made that your full portfolio? That’s a pretty good-looking portfolio.

Bill: I was always– [crosstalk]

Bill: I was like, “Once growth shits the bet.” Boy, the S&P, it’s really got to watch out. Turns out it just morphs and goes on about its business in a tax advantage manner.

Tobias: I do wonder how useful history is for some of the– This is one that Meb Faber has promoted a little bit that the biggest name has typically been the worst place to be, because it tends to be the thing that is, at the top of, it’s very long. It takes a lot of success to get there growth wise, I mean, fundamental wise, then you need overvaluation. So, it’s a bad place to be. When you look at the names that have been in there, it’s been the oil, Exxon-

Tobias: -has done a lot.

Jake: Probably, the most egregious would be Nortel Canada, when it was 40% of the index.

Tobias: Dotcom boom. But now, when you look at it, I think Apple is the biggest name in there at the moment. Then, there’s Microsoft, Google. They’re not egregious where they are.

Bill: I’m telling you, man, I’ve been saying for a while. I got two years and I’m just going to eat the tax liability that I have to, throw it in an index, and go do something else. Because she is a bad, bad beast.

Jake: Your golf games going to get off the chain, if you do that.

Bill: I just don’t know what I do. It’s honestly half of why I’ve not indexed. It’s not a very good reason. I don’t know. I’m going to have to fire myself soon. It’s sad.

Tobias: If someone presented you with– I don’t even know what the top 30. I couldn’t tell you what they are outside of the top five or 10. If someone shows you their portfolio and they’re just like– It’s like what Cathie Wood has done with NASDAQ. It is just to concentrate, like, just to take the biggest names in NASDAQ, just take the biggest names in SPY and say, “Yeah, that’s my portfolio.” People like, “Well, you really know what you’re doing? Is this a great portfolio?”

Bill: It worked for a while.

Tobias: For Cathie, I think it works in SPY. It would work now. Your portfolio look great then– [crosstalk]

Bill: I tell you. You call this. Michael Green, he was on Spaces in George Noble space and he was like, “You guys are too bearish. You just got to look at flows.” He’s like, “The flows are still coming in.”

Tobias: Yeah, that thesis hasn’t been killed, yet.

Bill: No. It’s not just that. It turns out, it’s not actually all that volatile, either.

Tobias: Because the flows are so consistent.

Bill: I don’t know. Growth guys look super smart and then they had a huge drawdown. Value, as a factor underperformed for a while and then it’s got this run, if you were in the– Ironically, I bet price to book at a really good six months after everybody said it was dead, because it’s probably commodity companies.

Jake: Almost, we’ve talked about that at some point on the show.