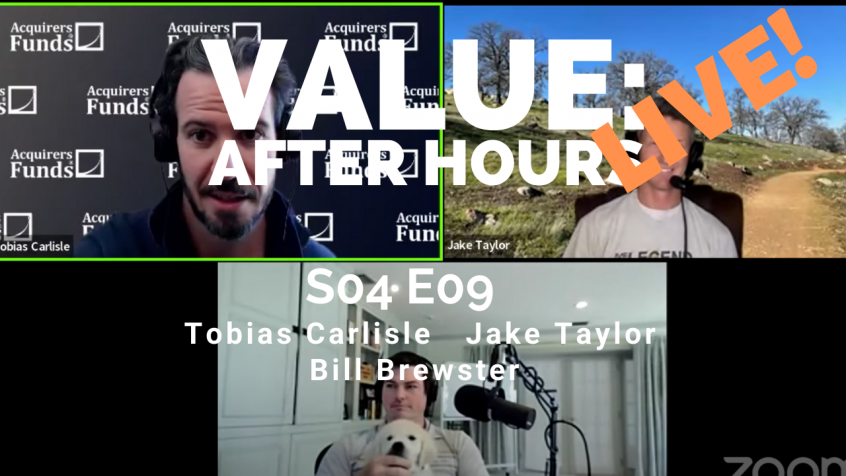 In their  latest episode of the VALUE: After Hours Podcast, Taylor, Brewster, and Carlisle discuss Where Do Returns Really Come From? Here’s an excerpt from the episode:

Jake: Okay. You guys know Bloomstran’s Semper Augustus letter’s always a bit of a massive lift. It’s 130 pages typically. But towards the beginning of it, he has a little section on basically, like, what has happened in the last 10 years. If you imagined the S&P 500 as a single conglomerate and looked at it as one big business, and “where do returns really come from?” That’s what we’re going to break down right now. You could go back to Benjamin Graham’s time period and look at return on equity impacting changes in book value, and then a multiple of book value plus a dividend will give you basically what your return could have been. But today, we use more earnings-based thing. You can do a little bit more decomposition than what Graham might have done.

Really, you’re looking at the change in earnings per share, which we can then decompose into the change in the sales and the change in the share count multiplied by the changes in the margins of the company times the multiple plus the dividend yield. We have this equation that holds true and will tell you exactly where returns came from within a business. It’s the fundamentals, how they’re changing, the multiple, which is the assessment, the sentiment about those earnings, and then a dividend yield. Sum it all up and you get where your returns came from and where they might come from in the future. Let’s run through what the last 10 years looked like.

Tobias: That’s one of the higher returns, I think, in the data.

Bill: You are coming off of a pretty low base.

Jake: Twice the rate of actual sales growth. Shares actually increased by 20% over that time period. I assumed just a bunch of IPOs towards the end of that time.

Tobias: Is that a negative number then for that–?

Jake: That’d be -2.3% attribution to your return from share count expansion. Margin expanded 48% giving you 4.2% attribution.

Tobias: it’s about the same, right? Just 46 that the other one.

Jake: Yep. It’s very close. Multiple expanded 96% total. Basically doubled multiple, which gives you a 7.2% attribution, which is a little bit more than 6.4 from this last decade. 3% dividend yield, sum that all up and you get 18.2% annualized for the 10 years of the 1990s. Then we could do that quick, like, cents on a dollar. 34 cents per dollar from sales increasing -12 cents, because of share count actually expanding, 23 cents for margin expansion, 40 cents again for multiple, and then 16 cents from dividend. So, it almost rhymes completely with that time period.

Okay, now, let’s put the connection of the time period in between, which was 12-31-99 to 12-31-09. The numbers don’t change a ton if you added two more years to get it to the 2011 time period, so that you connected the full sequence. By the way, I’m going to put the punch line at the beginning of this, which is that, you had a -9.1 cumulative return over that 10-year period, which is basically -1% annualized. So, how did you get there? Was it sales growth, sales problems? No. Sales grew 49%, which was a 4.8% attribution in the plus side.

Tobias: So, more than the last decade.

Jake: More than the last decade. Share count expanded a little bit over that time period and this is probably just dilution from money being raised in 2008 and 2009. You had basically 6% share account growth over that time period. Margins contracted 22%, which shaved off 2.8% return for you. Multiple contracted 31%, which shaved off another 4.3% and then you got your 2.1 dividend yield. Basically, sales were fine and better than even the last 10 years. Margins came in and multiples came in enough to where you had a last decade. All right.

Tobias: I wonder what the relationship of margins and multiples? I don’t think anybody’s devolved to that level before.

Jake: I don’t know. I haven’t seen that either, but they would appear to be very high, at least in these– [crosstalk]

Tobias: Yeah, in those three examples.

Bill: Yeah, I would think so.

Jake: Now, let’s sum all this up and look at it from 1999 to 2021 basically, so 22 years’ worth. You ended up with 136% total sales growth. That’s a 4%. Basically, GDP plus a little bit, share account is basically flat, the margins expanded by 67%, which gave you 2.4% total annualized return attribution. Multiple actually shrunk over that time period by 17%, so that shaved off basically 1% of your attribution.

Jake: And the dividend gave you 2% again every year.

Tobias: What that saying was 17% cheaper than we were in 1999. We’ll close to the very top in the biggest bubble ever.

Jake: Right. Especially, multiple wise, yes. Margins again are quite a bit higher. All told that gets you to 7.5% total return over that 22 years, which is what you would expect for equities. That’s a long run return. It just goes to show you beginning starting valuations, changes in margin and multiple really drive a lot of what’s your shorter-term experience is going to be, shorter meaning 10-year period. But once you get long enough that you can start to feel comfortable that enough of that stuff comes out in the wash, and you basically will get sales growth, and whatever share change, and the dividend over the years, and that’s probably where a lot of your returns will come if margins and multiples get washed out over the time period.

Tobias: So, margin saw close to all-time highs at the moment, right?

Jake: Yeah. I’m just going to give the contribution, the attribution of return for this. 18.3% attribution from sales growth from these five companies. 2.6% per year in share account reduction, which was mostly I think Apple and probably Microsoft. Margins actually came down some. So, you lost 1% to margin changes, which is surprising. I wouldn’t have thought that their margins would be lower in 2021 than they were in 2011.

Bill: Amazon does a lot to that.

Bill: Yeah, dude. They just continually reinvest. They’re not playing a margin game. So, I think that as they grow their sales, the blended average might come down.

Jake: Fair enough. That’s a good observation. I like that. Multiple expansion, you got 9.4% per year in that, and then a dividend, which basically is nothing half a percent, totaling you to 29.8% annualized over that 10-year period. It’s just monster.

Bill: Got to revert it to the mean, you’re only going to make 17 going forward.

Jake: [laughs] Well, let’s talk about going forward like what would the next 10 years look like? Because you have to get comfortable with all of these numbers if you’re going to make a projection as to what your next 10-year might look like. Let’s say sales and we can have conversations about debt levels, maybe–

Tobias: Is this FAANG or is this the index that you are discussing–?

Jake: No, let’s just go back to the full index.

2 Comments on “Where Do Returns Really Come From?”