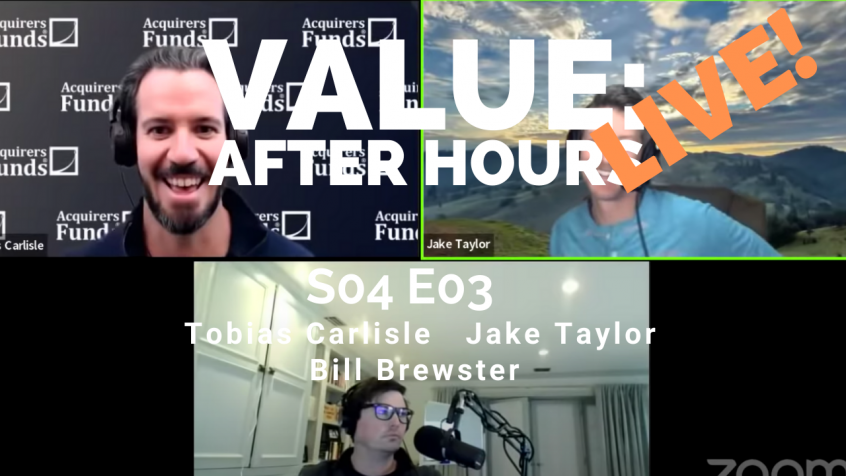 In their recent episode of the VALUE: After Hours Podcast, Taylor, Brewster, and Carlisle discuss Greenwald on Buffett’s Moats. Here’s an excerpt from the episode:

Tobias: Yeah, Greenwald. I’m always looking for a little hack for figuring out moats. I’ve never really seen a good one. I’ve never really seen one that’s particularly predictive but this is interesting. I think it’s promising and the intuition of it makes sense to me. That’s from Bruce Greenwald. He says, “You look at what amount of money you need to be sustainable in an industry. How big you have to grow to get sustainable, and then you look at how much of the market you have to capture to get to that level of sustainability.” So, he gives the example of cars and he says that a very, very big market. At 1% or 2%, you can be sustainable in cars and then he said–

Jake: Can I ask a question? That means how much revenue you would need to drive to cover fixed costs or something? What does he mean by that?

Tobias: He didn’t actually dive into that. But yeah, I would assume that’s the case. What you need to earn a reasonable return probably.

Tobias: So, he said, 1% or 2% is achievable in autos. Then the advantage to having autos is that, people buy, car is a one-off purchase decision about every seven to 10 years. So, there’s no habit, there’s no locking, there’s no loyalty. You might have some– If you have a particularly good car, but you probably are just looking for something new and so you open to different types of vehicles. Then he compares that with the soda Coke, and he says to become sustainable in whatever that’s called non-alcoholic beverages or something like that you need 25% of the market, which seems extraordinarily high, but let’s just take his number for the moment because distribution is so hard to achieve. You need scale to get distribution.

It’s such a small purchase item that it is habit forming. So, people have a preferred brand that they buy repeatedly over and over and over again. It’s very hard to get them to switch. So, there’s a much bigger moat in that segment than there is in [unintelligible [00:36:43]. So, therefore, that’s how he’s measuring the moat, which I thought it was a really just simple elegant way of making that assessment. It wasn’t particularly intuitive to me that that would be the way that you do it but having read it I thought it’s a good approach.

Bill: Where do you write this? I’ve heard him say it before but I didn’t–

Bill: Yeah. [crosstalk] He said it in his Columbia class. There’s a three-day class that he said–

Tobias: Yeah, Johnny grabbed it and threw it up on the site. I just thought it was a good one.

Jake: It’s interesting, though, because how it– You run a profit pool at the end of the day as well. So, competition derives a lot of what profit pool is going to be available there. I don’t know, how do you factor that part in because that’s just total revenue percentage of market share. But that doesn’t necessarily like, it’s a really fractured market, there’s lots of people competing, your price taker still, I don’t know. How much profits left over there? Because isn’t that what a moat really is, is the deep profit pool for you?

Tobias: Yeah. What does it mean to have a moat that you can control your pricing? Yeah, can you do that with autos? I don’t know. Maybe that’s not what it means. Maybe just being able to survive in the industry.

Bill: Yeah. I think that’s what he’s referring to. Because I think he’s talking about measuring the– I think in his Coke example, he’s assuming there’s profits for Coke and he’s trying to calculate– I almost think of it a little bit like Mauboussin’s idea of a competitive advantage period. Like, how long can this be chipped away at before your economics go away?

Bill: Yeah, but you’re not going to buy anything else.

Tobias: No. Why would you do that? It’s crazy.

Bill: I have a squeaky door. It needs WD40. That’s what it needs. Somebody could have squeaky door stuff right next to WD40. There’s no way I’m buying it.

Tobias: Yes. squeaky door, especially, you’d have to flavor it or something like that.

Bill: Yeah. I like this. I like that stuff that I think Greenwald’s generally a smart dude. He should have stayed away from Amazon. He would have had a lot better career but he knows that [crosstalk].

Tobias: He was short it, wasn’t he?

Bill: Yeah, for a long time. I think I’m pretty sure he’s announced publicly. It cost him eight figures.

Tobias: Wow. I see someone saying today that there’s an article about Tobi Lutke at Shopify saying that this will be the first year that Amazon’s revenues don’t grow or revenues go backwards. I guess, they got a tough comp from– I’m not actually sure if it’s 2021 or 2020 but they’ve been some tough comps that I thought that was interesting.

Tobias: Are things that are going to happen this year?

Bill: Of things, I have to deconstruct to figure out. It would make sense. You got 2020, literally, everyone was locked inside. That’s the perfect retail environment for Amazon.

Tobias: Yeah, it does make sense. Yeah. Is this more applicable to very capital-intensive businesses? What about companies have a specific market share and it is capital intensive, but the switching costs are low?

Bill: I don’t think capital intensity is the thing to think about because he uses Coke, which is not particularly capital intensive. Potentially, something that relies on distribution but I don’t know. I think you could use it on Google. There’s a website out there that shows you all of the market share data in different markets. You could track that over time on Google and see, is somebody actually coming into Google’s moat? For some reason, French people use Bing for a little while in 2020. It lasted for a month and then I went away but yuck.

Bill: You guys want to have worse information, go ahead.

Tobias: [laughs] It is as distressing as it might be that Google tampering with the results over time. Anytime you go and try and use anything else it’s just complete gobbledygook.