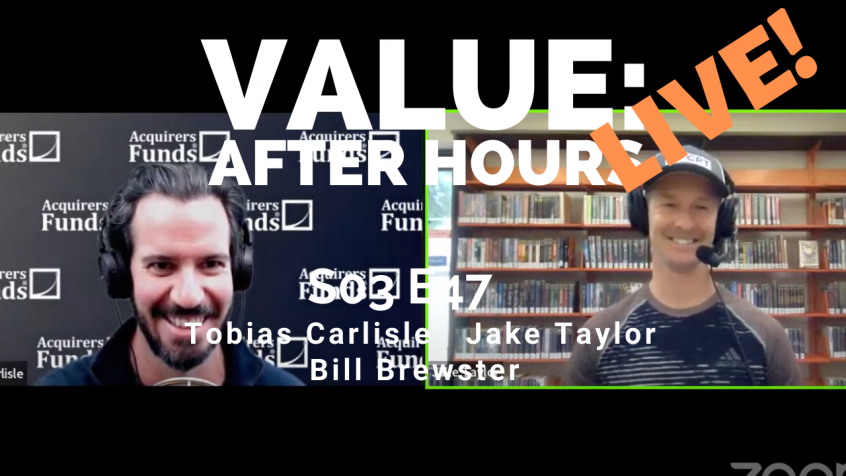 In their recent episode of the VALUE: After Hours Podcast, Taylor, Brewster, and Carlisle discuss This Is How A Laser Works. Here’s an excerpt from the episode:

Jake: Yeah, so, this may be, I’ve tried to learn this multiple times in my life. And it’s like really hard to– [crosstalk] Yes, it just comes in one ear, and it stays there for a minute, and then, it just exits, and then, I can’t explain it again. But I read an analogy from Steven Strogatz, who’s a math professor. I like his writing a lot. He has a lot of really good science that he– He’s a pretty good storyteller. So, he has this analogy that I’ll share with you that maybe will help you understand it.

The idea behind a laser is that, it’s trillions of atoms that are emitting these light waves, they’re like perfectly in sync. So, it’s called a Light Amplification by Stimulated Emission of Radiation. So, that’s what L-A-S-E-R is an acronym for. So, here’s the analogy that Strogatz uses. Picture that you go and you are finding yourself on an alien planet, and in front of you curiously enough is a watermelon and a stepstool. You take the watermelon, and you set it on the stepstool, and you observe it, and it starts like gyrating and pulsating, and then, it falls off the stepstool. As it falls off, it shoots a seed out. You’re like, “Huh, that’s weird, okay.” Then, you keep walking along, and then you see millions of watermelons and millions of stepstools, and you’re watching them, and you go around, and you start putting them up on top of the stepstools like providing some activation energy to this.

The strange thing is that when one of the seeds shoots out of one of the watermelons, if it hits one of the watermelons that’s already on the stool, it basically passes straight through it and it duplicates itself, and you have two of these seeds flying, and they’re like perfectly in sync with each other. So, you can imagine that the watermelons want to get back to their ground state is what it’s called like that’s where they’re sort of the happiest.

But if you do something to agitate them, if you pry enough energy to get them up onto the stool, they will emit something which ends up being like a light wave. This is how everything works actually. So, if you picture a toaster, and the reason why it’s red when it heats up is because the electron passing through that wire, and the heat created is boosting up the metal inside of there, just like that activation, and then a red photon is shooting off of there and into your eyeball, and that’s why you see red light coming out of your toaster.

Every time it gives up its excess energy to get back to the ground state, it emits a photon. So, how a laser works is, you basically picture like elevating a bunch of these watermelons effectively inside of there, and then, they’re shooting off and hitting other watermelons, then the seeds come out, but the problem is, they’re going in all kinds of random directions and stuff. What the laser does is, it has like a cavity, almost picture like a sound, like a pipe for– like an organ, how it would like capture the sound and get it all lined up and directing it. This is effectively what the cavity of the laser does.

Then, it’s basically like a bunch of mirrors inside of it that it kind of like gets it all going, and then one of the mirrors is slightly imperfect, so that some of that gets released, and that’s what a laser is shooting out of there. So, they’re all the same color, and phase, and direction, like all perfectly synced up. That’s what allows them to– It’s almost like an echo chamber inside of there. So, what’s amazing about this then is, think about like a surgical laser. You would normally have a scalpel, which has a certain thickness but, because you can get it down to this tiny amount of electrons or photons basically, you can make it so, so, so small that you can be so accurate with it and it also cauterizes at the same time. So, it’s super cool.

Well, and of course, there’s all these different applications for it, CD players, laser printers, barcode scanners, fiberoptics, photolithography, which is like one way of making chips for computers, cutting and welding, speed traps, your golf rangefinder, all this stuff is using lasers in cool ways. So, let’s rewind a little bit and back out of this. By the way, so, the printing press like 1440s, and then, it’s like 170 years until we kind of get to the next cool thing, which is the telescope 1610. Another 90 years to get to the next cool thing like a steam engine.

Then 60 more years to get to the telegraph. And then, another 40 years to get to lightbulbs, and telephones is another 40 years. And then, cars is another 20 years after that. So, things start to speed up. We’re getting more and more stuff. As we get radios, airplanes, the 1950s had Sputnik. We had, the 1970s we get microprocessors, and then digital cell phones in the 90s, and the internet, and the International Space Station. 2000s, we get the human genome project, the iPhone, the Large Hadron Collider, and then the last 10 years, we get like CRISPR and 3D printing, and then maybe crypto.

Jake: Here’s something interesting about lasers is that, Einstein posited that lasers were a thing that could happen all the way back in 1917 and it wasn’t until 1960 that we had the first working laser. So, and in 1969, there was the first retinal detachment surgery that used laser with an argon laser. So, all of which is to say like, 52 years between when it was first conceived, and then an actual working example of something useful?

Well, I know that I just went through and showed all those things that are getting, like– that we’re speeding up technology. But I have to wonder if, it took almost a whole century or half a century to get lasers being useful. I cannot wonder about crypto in that way of like, “Yeah, it’s like, there’s some cool stuff, but maybe it’s going to be quite a while until we have anything that’s actually, truly useful in a way that like really changes the world.”

All of which is to say to go back to what Bill was talking about and having long timeline, it’s like, you may need to be in this for a long time before you ever really get to that magical place where this changes the world like you think it does. And I would just say that, the patience may be extremely required in this situation because everything has taken quite a long time and I think we have to give ourselves a little bit more expectations of how long technologies take to go from the idea to the actual useful application of it.

Tobias: Have you seen the Bitcoin price? So, it’s up a lot.

Tobias: So is Ethereum. I don’t know I like the idea of the decentralized internet Web 3.0, that looks cool. Yeah, but to your point that might be 52 years away.

Jake: It’s not going to be probably 52 years, but even if it was 10 years is like, “Are people really willing to be stuck in this grasping, looking for an application that really changes the world place for 10 years? You really like have that time horizon?” I really hope you do because that may be what’s required of you.

Tobias: Well, we’ll see as long as the price keeps on going up, I’m sure– [crosstalk]

Jake: As long as the price keeps going down, yeah, then, that’s fine.