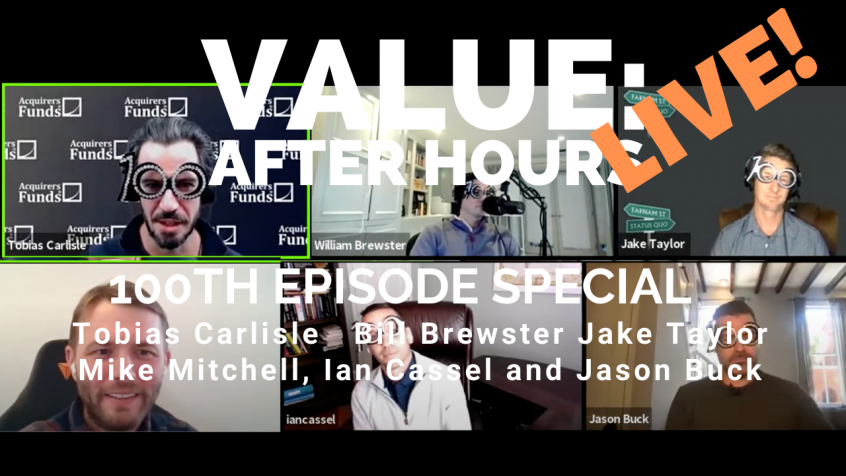 In their recent 100th episode of the VALUE: After Hours Podcast, Taylor, Brewster, Carlisle, and friends discuss Shoot First, Ask Questions Later On Buy Decisions. Here’s an excerpt from the podcast:

Ian: One of the things I was I was journaling about– I was thinking about coming on today, I journal every once in a while, and then usually what happens is I try to boil down what I’m thinking or journaling down into a tweet, and that’s what you see online.

One of the things I was thinking about or journaling about last two or three weeks, it’s just related to micro-cap, unlike probably any other area in public market investing, the discovery of a company is probably the most pronounced. The importance of finding a company early is most pronounced because one or two investors find an idea before you can literally move that stock 10%, 20%, 50% 100%. So, discovery really does matter a lot more down here in the small stuff than it does in small, micro, mid, or large cap.

It’s important to be decisive. Speed matters. I’m a big fan of quick no’s. When it comes to investing, I think most people in here would agree with that. I’m a big fan of a quick no, but I’m also a fan of a quick yes. I think the best buys are always, at least for me, have been ones that were quick yeses, and the other ones that kind of checkmark all those big boxes that you look for, a type of company, a management team situation, and maybe the business connects with what you’re going through or what you like as well for whatever reason.

Jake: Does that mean that you fill up a full position size relatively quickly then as well?

Ian: No, not at all. We actually had one of these situations recently about three weeks ago. We were looking at it and certain event triggered us to look at the idea. We started looking at it on a Thursday. We dove into it hard Friday, Saturday, Sunday, bought a smaller position on Monday, and we continued doing our diligence and as you continue to dive in, you add to it. I think the interesting thing, when you think about it is the companies that you like the most are the ones that you like more, the more you dig into them. Those are the rare ones because quite honestly, if we’re all being honest with ourselves, the more you dig into most things, the less you like them.

Usually, it looks like the acting quickly to take on an initial position that checkmarks those first 10 big boxes that I have, and there might be 20 other boxes that need checked along the way. But as long as I can get to those first 10 being checked, it’s reason enough to take on a position. Actually, I want to go back and read some of my journals from what I was personally in the past, and it kind of goes back to what you’re working on with Journalytic, Jake. It’s kind of going back to those previous decisions you’ve made, looking at what things you check there, and how did they perform, whether you bought them or you didn’t buy them. When they checkmark the big things, at least for me when I look back, I probably had a 70% batting average. So, that’s enough for me to at least get my feet wet in a position. I think it makes a lot of sense, especially in microcap where discovery is important to–

In some ways, shoot first, ask questions a little bit later when it does check those things. I think it also gets harder, more institutionally minded you become to act quickly, because obviously, it’s a lot more cerebral to say, “You stuck to your process and did due diligence. You stuck to your 86-point checklist and talk to management, suppliers, employees, went on top of a mountain and meditated for three weeks without your device before you became– got to a buy decision.”

Ian: Yeah, exactly. So, that sound smarter. But a lot of times I look back at the past, it’s those ones where I was able to get to a buy decision quick, and really dove in, and liked it more and more, and continued to average into a position whether that was average down or up, those are the ones that I think about when we you know. Hopefully, this will be one that we just took a position here recently but that was a real-world example of one that we just kind of acted on quick.

Jake: It’d be really interesting to see if your batting average improves as you got deeper into your checklist or whether that actually added materially or not.

Ian: Yeah, not everything– we had to have these types of situations in the last 12 months where we layered into a very small position, and then layered back out of it because there was something that either evolved in a way we didn’t like or something just happened.

Tobias: The first few– Sorry, dude. I was just going to say the first few points are why you want to own it, and then you spend the rest of them like trying to kill the idea. You always find the first five points, “This is why I want to own it, and then the next whatever it is, the 81 points after that are all the ways that you’ve been sunk in the past that you’ve got to go through and try to kill it.

Tobias: You just feel like you’ve donated enough money to a sector and don’t want to do anymore donations.

Tobias: Enough charitable giving in oil fill drillers for me.

Jake: It’d be fascinating to see some kind of return weighted against a checklist dollar-weighted return. So, I deployed this much capital at this amount of checklist items and then I did another tranche of capital at a different number of checklists, or even batches of checklists, and how those then correlated with the actual outcome would be pretty cool– [crosstalk]

Tobias: There is something [crosstalk] like existential metaphysical risk, like you really almost never going to see it even in your entire investing life. It’s just that when they come up, it’s just a donut– [crosstalk]

Jake: Let me put a big asterisk that the end needs to be large enough to be significant there because there will be tail events that are hard to predict.

Ian: It’s really interesting because what I just think about, I’ve been doing this for 20 years, but so much time is spent rationalizing into good ideas instead of great ones. It’s funny when you see a great one come across the plate, and you’re like, “Oh, wow, that’s what a great one looks like.”

Bill: That is very intelligent, Ian. I like that.

Tobias: That’s the difference between Buffett and everybody else, that he just sits there waiting for the great ideas, and somehow, he’s figured out not to swing at the good ones.