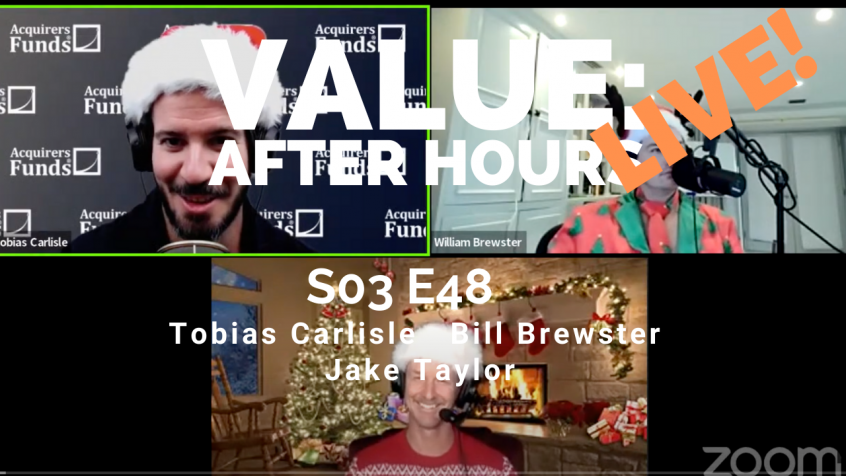 In their recent episode of the VALUE: After Hours Podcast, Taylor, Brewster, and Carlisle discuss Elon Musk – 2017 Time Magazine Prediction. Here’s an excerpt from the episode:

Tobias: Speaking of cults, so, I saw this tweet this morning. It’s from April 2017 from a gentleman by the name of Jawad S. Mian. “Pretty good call here. We believe Tesla is the quintessential American brand and Elon Musk embodies the cult of personality that investors are attracted to in the final stages of the bull market. The Tesla bears club will only grow more frustrated, despite their arguably irrational arguments. Sell Tesla only when Elon Musk is crowned as Time Magazine’s Person of the Year.” 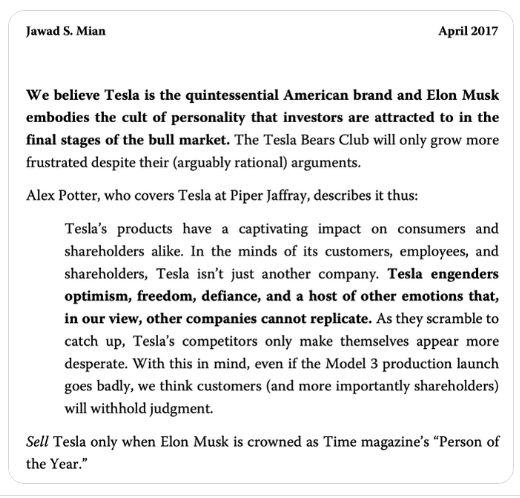 Tobias: Yeah, I tweeted it out. It’s on my stream.

Bill: Get that man some money.

Tobias: I agree. He foresaw it. He knew exactly what was going to happen but you know, pay that man, his money.

Bill: Yeah, that’s right. I hope you had calls, the whole way up.

Jake: I thought I saw Bezos on a time cover, it looked like he was still relatively young. So, it must have been kind of post dotcom blow up, but pre-Amazon full dominance.

Tobias: Someone responded with the Zuck Time magazine cover, and they know that was years ago. So, Zuck’s Facebook’s run a mile since then. But the thesis is a little bit different for Tesla because he said, there’s some other discussion around it. His argument was basically, it is meme stock, and he’s anti-establishment is the idea. I cut out some of the quote for brevity. But the idea is that he needed anti-establishment.

Bill: Oh, he needed [crosstalk] of the year, and then, he becomes the establishment then the meme drops.

Tobias: His establishment is the meme. Right.

Bill: I don’t know. I think he can overcome that. Interesting parts of Tesla, if you open up their 10k, you will see what their marketing is immaterial.

Tobias: Yeah. We’ll do the marketing for them.

Tobias: The drivers did the marketing- [crosstalk].

Bill: Yeah, I got to tell you something.

Bill: Well, that’s why, I mean, he’s very adaptive at the game he plays. He’s very, very smart with it.

Tobias: I guess, the point that they’re making wasn’t really that, he can continue to be anti-establishment. It’s just that it’s not kind of reached saturation where everybody’s going to know who you are for you to appear on Time magazine cover and there’s a lot of Tesla’s up where I live.

Tobias: Somebody put together all of his conflicts for the SEC. It’s an impressive rap sheet, I got to say.

Bill: Yeah. I think that, that keeps his brand anti-establishment more than the amount of people that know him.

Bill: Yeah. I enjoy talking to Jen Ross about him because she’s really upset with the way that he’s treated his responsibilities in Tesla, and I think, the SEC and investors in general. But then on the other hand, she has a deep appreciation for what he’s done for the space program. As somebody that works in the space industry, it’s kind of fun to talk to her about those tensions. So, yeah, he’s a complicated character. I think a lot of what he does publicly, obviously, is for perception. I think, he plays game very well.