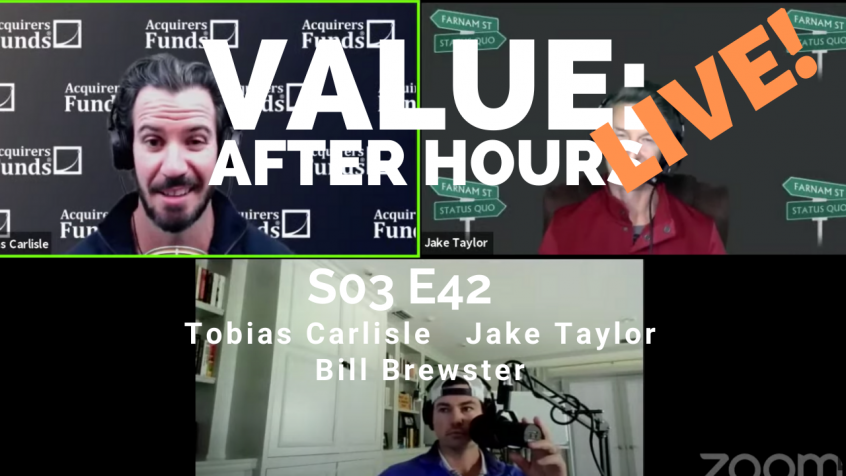 In this recent episode of the VALUE: After Hours Podcast, Jake Taylor, Bill Brewster, and Tobias Carlisle discuss Bessembinder’s Lessons For Finding Outliers. Here’s an excerpt from the episode:

Bill: Hey, real quick. This is from the lessons from Bessembinder that Baillie Gifford had. So, the four big ones that you want to look for is strong crash accumulation, rapid organic growth, larger draw downs in the prior decade, I think, it’s kind of interesting. Then higher R&D spending. I assume that’s relative to peers. But that’s what you’re looking for on average, if you want to pick the outliers.

Jake: These would be the 4% or whatever the Bessembinder identifies as carrying the entire weight of the indexes returns, right?

Jake: These are the four hallmarks of those 4%.

Bill: Yeah, I think they came up with 22 things, but those are the big four.

Bill: I sometimes wonder if strong cash accumulation like, they don’t offset that with share base comp. So, I wonder how they would adjust for that or if they would.

Tobias: I wondered about that research a little bit how backwards looking that is like, if you look at the current winners in the market, and you know, one of them is strong cash accumulation, and the other of the big four was like an extra or large volatility in the preceding decade.

Bill: Yeah, not exactly the case of a lot of these, yet.

Tobias: But that was true, I mean, it was true of Google, or Amazon, or Apple.

Bill: Oh, yeah. But I’m just saying like, I’m going to use the wrong stock, but like Zoom, I don’t know that Zoom’s had– I know, it’s drawn down 50% now, but that was in the prior decade, and these drawdowns that they cite are really big. I don’t even know that 50% would count.

Jake: What does that draw down like why it would be– [crosstalk]

Jake: What’s the causal mechanism for why a big drawdown in the decade before would have any reason for us to say like, “Well, yeah, that’s going to be a mega winner.”

Bill: I wonder if it’s a little bit like the NFT thing that we were talking about before, where it’s like a technology that people think could be really, really big, but then it gets punched in the face with some reality, and then people puke it, but then the thing that the first people actually saw starts to materialize. I have no idea that it’s true.

Tobias: Is it the hype cycle? Is it the Gartner Hype Cycle.

Tobias: It’s get ahead of itself and– [crosstalk]

Jake: But there’s like and euphoric phase, and then, usually a washout, and then an installation phase when like, “Oh, this actually does something valuable.” It becomes the norm, and then it becomes boring.

Bill: Yeah, I think we’re in the euphoria phase in a lot of NFT projects. I agree with you that the trading is probably closer to gambling than anyone actually valuing it. But I do think there’s something there, there.

Tobias: I do, too. I can’t separate it out from the– I think the technology is interesting. I’ve seen people using it for conferences and things like that buy your NFT now you have that access to a conference. So, it’s like a ticket like that makes sense. There’s clearly there–

Jake: Why does that have to be on a distributed ledger?

Tobias: But what if it’s a rock concert and there’s like you don’t want the scalpers getting the tickets and then reselling them to somebody else?” So, you just like, you’ve got to be the person who bought the ticket directly. Maybe they get rids of the [crosstalk]

Jake: Yes, on that. Can that just live on ticket masters in journal– [crosstalk]

Bill: Don’t be such an older man.

Tobias: Don’t be such an old man.

Jake: It doesn’t need to be.

Bill: What if you go into your VR world, and you want to go into the Bored Ape Yacht Club, but in order to enter that club, and it’s like this virtual world that they’ve built out that’s like super kick ass because they’ve been working on it for a while. But in order to get there, you got to own an avatar. That may not matter to many people, but people pay tons of money to get into a real golf course. So, I don’t know. Is this definitely going to be that much different? I don’t think so. But it’s a long ways off that I will agree with.

Jake: That’s a pretty big bet to be making today that there will be this future like ended that picture of a 12-bit picture of a monkey. It’s going to be the golden ticket to-

Jake: -[laughs] to the world that that you want to enter.

Bill: I agree. I just happen to think that those monkey tickets may be evidence of one of the first online communities that believed in this stuff. I know they weren’t the first. I know they were like crypto kitties before that and stuff, but I think what the apes are doing is different.