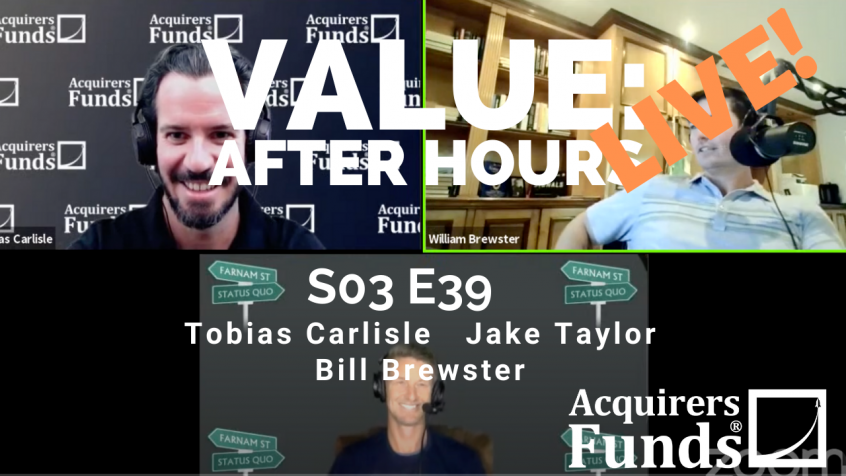 In their recent episode of the VALUE: After Hours Podcast, Jake Taylor, Bill Brewster, and Tobias Carlisle discussed the Gamification Of Digital Advertising. Here’s an excerpt from the episode:

Bill: Well, I think Facebook is a good example of something that is not an old-world company. But Facebook to me feels like the new nicotine. All the potential regulations and stuff– I don’t know. If people want to put the responsibility of policing those platforms to Facebook, then I have a high degree of confidence that no one will ever be able to build another social media site.

Jake: What do you think about these reports though that you see pop up periodically, where they talk about how gamed the whole programmatic advertising world is and that it might be all a bunch of bullshit? At least the cigarette, the user who buys it feels some benefit from it, even if there’s a long-term cost. But if you’re an advertiser, which is their real customer, it’s not you, the user, right? But if they can’t prove or at least [crosstalk]

Jake: Yeah, if it starts to become proven that there’s not getting that traction that they are expecting from all these ad dollars, then that’s a real problem, isn’t it?

Bill: Yeah, but I forget what the citation was last week when Facebook’s apps went down, one guy said, e-commerce sales declined. Here’s the thing. I don’t think it would be hard to prove to me that targeted advertisements on Facebook and YouTube are not better than television. A lot of people, if you ask them about their experience on Instagram, they enjoy the ads. That’s a common thing that people say. I have found the ads highly relevant. Twitter is less so. So, I don’t know. I’m not sure what the better alternative is. Even if some of these numbers are not perfect, I still think they’re probably directionally closer to accurate than not.

Tobias: So, they’ve got an idea about the clicks. The issue with the news media company that’s just had this stumble, that startup, I’m just blanking on the name again at the moment, but they’ve been using that really junk traffic apparently [crosstalk]

Bill: I got to go to Australia.

Tobias: I think, it’s O-Z-Y summit, one of those, that though we’re using this traffic thing, which pulled up a hidden page in a browser and so that then Canada’s a click. Advertisers don’t like that evidently.

Bill: No, that ain’t right.

Jake: Well, it’s like click farms, and fake followers, and all kinds of this machinery behind it to make it look as if you are actually reaching a customer, but you’re not.

Tobias: You would think that Facebook could show pretty easily– They’ve each profile, and you’ve got to have an idea whether their profile is real and not, haven’t they?

Tobias: I mean, it’s to their advantage.

Bill: Yeah, I don’t know. I still think it’s better than the alternative. But I do agree, it’s probably not as good. Their stats probably overinflate how good they are at advertising.

Jake: When you hear stories about big companies totally slashing their social budgets and seeing no change in revenue, that’s not a good sign, right? You take $300 million out of your social budget and there’s no noticeable change.

Bill: Yeah, I don’t know, man. Sometimes, I wonder how often those headlines are real and how often it’s like they’re coming out in the middle of some social scandal, and CEOs feel a need to pontificate about any issue that’s political now. So, they make a statement and then they backtrack it, and nobody actually goes back and says, “Hey, did they follow through on this?” Because nobody cares anymore, because the news cycle changed.

Tobias: There’s also the– everybody’s getting more sophisticated at marketing through those channels. So, it’s much more competitive than it used to be. Everything, the keywords get bid up to very expensive levels, because now people get an idea how much money they can make. So, the customer acquisition costs, they’ve got a better idea what they can afford. They spend more money, they A/B test it, so it’s just razor sharp, and then they’re spending lots of money, but then so is everybody else. Everybody’s standing on their tippy toes at the parade. “Now, we’re spending so much money, and we’re really, really good at this, and the return is lower than it used to be. Must be fake clicks.”

Bill: But they [crosstalk] fake clicks. Except for YouTube. YouTube’s the best. Please monetize us.