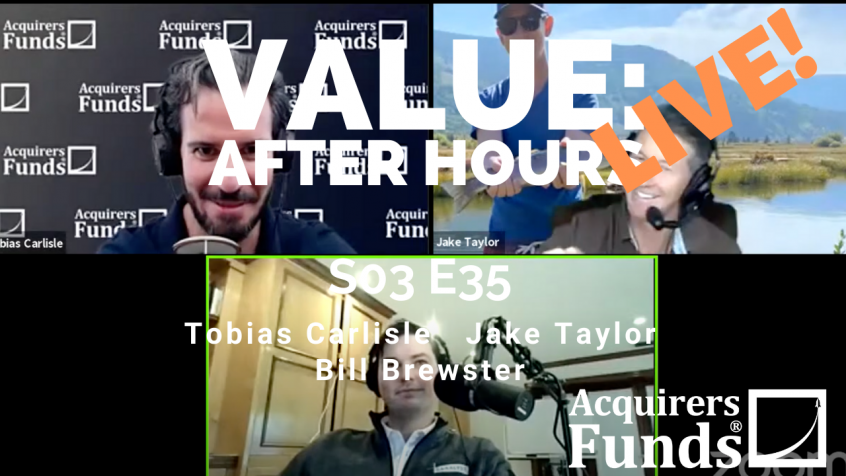 In their recent episode of the VALUE: After Hours Podcast, Jake Taylor, Bill Brewster, and Tobias Carlisle discussed Is Groupthink Impacting Your Results? Here’s an excerpt from the episode:

Bill: You’re a very thoughtful man, Jake. I guess this is what I’ve been thinking about. I’m going to put it together right in front of everybody. So, I found an interesting study or anecdote in Think Twice where they were doing a very simple experiment. It’s five lines, and your job is to match the length of the line that you’re looking at with the length of the line on paper.

Bill: Okay, cool. You know all the big words, man. I’m just teaching it like I would a five-year-old. Anyway, Jake.

Bill: Most people can do it., I don’t know, maybe 99 out of 100 times, one time you’re drunk, whatever. We add that one back, adjusted accuracy. But when you’re in a group of people, so the study was there’s like seven people and six people pick before the person that’s picking, the person very rarely got the correct answer. I think about that sometimes– I’ve actually thought about this a lot over the past year and a half or something where I actually know what people are talking about, but then the chatter around the thing that they’re talking about is so wrong, and the take is so wrong, but people are confident in a wrong take, and I think that some of that has to do with– I do think there’s something real about watching the first thing that goes into your brain, and whether or not you’re actually protecting against that, and forcing yourself to think for yourself.

I guess that as it currently relates to my situation, I have just read so much never sell shit that I don’t think that, I need to go back to first principles a little bit on this whole never sell stuff, because I get it, and I really do get it, and I know that I just said I got it, but I also think that maybe it’s gone too far. I think part of why it’s gone too far, maybe of the echo chamber that I’m in. I also tweeted out something today. Let’s see if I can find it. But the gist of it is groups of people can get themselves to conclusions that are wildly, wildly wrong. When you separate partisan groups and you let them discuss an issue, they get further and further more drift into their partisan nature.

Bill: Sure. We’ll call it that for here.

Tobias: But that’s where the idea of groupthink comes from. Oh, that was just they didn’t have any– There was nobody who was pushing back and saying this is a bad idea. Everybody was just in the room saying this is a good idea. Even though each individual might have had reservations about it, because of the social proof, they didn’t feel like they could express those reservations in that. So, it sounded like everybody was reinforcing what everybody thought was a bad idea that everybody’s reinforcing in a positive way. You may not even think it’s a bad idea. You may not even be able to think about your own feelings about it because you’re in a group and even if you think about the way that you view the problem, you think, “Yeah, this is the right path” when you walk away from the group and you start thinking about it for yourself, you start “I don’t know. This is a problem. We’re going in the wrong direction here.”

Bill: Yeah, and I think the combination of– I’m just going to roll through every chapter. But the interesting thing is, when it comes to politics and I really do think investing is this way, especially, when you get into value growth camps and shit like that. When you start to have conversations and echo chambers, the thought can get taken way too far. And then, the other example is, in politics, at least, the people within a party can’t see the hypocrisy within their own party. When you’re talking about the value growth spread, I think a lot of people unless they’re really consciously thinking about it, whether they’re in the value camp and they dismiss growth, or if they’re in the growth camp and they dismiss value, I think this stuff takes a lot of brain power to really work through, and I think that you should probably be pretty tired at the end of every day, because you’ve thought. That’s where I’ve got [crosstalk] Yeah, there you go, or you’re on thin ice.

Bill: See? See what I did there? You told me, for those that are watching, thin ice. So, anyway, I don’t know. Those are just some of my thoughts, and I don’t know. That’s what I got.

Jake: I think you’re spot on, and there are, I think, all kinds of–

Bill: This is the happiest day ever. Jake and I agree.

Bill: I think people think we don’t agree a lot. You listen to us– [crosstalk]

Tobias: [crosstalk] 99% of the time. Want to sit around the edges.

Tobias: There’s no fun if everybody’s sitting around here agreeing.

Bill: This is true. Sorry, Jake. Please continue telling me how correct I am.

Jake: Yeah. The working in teams thing is really a double-edged sword, where you have that order of information as it’s presented to you, and as you get feedback from others, while that feedback is gigantic to create that outside view and helps you to entertain more possibilities, because there’s just less blind spots when you have multiple people looking at something different perspectives, the biasing, the noise that it can introduce is also tremendous. So, you have to be really thoughtful about how you orchestrate group projects when it comes to decision making.