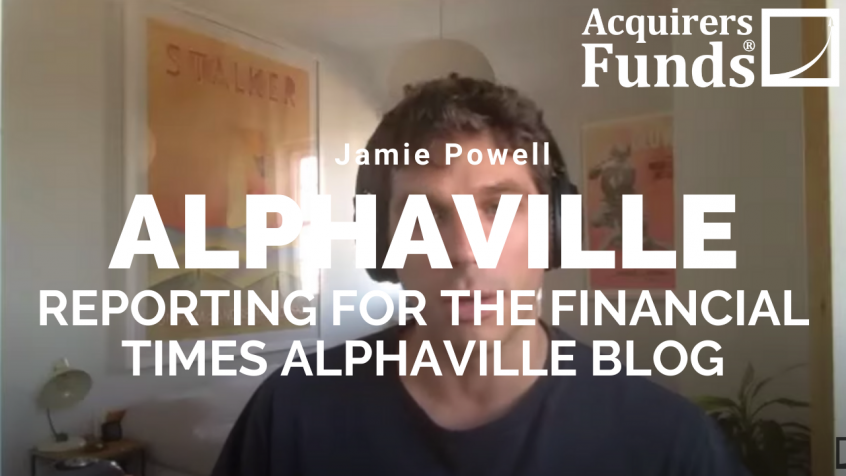 During his recent interview on The Acquirers Podcast with Tobias, Jamie Powell, reporter at FT Alphaville discussed Wirecard – Exposing The Biggest Financial Fraud Case Since Enron. Here’s an excerpt from the interview:

Tobias: What about when you come across something like a Wirecard, doesn’t have to be Wirecard, particularly, but something like Wirecard where you really do think that you’ve got potentially something very, very big? How does that process work out, where there’s a group of people over an extended period of time?

Jamie: Well, I think with Wirecard, all good journalists are talking to investors. I talk to people like you, people on the long side, value guys– [crosstalk]

Tobias: Why don’t we just back up a bit for people who aren’t familiar with Wirecard is? Let’s start there. Just explain the story.

Jamie: Wirecard was a German payments company that was to a €25 billion market cap. It was the darling of Europe’s tech scene… payments company. There was always reputation around it for being a bit dodgy, like a very high margin. So, Adyen, which is a Dutch payment company. It’s a very popular stock actually, was one of its competitors. But Wirecard had much higher margins, and was growing at 30% a year. The story always was, well, they’re doing payments for adult companies and gambling websites. That’s why they can charge much higher margins. They go near businesses that no one else will touch, which obviously, already gets questions firing in your head about, why would you, why those businesses? But anyway, since 2015, and they’ve been the subject of quite a lot of speculation from– The short sellers have been after it since 2015. A lot of stuff didn’t really add up about the company, what it was saying to investors about its technology, and its money flows, and how good it was winning new customers versus they had a payment–

As one example, remember they had a payments app, which was just a very vanilla payments app. You open it up on the app store, and it only had 10 reviews, and they were like two star. And then, you go on one of their competitors in the UK, and it would have 20,000 reviews. You’ll just be like, “Okay, well, clearly, something is wrong here.” But there was a lot of incidents like that, and there wasn’t a huge smoking gun. It was very incongruous, the entire thing. But it was growing at 30%, and had 30% of EBITDA margins, and for a lot of fund managers in Europe, where we’ve had GDP growth basically zero, that was a pretty enticing prospect. So, it got a lot of people, a lot of investors work in this thing, and it had a very charismatic CEO. We all know that kind of story.

But anyway, so, in 2019, the FT, after writing about it a bit in 2015, and then leaving it, we began to look at it again, we had some whistleblowers come to us. Basically, the company got so big that it began to have to hire serious people. When you hire serious people at a company that’s misbehaving, they actually tend to whistle blow, and I think that’s one of the issues with fraud, why a lot of fraud stay very small is because when you get to that €3 billion, you can start hiring people who will blow the whistle. If you keep it under a billion-market cap, no one’s going to look, and no one’s going to really care.

Tobias: Hot take for the fraudsters just right there, keep it under– [crosstalk]

Jamie: Yeah, no, also, the problem is you promised growth. You have to maintain a low market cap while still growing. But yeah, we got some whistleblowers and it all kind of snowballed. They accused the FT of– I think they accused us of all sorts. They were a very dastardly business. They were following our journalists. They were hiring ex-Mossad types to try and take photographs of short sellers. They would go into quite extreme lengths for a business to shut down stories, and put a lot of pressure on our journalists. Then, the German financial watchdog opened up a criminal investigation into the FT as to whether we were– So, we were under serious legal pressure– and this was a darling of the German stock market.

We did a big story. I think it was on January 29th or 30th, 2019 after getting some whistleblower stuff in the year before. It took three months to get this story out from what I recall, and the share price fell 40%, and it all kicked off. For the whole year after, we were under this amazing amount of scrutiny and it was ridiculous because if you’re going to manipulate markets, you might as well put something in it for you. So, it wasn’t really– [laughs] a bit of a weird one. But anyway, so, by 2020, the company was still saying, all was fine, but it got to the point where the board of Wirecard, the supervisory board said, “Okay, we’re going to do an independent investigation.”

PWC did an independent investigation, which left a huge amount of questions over the business. Then, Ernst & Young, who had signed off on its accounts the year before, I think it was June 2020, basically, after delaying the current accounts, the accounts were getting delayed, and delayed, and delayed, and I think there was a deadline of June 30th. I think during mid-June, a press release coming out saying, they said, they had 2 billion in cash, in these two banks in the Philippines, that cash doesn’t exist. It basically turned out that half the business, a profitable side of the business just did not exist and had not existed for 10 years.

Actually, there was a payments company there, but as we can get as a payments company is low margin and was actually losing money, and it wasn’t growing. So, they basically just made up half of the business. The CIO, he escaped to, we think, Belarus never to be seen again. He had some interesting ties with some international characters.

The CEO is currently in jail awaiting trial, I believe, and the stock is at zero. So, we were very much vilified for our reporting. But there were definitely times internally and even talking with friends about it, we were like, “Is this worth the risk for us to keep poking, or are we wrong?” We could be wrong. It’s completely– and that happens. You get bad sources or you get the wrong– Lord knows, I’ve been wrong about some companies. Yeah, I think it was a good moment at the FT that day. Never want to see a company go to zero, people lose their jobs, etc. But the amount of pressure we’ve been under, it was kind of a nice release. Bonkers story. I could go on about it.

Tobias: Perhaps the most baffling part of the whole thing was the regulator opening a criminal investigation into the FT. How were they persuaded to do that? Did the company have some sort of in with them?

Yeah, German regulator files complaint on alleged Wirecard manipulation. The German financial watchdog has filed a criminal complaint against two of our journalists and several short sellers, accusing them of potential market manipulation over reports about suspected accounting irregularities. That must be the most legal first paragraph the FT’s ever written. [laughs] So, that was on April 16th, 2019. Yes. I don’t know. It’s hard to say I think, in US capital markets, you guys are very lucky to have very healthy, skeptical capital markets.

It might not seem like that all the time, and particularly this year, it felt like it’s out of control at times. But at least you have a very healthy short selling community, you have the First Amendment, which means you can’t get sued for libel, which is a big problem in Europe, and the UK has some of the most aggressive libel law in the world. If you’re a Russian oligarch and you can sue in the UK, you will sue in the UK, because you’ve got a very good chance of winning.

I think with this one, we were just– Someone was talking in someone’s ear. Big companies, as we know, have political power and somehow this came to fruition. I think it’s important to know with European small countries, capital markets where it’s at, the billionaire and upper millionaire class, they all know each other. When we’re talking about America, there’s probably an insurance company in Kansas City that would be the fifth biggest insurance company in the UK if it was here. But I’ve never heard of it. It is family owned, it ticks along, it’s doing great. But America just is so big and so rich on a per capita basis, it’s such a much bigger economy than all these other European economies, that you don’t get this web of people or just everyone knowing each other.

I think with this one, we’ll find out more, Dan’s book is coming out at some point towards the end of the year, and it’s going to– from what I’ve heard, it’s going to be pretty exceptional. I think it was all politics, basically. Germany has SAP, which is Oracle of Europe. But apart from that, there was no tech heroes in that country. So, I think there was an element of trying to defend their one company that was doing 30% revenue CAGR, as opposed to Deutsche Bank or whatever so. And as also in Europe, there is a distrust of Anglo-American capitalism as well.

Definitely, after the financial crisis, German banks bought a lot of that paper that ended up being dogshit. I think there’s just a general distrust– They think we were just coming in axes access to take apart their capital markets. To be fair, sometimes, they’re right, but I think a lot of the time they’re wrong. So, it was a combination of things. But yeah, politics and then the suspicion of Western capitalism, I think, or the way free market, Anglo-American capitalism, I think it just combined there to go to a ridiculous extreme.