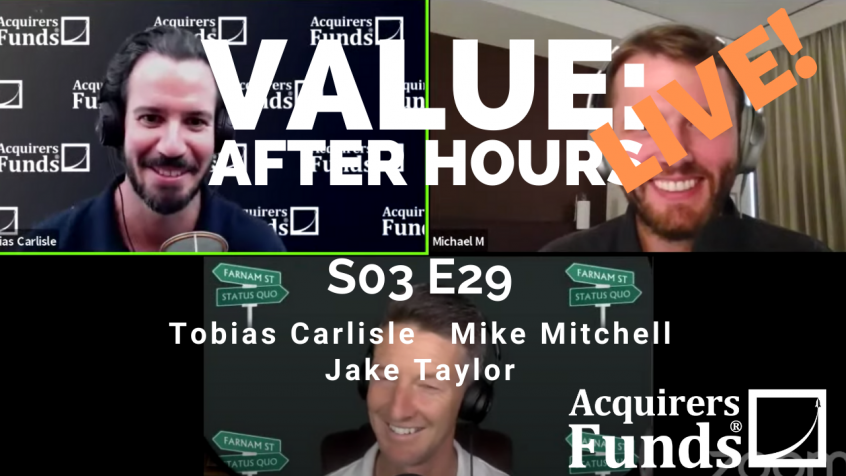 In their recent episode of the VALUE: After Hours Podcast, Taylor, Mitchell, and Carlisle discussed The Real Cause Of The Lumber Spike. Here’s an excerpt from the episode:

Michael: But the nuance, what you’re describing that happened which we all saw and got discussed by no fewer than me of the spike in lumber, it was something that has never happened in history. In the history of recorded lumber prices, you’ve never seen anything like that.

I happened to be involved in something that was doing lumber at the time, but when I saw that, I was like, “Wait a minute, this is different. This is not something that–” In my mind when I see that, I’m like, “I want to explain what what’s driving that?” In some cases, there are things that are non-usable commodities. I’m going to jump out and say something like bitcoin, which I know I’m going to get shit on, sorry for saying this, but– [crosstalk]

Tobias: Oh, gold. You can gold.

Michael: Right. It doesn’t have a use. You look at it, and you can say jewelry, but that’s a small, it’s tiny, and you could say there’s industrial uses for gold, but it’s tiny. Really, people look at as a store of value. You can see these speculative price spikes, and you do see them all throughout history. It’s pretty common. It’s not common in lumber. The reason it hadn’t been common in lumber is because the old line of thinking for 30 years is that the mills can always produce whatever the demand is for lumber. The second the prices start to rise, the mills crank it out, and then, it just brings the price back down.

Tobias: You’ve also got the demand side too where people, they are not going to spend-

Tobias: -too much on their house. Yeah. [crosstalk]

Michael: Yeah, correct. That is the line is that high prices cure high prices. As people see the price of lumber go up that they’re sensitized to that and they say, “Okay, I’m not going to be able to pay the extra $10,000 or $20,000 that’s going to cost my home. I’m just going to wait.” Sure enough, the price goes back down. My view or my bullish stance on lumber had been driven by watching that spike, and then, studying the differences between the current supply dynamic and the current demand dynamic. I’ve taken the view that the problem was not the supply issue. The problem was the demand issue, and the demand ramped very quickly.

In supply, and this probably won’t surprise you, but since 2005, since the housing crisis, that’s when supply peaked in mills. It’s also when housing peaked. So, it makes a lot of sense when new homes get built, you need more mills and you need more lumber. You saw that new homes are peaking, and mill capacity was peaking, and then what happens, the housing crisis and the crash, and then mills capacity just tanks, and then slowly recovers with housing.

But you see something really interesting. You can get this from West Fraser and again, I always say this, I just want to be very clear. If you let me talk, this will be an hour of me just droning on about this–

Tobias: That would be ideal.

Michael: [laughs] The West Fraser put out a really interesting chart in May, and they were showing how the capacity had been keeping up with housing, which had been a very slow recovery, which we all know. But what’s interesting is in 2016, capacities topped out and then started to decline. You saw this and you say, “Well, why?” and there’s very specific issues happening in Canada. There was pine beetle issue, there’s a fire issue, but really, it was the Government of Canada saying, “We’re just not going to let you cut more trees.”

That’s just it. I could go into how would this problem gets better, how the problem gets worse. But regardless, they’re just not going to let you cut as many trees as they used to let you cut. So, if you want to get trees like far out areas that cost more you can do that. But if you want these trees around here, for us, we want to grow our forests back, we want to be sustainable.

You saw the supply. The supply coming offline has all been happening in Canada. In the US, we’ve been growing supply in the southeast. What I saw is, I saw supply coming down and it crossed where supply had come down and demand from new home construction repair and remodel had crossed this threshold. What initially happened when lumber started ramping is everybody like this– Shoutout to [unintelligible 00:14:26], he’s awesome. Everybody was like, “The old peak was 700. This is going to pass.” Everybody’s like, “I’m just going to defer lumber.”

But what happened was, it spiked in the late summer, and it went above 700. It came right back down to 500, 600, and then, it just started this relentless March that just in May, totally peaked out on the May contract, I think at 1500. At one point, it might have been 1700. What happened was everybody was deferring and waiting, and deferring and waiting. However, all the suppliers and the builders had committed to building regardless of the price. They had already stretched themselves, said “We’re going to do it regardless of the price.”

What’s happening was, the mills were just cranking out lumber, but they couldn’t crank out enough to meet the builder demand. Finally, there was this capitulation that happened, and you saw it in the really early summer, where the builders and suppliers were just like, “I have to have it. I have to deliver lumber to you,” and they found themselves short on lumber, they’ve been waiting.

Really, it’s a long-winded way of saying the problem was there was too much demand and not enough supply to meet the demand. My personal view is that, that dynamic hasn’t changed. I don’t know if it’s going to get worse, but it hasn’t changed. What has changed is that, the US consumer is going on vacation. All in the spring, when Home Depot and Lowe’s were seeing this move, and they’d been working off their repairing remodel assumptions from last fall and early spring, which were huge.

The DIY guys were like me, I was out building bookshelves all the time, putting on additions, and that had taken a lot of lumber out of the system. They bought all the lumber they could. They filled up their shelves, and then, when summertime came, nobody went Home Depot. Everybody went on vacation. Nobody’s out. The pro-business is still in very good shape, but the DIY business basically went to nothing.

When lumber rolled over initially, the belief was that it was going to be the building suppliers, the builders were sources of the world that were going to step in, and they were going to set the floor. They did step in and they set a price. The problem was that Home Depot and Lowe’s haven’t come back. The question to ask yourself is, and now, we know– I said it on a podcast at Value: After Hours, I think earlier, the magic number for new housing starts is north of $1.5 million. Really, if you get north of $1.6, the supply can meet that level of demand. But right now, we’re seeing $1.65. If we sustain that, we can’t do it. Then, you have D. R. Horton– Well, that’s a misstatement. We can do it. We just can’t do it on cheap supply. We can do it on more expensive supply, but we can’t do it on cheap supply.

We’re seeing that number be at $1.6 and D. R. Horton’s out seeing that number and saying, “We’re going to grow double digits next year.” Well, if D. R. Horton’s growing double digits, I guarantee they’re the biggest homebuilder, everybody else is growing, too. There’s a double digits, I don’t know. But it looks like the builders are finding a way to make $1.6 plus the floor. The question is, the builders now, they are the demand, they are what’s setting the floor in lumber– Well, the marginal cost in British Columbia is setting the floor number, but they’re setting the demand side. What you need is the repair and remodeled step back up. That’s an open question of whether that will happen. I have a–

Jake: -one, I need you to tell me when it would be a good time to finally replace my fence that’s falling over in the backyard-

Jake: -as far as lumber prices go, and then–

Tobias: You’ve got to build it out of brick, JT.

Jake: [laughs] Yeah, good point. Two, I was reminded of– it might have been Terry Smith, who said this, although I might be misattributing it, but he said something like, “Never buy a company that sells anything made out of metal,” because people can always defer the purchase.

Jake: If it’s made out of metal, it’s going to last at least until they want to buy it on their terms.