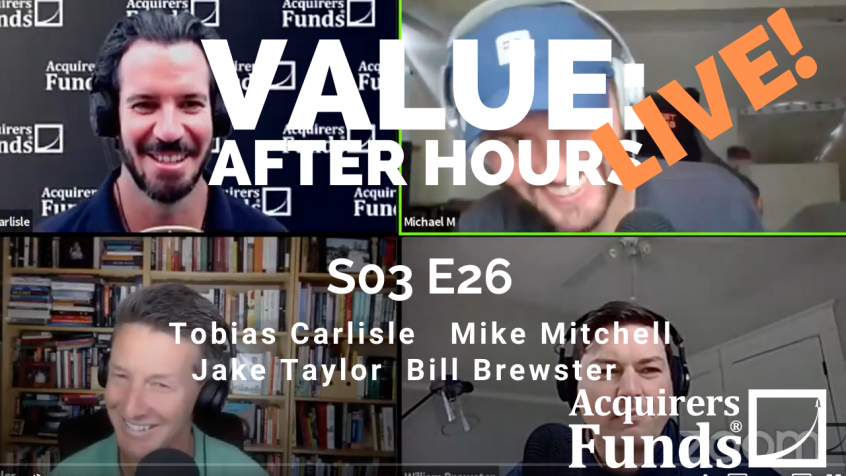 In their recent episode of the VALUE: After Hours Podcast, Taylor, Mitchell, Brewster, and Carlisle discussed Animal Spirits. Here’s an excerpt from the episode:

Mike: That’s right. That was the Fed coming in and saying, “I will not let this blow up.” It’s the liquidity. That’s what would have taken it completely– When Buffett said two years ago in the 2020 annual meeting, “There’s about a week where credit markets froze, and my phone was about to ring.” That’s what he waits on. That’s what he waits decades for. He wants to call, because he knows, when you call him, he gets whatever terms he wants, because he’s the lender of last resort. He’s got the most money, and he’s going to be the last one to go bankrupt in all of us. When Powell came out and said that’s not going to happen, McDonald’s put out a paper, so senior debt– This is McDonald’s, senior debt, they got it done, and it was 500 or 600 basis points spread for McDonald’s, which is insane. They got that done in March. That’s what it cost.

Two weeks later, they wouldn’t been able to do it. Fed comes out and says, “Boom, it’s no problem. We’re going to be buying all the stuff.” All of a sudden, their spread drops, whatever, 100 basis points or something. Then, they go out and what do you see? Everybody goes out and issues debt. Then, what does management do? Well, we can survive, because now we’ve issued all this debt. Then, everybody’s like, “Oh, my God, the Fed’s standing there. Now, we got to go nuts.” Then, that’s when you see people chasing these crazy assets up. It’s just confidence. It’s the animal spirits. That was why I got bullish. Could have been pure luck on my part probably was, but that’s what got me bullish last year.

Tobias: I think animal spirits has something to say in the short term, but it’s very hard to predict. I think longer term is some other factor. But maybe tops and bottoms, it becomes animal spirits. I have no idea where we are at the moment, but there are lots of little indicators that I like to look at. I like that fear and greed index to tell you. Fear and greed index did drop down under 20, that’s a Value Stock Geek idea by the way. I thought that was a good one. Just because when you’re in these events like March 2020 or other bottoms– not that you necessarily know it’s the bottom, everything’s in freefall, and you’re terrified, and that’s a good countersignal that you probably should be out there doing some buying. But it is also nice to have something that’s just a little bit more quantitative that says, “This really is an extreme moment in the market.”