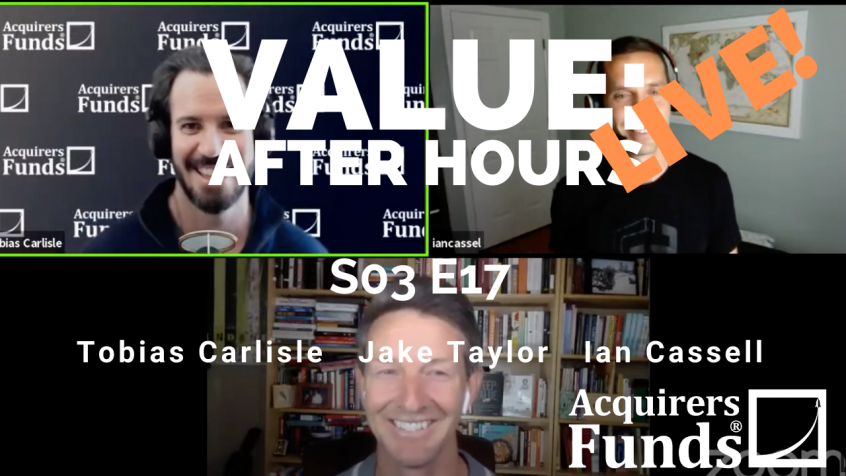 In their recent episode of the VALUE: After Hours Podcast, Taylor, Cassel, and Carlisle discussed Investing Lessons From Falconry. Here’s an excerpt from the episode:

Jake: All right, so I came across, one of my friends told me about this idea that’s actually from falconry and it came originally, I think he learned about it from Yvon Chouinard who was the founder and driving force behind Patagonia. I don’t know if you guys know much about him, if you’ve read his book, Let My People Go Surfing. Just a terrific book, and just like the culture that he built is so unique and I’m very– I don’t want to say envious, but I think he really did a lot of things right on a long-term sustainable business standpoint. If you know about him, you know that he was a hardcore, actual adventurer guy. It wasn’t just like, “Oh, I’m a CEO, buttoned-down, wear suits to work.” No, this guy’s like up climbing in the Pyrenees and just doing all this crazy stuff. He walked the walk. It wasn’t just like BS.

Anyway, one of the things that he talks about in his book is about in falconry, they have this term called yarak. Y-A-R-A-K. Be careful with your google searches there because it is slang for something you probably don’t want to come across. In this context, the context that we want to use, Yarak is the state that a bird gets in when it’s hasn’t been fed in a couple of days. If you have a falcon and it’s just recently eaten, like you can’t get it to do anything. It won’t hunt. It doesn’t want to fly. It’s not doing anything. If it hasn’t eaten in a couple days, it gets into this state where it becomes hyper-alert and you can see it in the bird’s eyes like, do a google search of falcon, Yarak together and look at this bird. You look at him, you’re like, “Holy shit, this bird would tear me apart if it got the chance.” It just has that eye of the tiger kind of look.

The important thing is that the bird is hungry, but not to the point of being weakened. It’s ready to hunt and it’s in its optimal state. To me, it actually makes a lot of sense that when the chips are down and you’re hungry, evolution would have been a forcing function would say like, “Okay, well, you have to be at your best right now to make it through to the next round. We can’t afford to get so hungry that we become weakened and we can’t then provide for ourselves.” This acuity that happens to me makes a ton of sense from an evolutionary selection bias process. What can we do with that? What does that mean? Well, especially in a small business context, a company that is yarak, they’re hungry, they’re conserving resources has a very serious advantage.

One of the ways of putting your small business into yarak is inverting the popular revenue minus expenses equals profits. That’s what we all learn in business school. It’s a cliché at this point. The correct formula there is revenue minus profit equals expenses. This is almost like pay yourself first as a business, like carve out your profit ahead of time and then use your expenses that you have available to delight your customer in the way that you best can. You want that forcing function that will unlock the creativity that will allow you to truly provide a great experience, but also guarantee that you’re staying profitable and you’re keeping your business in yarak. We can apply this same thing to your personal finances.

Automatically saving a certain amount of your income will put your family, yourself, your team in yarak and it’s not about living an austere life necessarily. It’s actually about forcing you to examine the expenses that you do have and run them through the rubric of, “Is this making me happy? Is this doing what I want it to be doing for me?” If not, then it needs to go. You won’t do that unless you have that forcing function.

The other part that’s really nice about it as someone who’s been doing it for a long time is that the expenses that you do spend then, you can do guilt-free, because you know that you’re taking care of the future already by saving ahead of time. That’s a nice place to be because, I know, for me at least, I feel guilty spending money often and there’s a little part of me that likes to deny myself.

Buffett has identified this when he says that, “A fat wallet is the enemy of superior investment results.” Then, if we go back even a little further, Cervantes said that, “The hunger is the best sauce.”

Jake: Nothing tastes better than when you’re really hungry. Anyway, it’s a little falconry term that is fun and I think actually has some really useful life lessons.

Tobias: It’s a little bit like the Capital Returns book where– that’s something I’ve written about in Deep Value as well, where I said that, “What you want is companies that are good at husbanding capital through good times and having it there for the bad times, because that’s when they need it to–” which is funny given our conversation earlier about carrying cash, but I do think that– this is why it’s so hard. You want companies to be holding a little bit of cash or at least have some fire power in some respect so when they go through a bad time, they’re able to capitalize on it. Then the other side of that, I guess, is that you underperform a little bit through the rest of the cycle. It’s a tough business.

Jake: Well, you can’t optimize for both efficiency in the short term and resiliency in the long term. You have to choose one or the other.