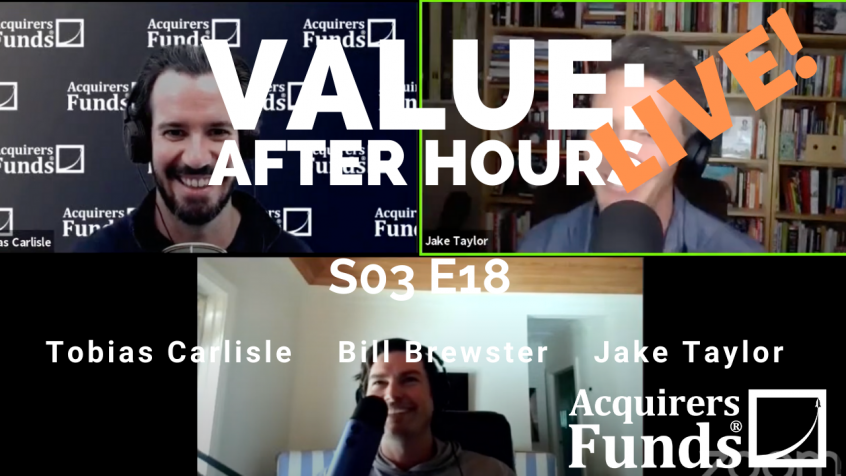 In their recent episode of the VALUE: After Hours Podcast, Taylor, Brewster, and Carlisle discussed How Many Of The Top Companies Will Be Around In 30 Years? Here’s an excerpt from the episode:

Tobias: So, the thing that stood out for me, the thing that I enjoyed the most was– because I’m in this project where I’m thinking about how can you identify stuff that’s going to work very long periods of time? So, he put up that list of companies. He started with the 31 March 2021 list of the biggest companies in the world, pointed out that five of the top six were American. Apple was number one, Saudi Aramco was number two, and then it was Google, Microsoft, and a couple of others in there.

Then, he said, how many of these companies in 30 years’ time will be still here? Then, he went back to 1989, and he said, “Here’s a list of the top 30,” and it was overrepresented by Japan, because Japan was at the very peak of its stock market bubble at the time. None of the companies from that list showed up 30 years later, which I thought was interesting. I haven’t looked over a 30-year period in my practice. I’ve been looking back about 20 years. And at 20 years, it’s almost impossible to identify. I think out of about 40 companies that get pulled up, about four or five survive through to the present day, which is extraordinary because these are companies that– they’ve got returns on equity over 20% average over the last five years. They’ve got margins that are greater than 40% average over the last five years. These are definitionally good companies. I thought it was a very interesting comment.

It’s something that he keeps on hitting me that this is, you have to be very careful, the longevity. I think he said that of the top 20 in 2021, he thought that a few of those might survive on but he didn’t think it was going to be zero. But he was also like it’s hard but not many are going to make it. I think he was hoping that Berkshire might be one.

Jake: I was told, never sell.

Tobias: [giggles] It’s potentially more of a philosophy than sort of an approach to– [crosstalk]

Tobias: Perhaps, don’t sell for valuation reasons might be the takeaway– from never sell, not from what Buffett said.

Bill: Yeah, well, you have to think about what’s the total current enterprise value versus what it possibly could be. That’s how you handicap selling.

Bill: Nothing is easy, bro. It’s fucking hard to make money in the market.

Tobias: When you look back in 1989, biggest company was $104 billion, was a Japanese company. That just seems like an insanely– Even today, it seems like a very big business. Then, you look at today, it’s a $2 trillion company. So, that’s 20 times bigger. So, 20 times bigger is a $40 trillion company. That’s hard. It’s just hard to visualize in 30 years’ time a $40 trillion company, but it’s probably going to exist. It’s probably going to be Google or something like that, but it just illustrates how difficult it is to conceive of those numbers given what we’re used to know.

Bill: Yeah. I think that’s why never sell has won for now.