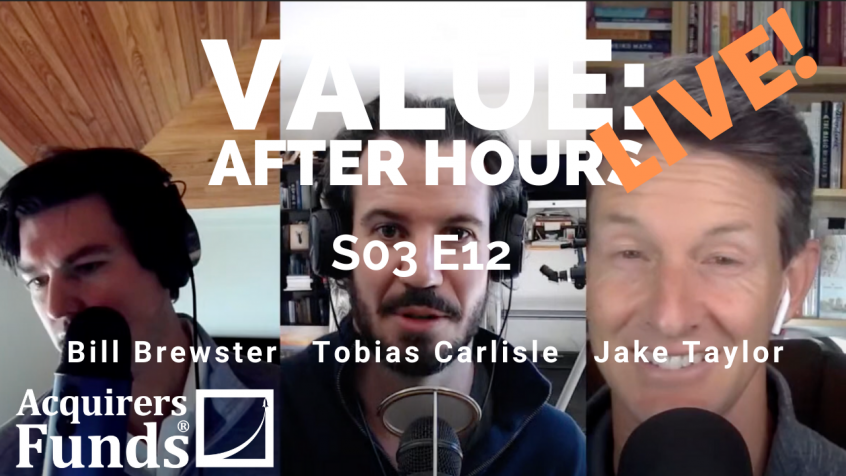 In their recent episode of the VALUE: After Hours Podcast, Taylor, Brewster, and Carlisle discussed the Risks And Rewards Of Concentration. Here’s an excerpt from the episode:

Tobias: I’ll take it away, because I’ve got the conch and I’m always lazy and I finally prepared something, so here I guess. It’s a nice bit, the JP Morgan paper, The Agony & The Ecstasy, the risks and rewards of a concentrated stock position that looked at the Russell 3000. Basically, 40% of Russell 3000 companies have negative absolute returns. You’d have been better of holding cash, in that instance. The reason that I wanted to highlight it, because I think this is potentially something you could put into your list of just stuff to be careful of. They listed out what are the primary reasons for business failure?

The first one is commodity price risks that cannot be hedged away. We probably already knew that, so just be careful of the commodity businesses. Government policy. This is a really long one, but that just about anything that they can change can hurt you, including regulation and deregulation. When the federal government’s moving around, you’ve got to be a little bit careful there. Intellectual property infringement by domestic or foreign firms. Foreign competitors whose market share is magnified by governments subsidies. The impact of patent trolls. Changes in US or foreign government tariff or trade policy. Fraud by nonexecutive employees. A shift in buying power to the firm’s customers, resulting from consolidation. Unconstrained expansion by competitors. I don’t know how useful that list is, but it’s just an interesting– everything that can go wrong. [laughs]

Jake: Or somewhere in between. [laughs]

Bill: Yeah, it sounds like businesses that aren’t particularly moaty can go out of business, sort of my takeaway.

Tobias: Well, how do you assess a moat? That’s a good question.

Bill: Well, I spent the morning reading about TransDigm. This person was talking about how they generally in aerospace, if you own the IP, that’s a pretty good place to play, and one of the things that makes it tough for a lot of people to compete in aerospace, is you need to be able to invest the money today in anticipation of the backend. The upfront development costs on the platform are not where you’re making much of your money at all, so you’re making it on the backend. But then if you own the IP, and you’re the sole source, that’s pretty moaty, I would think.

Tobias: What’s an example of that?

Tobias: Just specifically, what are they doing?

Bill: No. That’s where they make a lot of their money, but they integrate themselves in the supply chain up front, and then on the back end, they’re the people that own the IP, and they tend to be the sole source of small-ticket item, small-dollar value, [crosstalk] single-source, highly engineered parts.

Tobias: When the OEMs are developing their thing, they come in and they say, “We’ll help you” but they are integral to that process of developing whatever it is. “We’ll supply the parts,” and then down the road–

Bill: Yeah, they make little antennas, they’ll make the little seatbelt buckle stuff, they’ll make something that you put wires through that goes in the cockpit and whatever. It’s little stuff that doesn’t make a whole lot of sense to– once it’s already on a plane, and certainly it’s long into the lifecycle, it doesn’t make sense to stand up a secondary manufacturing plant that then you need to have go through all the FAA regulations, and it’s not so easy to copy. I think HEICO goes after easier-to-copy parts. TransDigm focuses on stuff that’s more highly engineered and smaller ticket size.