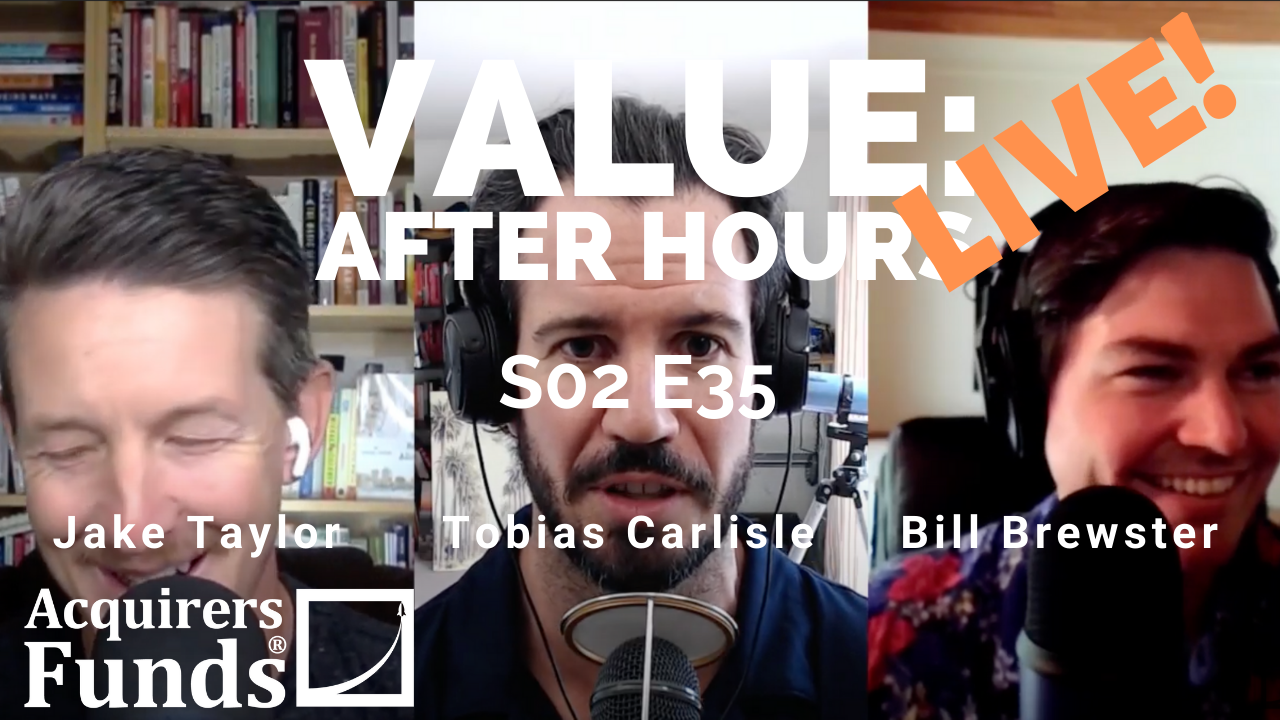 During their recent episode of the VALUE: After Hours Podcast, Taylor, Brewster, and Carlisle discussed Warren Buffett Buys Japan. Here’s an excerpt from the episode:

Tobias: So, Buffett’s bought five of these Japanese trading conglomerates. The yield on them is between almost 6% and the lowest is at 3.25%. And then, Shai Dardashti put this together in a tweet, shout out to Shai. He said, “Berkshire’s borrowed all this money in yen.” And all these notes are due way into the future. He’s borrowing between 0.17% and 1.1%. So, his most expensive note costs much less than the lowest yielding dividend. And it’s non-recourse debt, so it can’t be called, it’s not like a margin loan where the stock moves against you and you get it yanked. He can hold it out to until it matures. But Postmarket had found this really great tweet or found this really great– Buffett was at the University of Denver, and he advised students to borrow at 1% to buy AT&T, which was yielding 6%. This is Malone. Apologies.

Tobias: I think Everybody knows that Buffett is a great investor, but he’s also a great deal maker. And I think that Chris Bloomstran highlighted that. And here it is, once again, he really is just one of the best deal makers that’s ever walked the earth as well as being a very, very good– the best investor that’s walk the earth. Got to take your hat off to old fella, he’s still doing it.

Bill: Yeah, the problem is he doesn’t lever up to buy these businesses. Stop messing around with this stupid ass dividend carry trade and go out and buy some real stuff and use some leverage.

Tobias: Hasn’t he just done that? Isnt that what he’s done?

Bill: I love him.

Jake: But isn’t that what he’s just done? What am I missing?

Jake: That’s a great move. How long before this pays itself off?

Tobias: Yeah, that’s good question. I don’t know exactly, 20 years or something like that, probably.

Jake: Probably something like that. But in the meantime, there’s a good possibility of them raising dividends. If my understanding of shareholder appreciation or respect in Japan, which has been I think on an upward swing, there’s other ways to win other than just the carry trade of borrowing the yen and cash at the divi.

Tobias: I don’t know if it’s a carry trade as so much as he’s just financing those acquisitions but he gets the carry trade as part of it and he also gets– this is according to some of the articles that I read. He gets an entree into– he can do other deals with these guys. And he can take his holdings on fully maxed out at this level. He can take them up to about 9.5% before he triggers some substantial holder issue. I think Bill’s in Matrix again. There you go. He’s back.

Bill: I’m deep in the Matrix if you can hear me.

Tobias: Where are you recording from? Bill, you’re on the moon and now you’re back. [laughs]

Bill: It’s not good. I don’t know why it’s so bad. Anyway, I’m not trying to sound mean to Buffett. I love Buffett. I’m just saying I don’t know. There’s weird stuff going on out there, that’s all I know.

Jake: You’re not going to give him the 90th birthday break?

Bill: I love him. I’m just a schmuck. I’m not trying to really go at him, but I do think, come on, man. If you’re going to go out and get something, go out and get something. I don’t know that like issuing yen debt to do a bunch of dividend-yielding Japanese companies is the most exciting thing I’ve ever heard, but I respect it. It’s an OG move for sure.

Tobias: I think that your advice to both Musk and to Buffett is the same, just go bigger.

Bill: Well, Buffett– there’s so much money out there right now, and you look at some of these shitty companies that are issuing debt and it’s just free and it’s there for him. I understand why you don’t want to be reliant on the kindness of strangers, but I just don’t think– right now there’s… the debt is so cheap, like I don’t know. Yeah… in some equity.