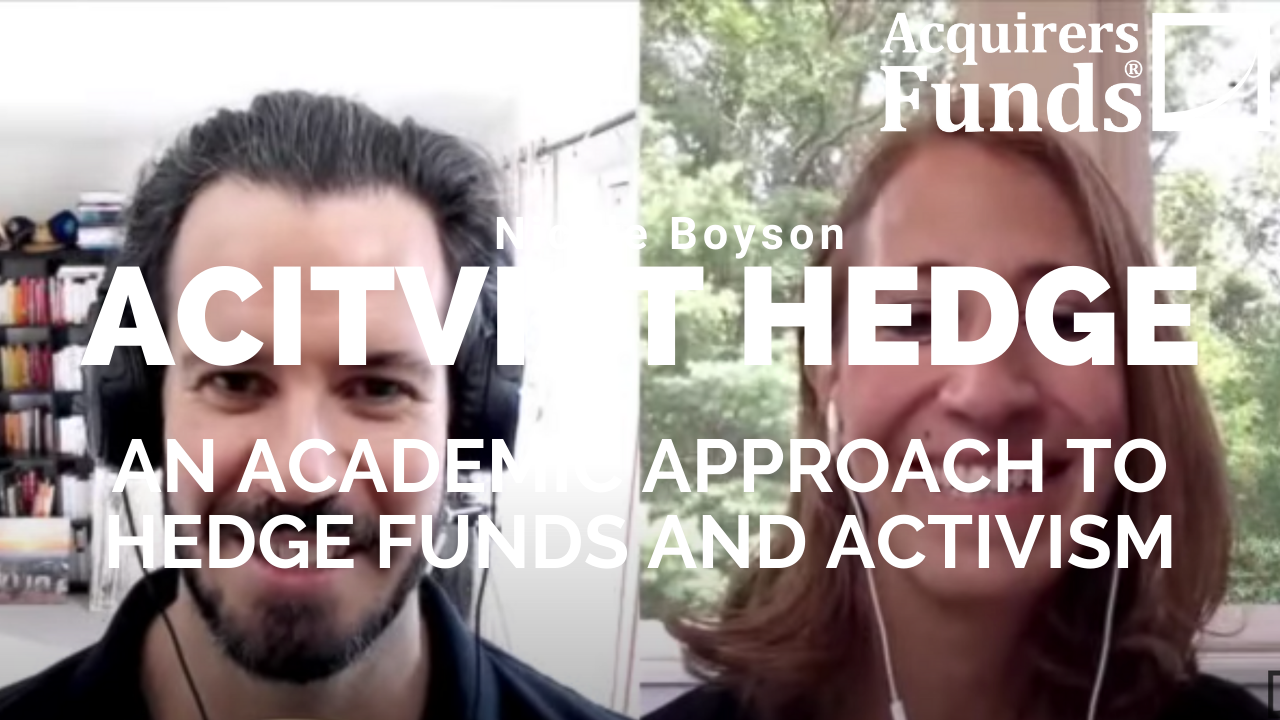 During her recent interview with Tobias, Professor Nicole Boyson discussed Hedge Fund Contagion and Liquidity Shocks. Here’s an excerpt from the interview:

Tobias: In the SSRN, I was looking at your most downloaded papers. So, that’s Hedge Fund Contagion and Liquidity Shocks. Why is that paper so popular?

Nicole: Well, I have a really famous coauthor, René Stulz is my dissertation advisor. But also, I think it’s just a really cool and timely topic. When I graduated, I was working, I think, at Purdue, I might have been at Northeastern by the time. René called me and said, “Hey, I’m thinking about contagion and liquidity.” He had done a bunch of work in that space. The idea of contagion is really interesting. It’s that you think about assets that are generally not very highly correlated. So, maybe think about stocks and bonds, or maybe think about US stocks and emerging market stocks. There’s correlation but it varies over time. And it’s not usually obvious or high, because different macro factors are going to drive it. There’s a big literature on financial contagion, which effectively says, “When things go bad, assets that are not typically very correlated suddenly [crosstalk] correlated.”

Nicole: Yes. You’ll hear people say, “Correlations go to one during the financial crisis.” That’s a little bit of a stretch, but not too far up. This was pre-crisis. It was like ’04, ’05 when we started the paper, but we were thinking a lot about, is there contagion in hedge funds? In other words, if things go bad, and we were defining bad as we didn’t have like a financial crisis. We ended up having that, and it was in our paper.

But more generally you’re in a bottom fifth percentile of return distributions or something like that. What happens? Do hedge funds that are different styles, equity market neutral, long-short equity, convertible, our fixed income, our relative value, name all the styles, do they get closer? Are they more correlated when things are bad? If that’s true, that’s particularly not good news for hedge fund investors who are typically being sold hedge funds on the premise that they are going to have lower volatility or be good diversifying tools. And so, that was our basic premise. We started writing that. We did find that correlations increased during bad times and there was some evidence of contagion.

Then, the financial crisis came which gave us more data points to look at things being really bad, and our paper ended up being focused a bit more on the recent crisis than say the prior recession. But what we found was that, not only is there this contagion across different hedge fund styles during bad times, but it seemed to be very strongly correlated with liquidity. So, the paper is called Liquidity Shocks and Hedge Fund Contagion or the other way around. We looked at liquidity shocks in the repo markets. Again, the big liquidity shocks that we saw during 2007, 2008, 2009 when markets were freezing up, and we saw, unfortunately, for hedge fund investors that contagion seemed to increase during those times.

Tobias: What’s the driver of that?

Nicole: Yeah. So, the liquidity stuff is really interesting. There’s a whole bunch of work. There’s this sort of famous paper by [unintelligible [00:40:03] and Peterson that looks at they call– I’m forgetting the name of paper, Liquidity Risk or Tail Risk or Contagion Risk. And they’re looking at this idea of liquidity spirals where you’re going to have shocks to asset liquidity and you’re going to have shocks to funding liquidity. So, you can think about asset liquidity. I hold a bunch of risky stuff on my balance sheet. And sometimes, I can sell it, like think of risky mortgage-backed securities. When times are good, everyone will buy that because housing prices are going up forever. Risky securities are risky or not risky until suddenly you freeze up.

You have this downturn in the mortgage markets, and you– just picture banks to keep it simple. Banks are holding a bunch of risky stuff. We don’t know how risky it is because it’s fairly okay. But during a normal time, banks can pledge their assets or sell their assets relatively reasonably well. During bad times, everybody starts to get nervous.

So, there’s liquidity shock on the asset side, which means that even as a big investment bank, it might be hard to sell some of these risky mortgage-backed securities. I might not even be able to pledge them as collateral. And so, then that gets into the funding liquidity. Funding liquidity says, “I’ll lend you money if you pledge me some collateral, but I don’t trust your collateral.” And so, this idea of spirals of, I have risky assets, they’re now suddenly illiquid, I need cash because I am a highly levered firm, like most banks were pre-crisis, and I need to borrow from in the short-term money markets. People don’t like my risky assets. I’m suddenly hitting a funding liquidity shock, what do I have to do?

Well, I have to sell some of those assets. Well, gosh, it’s not a great time to sell your risky assets when the risk is coming true and so, I’m going to engage in– we’ll call them fire sales if you like. I get to sell my assets. I’m not going to get what I want for them. That spirals downward.

So, this idea of funding liquidity and asset liquidity, we took that to our hedge fund data, and of course, we can’t look at all the holdings of hedge funds, but we can base– we can look at the measures of funding and asset liquidity and see how they correlate with different styles of hedge funds and the troubles that they might have had during a financial crisis. And so, you can see the fund shrink, you can see flows coming out, and you see effectively values dropping. And sadly, if everybody’s relying on the same funding source and that dries up, everybody’s going to have to sell assets at the same time, and that’s going to drive down prices, probably well beyond fundamental values.

Tobias: Yeah, it’s fascinating. Do you continue to watch it? Did you watch it through the most recent March drawdown?

Nicole: I haven’t watched it very carefully. But what’s interesting though, is that hedge funds have been just kind of terrible since 2010. They came out of the crisis, they looked okay. A lot of them failed and we had to put up gates.

But what ended up happening, again, just this is my view, looking at hedge funds. You’re in this bull market where borrowing is really easy. Hedge funds make money when there’s volatility. Hedge funds make money when there’s something to bet against. If you have a secular bull market, where funding is cheap, it’s hard to justify your value as a hedge fund when the S&P 500 is crushing you all day long, and even on a volatility side, like we’ve got this nice smooth up. So, I think contagion is still important and interesting in the hedge fund space, but I think that the underlying macro conditions are such that I wouldn’t– I think it’d be hard to be a hedge fund manager right now. It’d be boring. Now, we’re seeing a little downturn–

Nicole: I know, yeah. I kind of looked at the recent downturn. I haven’t– But I do think that this idea of liquidity shocks and the spirals, everyone knew about it. And this paper by [unintelligible [00:43:43] Peterson was such a beautiful theoretical model and tons of us are out there testing it. I do think it’s still a potential issue. The Fed though has learned a lot from this as well and so the Fed stepped in and backstopped a lot of markets post crisis. I think now they’re pre-backstopping, and so I don’t think funding crisis is out of the question. But we’re not seeing anywhere near the pressure on short-term money markets that we saw in 2007, 2008.

Tobias: It was an extraordinarily rapid decline followed by an equally rapid recovery, that seems to have shot back over the previous highs. It’s as if didn’t happen.

Nicole: I know. Well, now everyone’s mad at the Fed, because they’re not buying more long-term bonds or whatever. We talked about that in my fixed income class. The Fed basically promised to keep rates at zero for three years or whatever, and the markets are still unhappy. So, it’s an interesting time to be an investor, I guess.