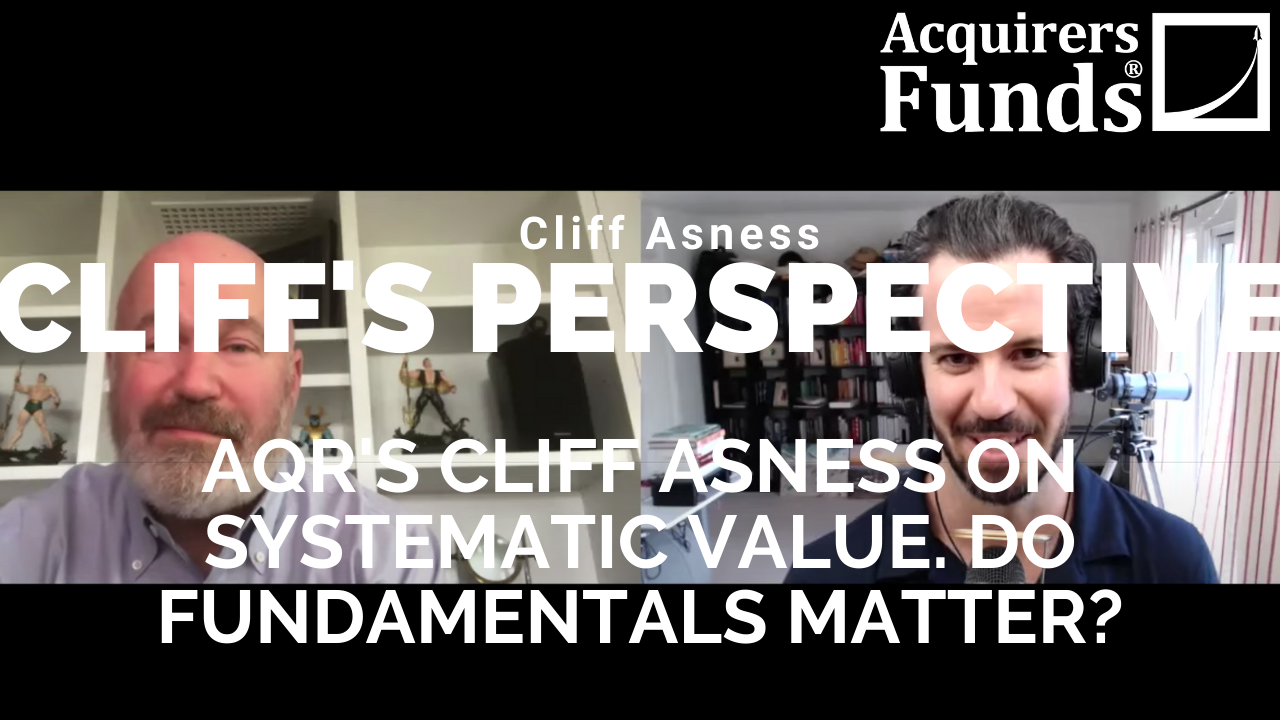 During his recent interview with Tobias, Cliff Asness, Co-Founder of AQR discussed Does Price-To-Book Still Work? Here’s an excerpt from the interview:

Tobias: I wonder if I could just take you through, from your colleague’s paper Israel, Lawson, and Richardson. They identify five of these arguments and then they deal with each one in turn. The first one is that book doesn’t work anymore and book is the value factor. When anytime anybody hears systematic value, that’s the first thing they point out. Nobody uses price to book to invest. And I thought that of all of the parts that they deal with in there, I couldn’t quite– they sort of seem to agree with that sentiment.

Cliff: Let me think about that.

Tobias: You would never use price to book in isolation, you would always use some– [crosstalk]

Cliff: Oh, well, that I absolutely agree with. Price to book, first of all, we think it’s somewhat less broken and they go through that, then other people do. One dirty secret about value investing is price divided by anything gets you at least somewhat of a value strategy. The famous equal weight portfolio is essentially a value in a small cap till that’s just one over market cap, is just moving away from that. If you divide price by anything– if you divide it by something smarter, you get a less noisy strategy, divided by– I don’t think the equal weight version is close to a particularly good value strategy–

Tobias: But better than market cap.

Cliff: And I think they and I both start with the– some of the stories about book being worse now are credible. If intangibles matter a ton more than they used to, price to forecasted earnings might pick that up really well because that’s in your ability to make earnings. Book might have more trouble picking that up. Now, again, their paper is deeper than mine. Mine is brute force, they go through explanations where they think that’s not as extreme as they think. But they and I absolutely agree. I could live without any price to book. That’s not a heroic statement, that is simply because price divided by anything, fairly correlated substitutes or druthers, if you have 15 to 20 value measures is to give price to book, a non-plurality weight but in line with many of the other factors, it is an aspect of value.

A small thing that’s actually a big thing at times, and I think you know this from our work. And this is debatable, someone else can take the other side, but we don’t believe in using value to take an industry bet or a sector bet. We wrote a paper on that. I told you I saw a lot of sentences like that in 1994. And pretty much since then, I’ve not been using value to take an industry bet. That helps with book. I would agree comparing the book of a bank to a tech company can get a little odd. So, a lot of the criticisms people have get a little weaker when you don’t– everyone thinks about value as tech versus textiles, tech versus financials. You can never take out that bet perfectly because you don’t have a perfect industry map. Some companies cross industries. But you could take out a lot of it. You could compare banks, to banks. And some of the criticisms, and they discuss this go away there, but I absolutely agree with them. Book should not have any special standing in a tongue-in-cheek way, because I’m more than a fan of Fama and French, but I do blame Fama and French and Frank Russell for this.

Fama and French made it their central measure. They’ve written plenty of papers saying, just like the rest of us, a lot of the other measures are really pretty darn similar, but we’re going to stick. They do like it probably a little marginally better and they have a good reason for it, it’s [crosstalk] lower turnover.

Cliff: Yeah, exactly. It’s lower turnover than some other value strategies. On net, we think we trade for fairly cheaply, we’d still prefer the mix. So, they might have a difference of opinion. But as always with those guys, it’s a well-founded difference of opinion. Between them and Frank Russell, making it a very large part of their value indices. A fair amount of the world is locked into thinking of price to book as value or at least as quant academic systematic value. And this is not just AQR, I think you’d be hard-pressed to find many practitioners who give it even particularly special standing.

And let me add my favorite irony. We have a page in a presentation, but we only look at five. It gets a little crazy if you look at everything, but we look at five major valuation indicators. I think we look at price to book, price to sales, which you actually compare it to what’s called enterprise value, not sales– I’m not going to be getting into that sales before interest, so you want to compare it to the whole capital structure. Free cash flow, trailing earnings, and forecasted earnings. And just for fun, we have our own periodic chart of the order. They’re either up or down, and then the order of which did better.

Obviously, value has been a successful long term and a very poor short-term strategy. And you see that where the boxes are clustered, they’re usually on the same side of zero, except in years where values return was middling. And then the small differences can make one negative, one positive. But if you look over this whole period, price to book is the worst of the five. It is the best of the five in the last three years.

Cliff: Which I just find– not that I’m enjoying the last two years at all, but I find that to be a really entertaining irony to it. And I actually think there’s some economics behind it. Bear with me, this gets a little convoluted, but I’ll get there. Let’s say we assume the price to book is a reasonable but not the best value indicator, the other ones are better. And by the way, when I say it’s been the best of the last three years, that means the least worse, the least bad. Price divided by anything, broadly speaking, you can always find something– the price divided by anything, it’s not been a good thing to be doing for a while. But price to book has been the best of a bad lot.

Imagine price to book is worse, what does worse mean? A book contains noise in it that’s not relevant for valuation. It doesn’t necessarily make it backwards. Sometimes, people think if book value is a noisy measure of true value, then it has to not work at all. No, you add noise to a process, you make it worse, but you don’t change the sign. It suddenly doesn’t become a suicide strategy. But if it is a worse version of value, what are you going to see? You’re going to see it over the long term, not do as well, which is absolutely what we see, it’s the fifth of five. But if you have a period where value of the concept, not a particular measure, if people truly are freaking out and selling anything that’s not a darling and pouring all their money into the darlings, the better you measure that, the worse you’re going to do.