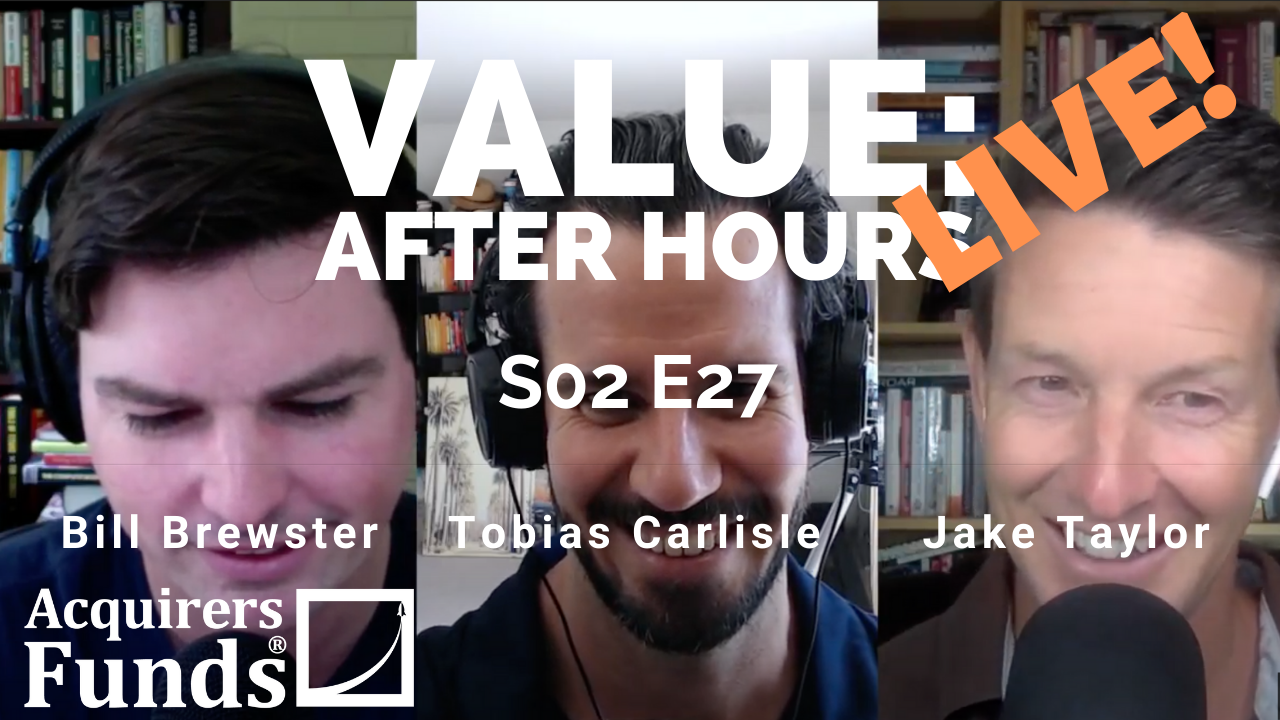 During their recent episode of the VALUE: After Hours Podcast, Taylor, Brewster, and Carlisle discussed Do Fundamentals Matter?. Here’s an excerpt from the episode:

Tobias: Yeah, he’s heard it. I’ve told him this one before. Is systematic value dead? Cliff Asness from AQR has a post on it. The post accompanies the paper. There’s lots of good stuff in the paper. Basically, the idea is that they’re trying to go through and identify each narrative about why value is not working and then to kill that narrative. And this is one of the last things buried at the end of the paper. I just found it interesting because it’s just funny. This is not necessarily about value investing. This is a fundamental investing question, wherever you find yourself on the spectrum. I know that growth and value are tied at the hip, but you could be more growthy than value. Is that right, Bill? Are growth and value tied at the hip?

Bill: I think they’re tied at the hip. I need to go back to the tape for that one. But, yeah, I think so.

Tobias: It looks like they’re tied at the hip.

Bill: Something about the hip.

Tobias: So, the question is how important of fundamentals to stock price performance? It’s interesting. The way they set it up, they have to create a test where it’s not a test of value skill or value. So what they do is that they say– and this is an example, this is not the way they do it, because they run it backwards, but they say, “Let’s get the 2022 forecast from 2021.” The forecasts that will be made in 2021 for 2022, and make it appear as if they’re available now. They’re explicitly cheating to do this. And if you had this data available to you, you’re looking into the future. It’s explicitly look-ahead bias. And, of course–

Jake: Well, are they forecasting the earnings?

Tobias: Earnings, yeah, in the future. So, you don’t get the actual earnings number, you get the projection, but it’s available a year in advance. That’s not real world. They make it very clear that it’s an explicit sheet. And of course, that strategy generates incredibly high Sharpe ratios, if you get an idea what’s going to happen in the future. But the problem is that it varies from year to year. You don’t get very high Sharpe ratios every single year. And so, the two years that it didn’t work, in the 1990s, in 1998 and 1999, it was negatively correlated. It was a low Sharpe ratio, but it was a negative Sharpe ratio. What that means is that the better the fundamentals or the closer you get to picking the fundamentals, the worse you did in that year, in 1988, and 1999.

It’s true also for 2019 and 2020. It’s unusual, it doesn’t usually happen. I find it hilarious that there are these 20 years apart. To your point before that, how people’s memories so short. I guess there are not many people around who were around even 20 years ago now. But it’s amazing to me that fundamentals basically provide a negative– the more you concentrate on fundamentals, the worse you’ve done over the last two years, and the last time that happened was ’98, ’99.

Jake: That’s what I heard.

Tobias: Don’t concentrate on fundamentals. You’ve got to use something else.

Tobias: [chuckles] Scrabble. Davey Day Trader’s channel. That’s how you do it.

Bill: The only thing that I don’t know about this is how much of the finding is because people are basically just requiring less return because that matters a lot in the math. If people have just thrown in the towel and said, “You know what? If I can get 4% to 5% out of equities, if bonds give me one or half or I’m worried about it going negative,” you can talk yourself into paying pretty rich prices even if the fundamentals don’t look very good in the front years.

Tobias: Yeah, I don’t know that.

Bill: I just don’t know if that’s part of what’s driving the behavior.

Tobias: Yeah, I don’t know what’s driving it, but do you think that it’s because people’s preferences for forward returns are lower? Do you think that that’s the thought process?

Bill: No, I think what’s going on right now is, if you are running outside capital, it is really, really hard to look at your clients and say, “I’m going to bail on tech and everything that you can sleep well at night and go long financials or something that you have pretty substantial business risk right now in the middle of a business risk.” Like Blackstone Schwarzman, I was watching him today, and he was like, “We’re not going into challenge business models because of valuation. We’re just completely avoiding it and that’s our strategy right now.” And I think that’s a lot of people’s strategy, because I don’t think that most people are worried about valuations rerating down in the next 18 to 24 months, and I think that they’re terrified that a second outbreak could actually destroy the businesses that they’re investing in.

Bill: Yeah, that’s right. Banks or retail or anything that has a lot of–