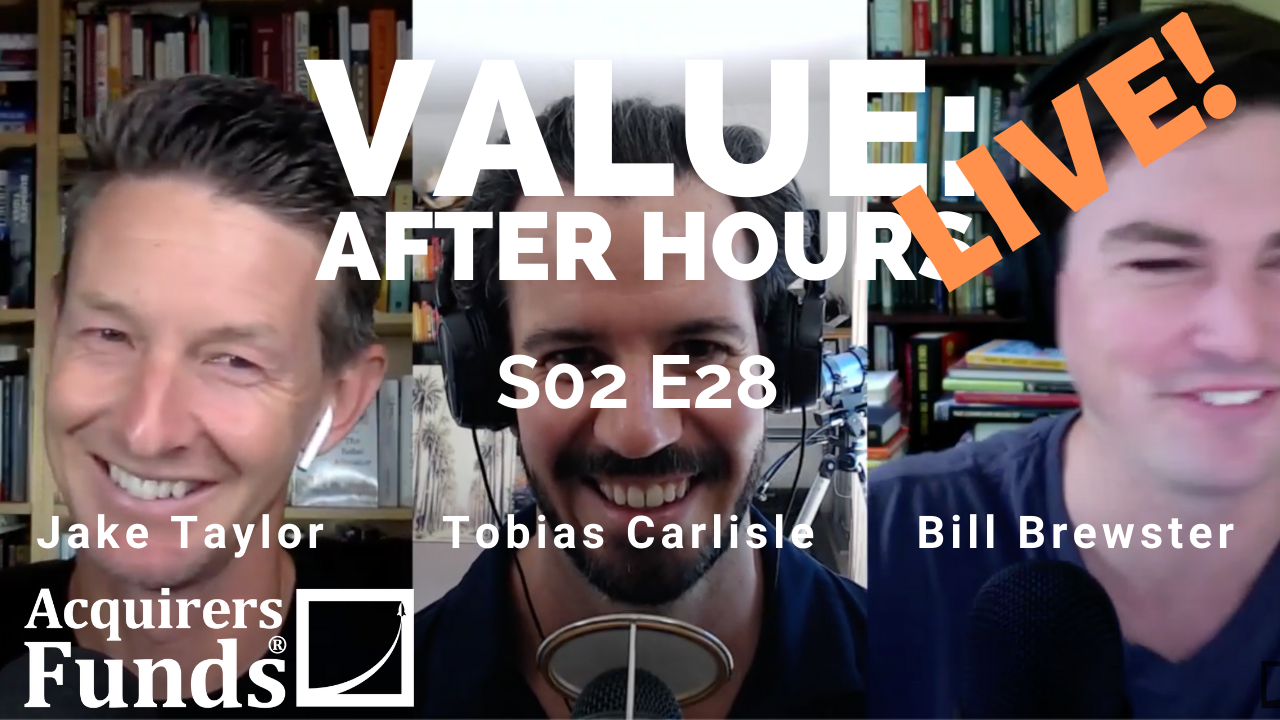 During their recent episode of the VALUE: After Hours Podcast, Taylor, Brewster, and Carlisle discussed Cheap Bank Stocks. Here’s an excerpt from the episode:

Bill: I don’t know. I’ve been on this financials deep dive because I just look at where they’re all trading and this is– I feel I’m looking back in waters that I narrowly escaped from, but the valuations are a whole lot lower than they were. There’s a bunch of entities. I don’t even care which one you look at, like Ally is one that I’m not super familiar with, but my general idea of that story is they were spun out of GM, created an online bank for deposits, quasi-internet bank now with the car loan legacy product feeding a lot of its current cash flow, and then they’re using that cash flow to invest in online bank. It’s growing like crazy. I think it’s trading somewhere between like 0.55 and 0.6 times book.

As a quick correction, the United MileagePlus thing went out at 6%. If you hear me say a number on podcast, numbers are not my strong suit off the top of my head. I am not Buffett, so check my numbers. My general competitive stuff, that’s what I spend most of my time focused on. If I’m wrong on that, I actually thought about it and I’m just wrong. If I miscite a number, that’s a brain problem– and this is all entertainment. None of this is investing advice. Anyway, Ally is interesting, Schwab is a steamroller gathering assets. The TD Ameritrade deal, I think is super smart. They sign this deal with USAA. USAA happens to be a military-focused organization, I suspect. I have no idea, but I bet the military is a loyal customer base. It would make sense to me that it’s a good partnership. USAA is going to refer Schwab, a lot of their wealth management or relationships in that realm.

That business, I think, is something like 90% funded by deposits. You’ve got a small section of preferred shares that I think are yielding seven-ish percent. When you’re 90% deposits and you’re buying residential mortgage-backed securities, are we going to get to a world where mortgages are 1.5%? Maybe, but in that world, who else can actually survive? It seems to me that with no trading fees, it’s a scale game and they’re stepping on a scale advantage the exact way that I would want them to.

Then you got Wells, which I know is a total shitbox but it generates roughly $15 billion of net income a year over the last 12 years. It’s gone through the global financial crisis, swallowed with Covia, lived through a pretty strict regulatory regime in the Obama administration.

Bill: Then they had the account scandal, then they were run by a CEO that wasn’t a banker. Their efficiency ratio is completely out of whack, and they’re still trading it like a mid-team cashflow, if you normalize it. I don’t know, maybe that’s an unownable asset. But I just look at some of the other things out there, and I’m like, “This doesn’t fully make sense to me.” With Wells specifically, I guess the high-level thoughts that I have is, I think the asset cap has driven them to better relationships within their commercial and industrial business. I don’t think that when you have asset restrictions, you’re just lending money out the door to everybody. Then, within the consumer side, you’re long a lot of real estate. It’s pretty strong LTVs. Your FICO scores are pretty good. I guess there’s a world where everything erodes and the loan book is no good and buying it at point eight times is a crappy bet. But my question is, if that’s the outcome at Wells, how’s the rest of the world look?

Bill: Yeah. You’re going to tell me all those businesses are going to go under and somehow Microsoft is going to go through unscathed? No. They’re going to lose a ton of licenses. And yes, they’ll start up again, but will Wells lend again? Unless you think it’s an idiosyncratic bankruptcy situation or something. There’s just the spread strikes me a little bit crazy. I listen to you talk to Cliff Asness, Toby. There’s just a layering of what I feel I see, what I think the retail participation is, what every smart person that’s a quant is telling me the dispersion between growth and value or cheap and expensive or however you want to slice the [unintelligible [00:24:18] or whatever. [crosstalk] Yeah, that’s right.

Then what I just viscerally feel and see and what I’m going through, it just doesn’t make sense to me here. It just feels too wide. Like major league’s home run, too high, too high.

Bill: What do you mean too high?

Tobias: Let me play devil’s advocate because everybody knows they’ve got a big weighting towards financials and banks and insurance and things like that. I get this question a lot. I’m interested in what you think because you got a slightly different approach to me. What if American banks start looking like European banks?

Bill: Look, I think it’s possible. That is why I favor the scale banks rather than the– I know somebody that I think is pretty sharp and he plays the regional banks. He plays them on the theory that he thinks that they’re going to have to acquire each other to scale up. I think that that’s a reasonable strategy. But I worry about the amount of tech investments that they’re going to need to embark on to make their product relevant. I guess that the larger American– JP Morgan, for instance, and Wells with what they lead on the debt side, I just think that there’s a lot of fee revenue that might be there that may not exist elsewhere. But I’m also sort of stupid in this area, I probably shouldn’t have a strong opinion of other banks. But I do think that there’s something about American culture that I viscerally feel would probably be able to extract more fees than, like Japan, for instance. But that may be wrong.

Tobias: How have Japanese banks fared?

Bill: Not very well. I’ll tell you though– [crosstalk]

Bill: Yeah, it hasn’t been good. But my portfolio, I have a lot in Charter and TransDigm. So, in a world where rates go to zero– some value guys are going to hate me, because we’re going to recap those companies and get huge dividends out of them. They’re going to be like, “But they have so much debt,” I’ll be like, “Let’s just keep heaping on more because it costs nothing.” So, for me, it’s a natural hedge to have some financial exposure. And Schwab to me is just one gigantic call option on rates, which may never go up. But if it’s not, you’re bringing in a lot of assets in the meantime. I know that you’re swimming upstream, but it’s just very intriguing to me.

Tobias: Does the thesis require REITs to really pay? Or can you get there just Schwab doing better and absorbing some of this other stuff?

Bill: You could not have a scenario where you’re investing deposits that cost you zero, at less than zero. That would not work. But, yeah, I think if you could get a 150 to 200 basis points spread over zero, yeah, that business could probably work. You’re probably not going to get super-rich on it, but I don’t think your downside is huge.

Tobias: I’m a value guy, mate. I’m not trying to get super-rich. That’s what I’m trying to do, avoid the downside.