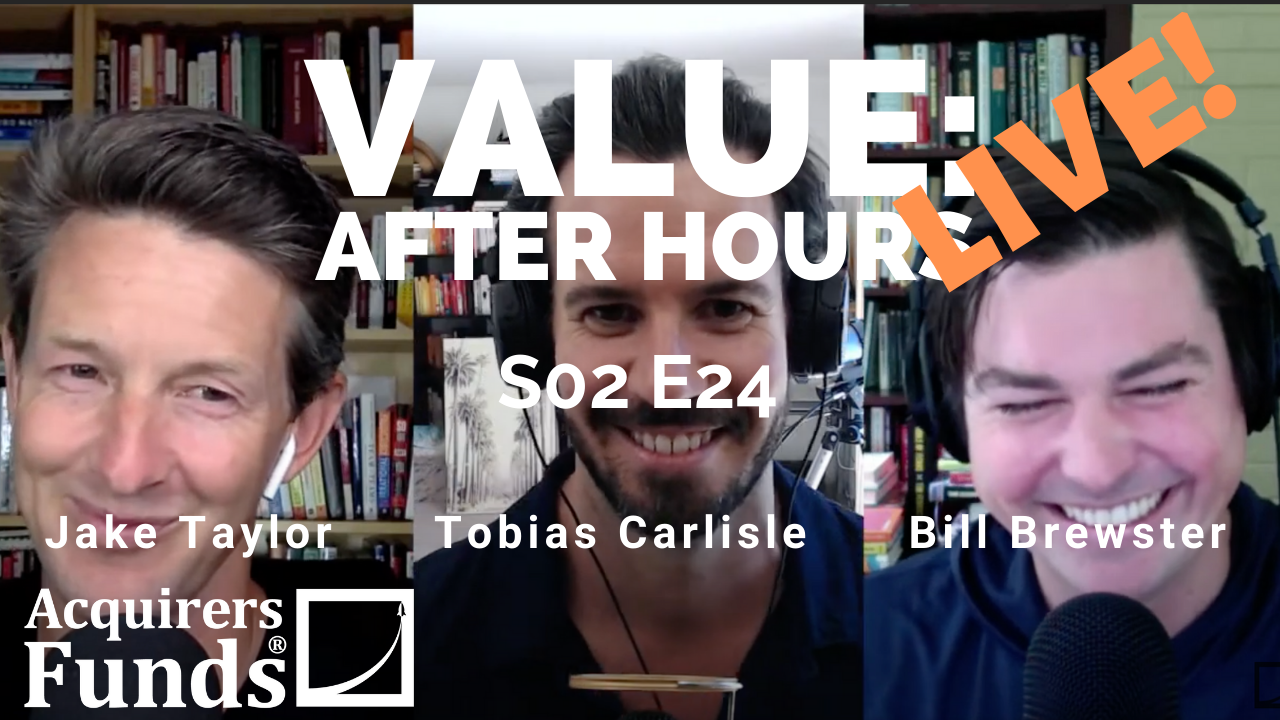 During their recent episode of the VALUE: After Hours Podcast, Taylor, Brewster, and Carlisle discussed The Right Size II. Here’s an excerpt from the episode:

Jake: Alright are we ready for some veggies to part two of on being the right size, Bill.

Jake: Last week, we talked about how insects can only get to be a certain size based on limitations of oxygen diffusion in their bodies. Well, this week, we’re gonna continue with that same paper that J. B. S. Haldane wrote in 1926. In this, now we’re talking about some of the advantages of size. All warm-blooded animals lose heat through their skin at the same rate of the unit of area that’s exposed. What’s interesting is if you took 5000 mice, they would be the same weight as a man, but because they have so much more surface area, they actually require 17 times as much food and oxygen as a man would. A mouse will eat about a quarter of its body weight every day, and a lot of that is just to stay warm. What ends up happening then is that you don’t see a lot of small animals in really cold countries. Spitsbergen, which is this island that’s in Northern Norway. Very cold obviously, close to the Arctic Circle. The smallest mammal there is a fox. So, you don’t have mice, you don’t have anything smaller.

Bill: Do we know what the biggest is?

Bill: You got orcas, you got seals.

Bill: Not for long.

Bill: I hope. I like the polar bear. Kind of a dick species, but I like them.

Bill: They’re like the TransDigm of species, they’ll tear you up.

Jake: Let’s talk about the human eye. Inside in your retina, you have about 120 million rods and about 6 million cones. And the diameter of each of the rods and cones happens to be the exact average wavelength of light. Each one is basically capturing a wavelength. So, for two objects to be distinguishable for you, you have to have sensory input enough to capture both inputs and create the electrical signal for your brain to see. If we had fewer rods and cones, and they were bigger, we wouldn’t actually be able to see as well. But they’re not smaller than a wavelength of light, because that doesn’t even really make a whole lot of sense because it wouldn’t– that same amount of light would then fall across two rods and cones and wouldn’t be able to produce a differentiated signal for you to read.

What we’re really talking about is Mother Nature backing into through physics and math, economies of scale. It takes a certain amount to be able to see, but it’s not going to waste resources, like with a whale having a giant eye, it doesn’t need it. All right. What’s the punchline of this for in a business context?

A lot of this is inspired actually by Andrew Wilkinson talking about these smaller internet businesses that produce $100 to $200,000 maybe of cash flow, but not more than that, really, because it’s just too niche. Well, I personally think that our way out of the economic malaise that I think is coming towards us, maybe not, I don’t know it. But I think our way out is not printing money and it’s not trying to prop up eBay prices of businesses, which I’m going to start calling the stock market now.

Jake: [chuckles] I’m hating. It’s going to be through people discovering that starting these little businesses and serving some little niche that they’re uniquely capable of serving will be able to create much more economic opportunity. How this relates to the eyeball thing is, if you think about like, you need a CRM maybe, you need an accounting system, you need some way to interact with customers like an emailing program, like Mailchimp or whatever.

Bill: Yeah. Teams, they got your cloud.

Jake: Yeah, but that’s the amazing thing. All of these things now are available in a stack for probably under 100 bucks a month. You could create a pretty reasonable business. Whereas if you had to have farmed that out, 20, 30 years ago, the size of the business that you would need would be much bigger. Now to have an eyeball, which I’m trying to draw the correlation here, in an economy of scale, to have an eyeball in a business, it requires much less resources. So, the size of the businesses that are sustainable could actually be much smaller than they were 20 or 30 years ago. I think that’s our ticket out of economic problems, and it’s not printing money, and it’s not throwing money at the big businesses and then trying to get them to promise not to lay anyone off. I have bad news for you. They’re going to lay people off as soon as it’s politically expedient. If we actually end up with 50% down in GDP. These are rational actors. They’re not going to just sit there and subsidize employees. That’s bad news.

Tobias: I love that analysis. I just wonder what the second order of that is, if everybody can make money from home, day trading or running their Shopify business, does that mean that things that require, if you have to cut somebody’s hair, or you have to get your hair cut, does that mean that those services become slightly more valuable because those people can’t get any operating leverage. They’re just going to be a one to one native physical store. I wonder if they get a premium, they probably deserve one.

Bill: I don’t know. But I’ll tell you what I have said for a long time to my wife and she thinks I’m joking. If my kids don’t like school, I am going to send them to be plumbers because I think being a plumber is an incredible profession. If you look at it the right way and it’s something that can’t be displaced. And to your point, if you think about it, like a business, you can grow it to scale. It’s got local economy benefits. You’ve got service based revenues. It’s a good business. I don’t know why your thought triggered that maybe I’m just trying to fit a thought in that conversation.

Bill: Well, it’s sort of like what [unintelligible [00:37:11] is trying to do in different ways, I think. The two thoughts that I had about the right size, and I know I’ve talked about a lot, but now that I’m talking about it, I might as well be public about it. The thing that I think that I have started to understand about how aerospace works is like Boeing is so big and the R&D cycles are so long, and GE is so big and the R&D cycles are so long and you get stuck in like these perpetual R&D cycles. It’s like, okay, this plane is coming off the bat or off the line, now we got to invest in the next one. And all our suppliers need to do it. There are little pockets of a value chain like that, where you can be the right size to actually generate the profit. And the mammoth in the whole ecosystem is too big to focus on that, that profit center. But that mammoth also requires you to deliver parts quickly. And there are things that scale enables that like the mom and pop just can’t do.

When people talk about going through supply chain and finding the kink where the economic benefits sort of like a crew, I think that’s a good way to think about it, is where is the right size to be in this and what are the recurring cash needs and who maybe doesn’t quite have that, but can benefit from some of it? I don’t know, it’s an interesting thought to keep in mind.

Tobias: There’s some great commentary, when you guys go back and watch this show, you have to see the commentary because you got some smart listeners, I’ve been really enjoying it. Keep going, JT.

Jake: I have one more.

Bill: They light me up saying that– [crosstalk]

Bill: -lose everything. Bring it, bitches.

Jake: The last, how to encloses this essay is that just as there’s a right size for every animal based on physics and math, there’s a right size for every human institution. He’s talking about like Greek city states and how they had direct democracy. You could sit there and have an orator talk about what legislature and they could vote on it directly. But you could only get to be a certain size to have because of the technology available at that time. You can only yell so loud for the crowd to hear you. Well, we found a way around that through representative democracy republic’s, Rome, and then even the UK and then the US. We’ve had an ability to have a bigger organism based on using representative, but I can’t help but wonder myself, and this is what’s really interesting is that Haldane was actually a really devoted communist in his youth. And after studying all this stuff, he recognized that communism probably couldn’t solve all the problems because it was too big. Like too many factors involved, too many people, too many opinions. I don’t know if it’s kind of a joke, but he thought Henry Ford could run Luxembourg, because Ford as an entity already had more employees than there were citizens, but he didn’t think that it could be able to run the US.

Well, this has me thinking a little bit more about, we have some tools nowadays that are absolutely amazing as far as communication goes, and I can’t help but wonder if, I mean, let me ask you guys, do you guys feel represented by your representatives in government today?

Bill: I don’t know, this is sort of a hard question. I mean, the real answer is, I think that people go and try to do the right thing. And then the size of the federal government requires fundraising all the time and incentives gets screwed up. And then within the communication tools that we have, the loudest voices are the ones that tend to win. The conversation gets skewed to the polls, but when I usually start talking to people or listening to representatives talk about non hot-button issues, I am more often than not pleasantly surprised and there’s more common ground than is perceived. That’s the real answer.