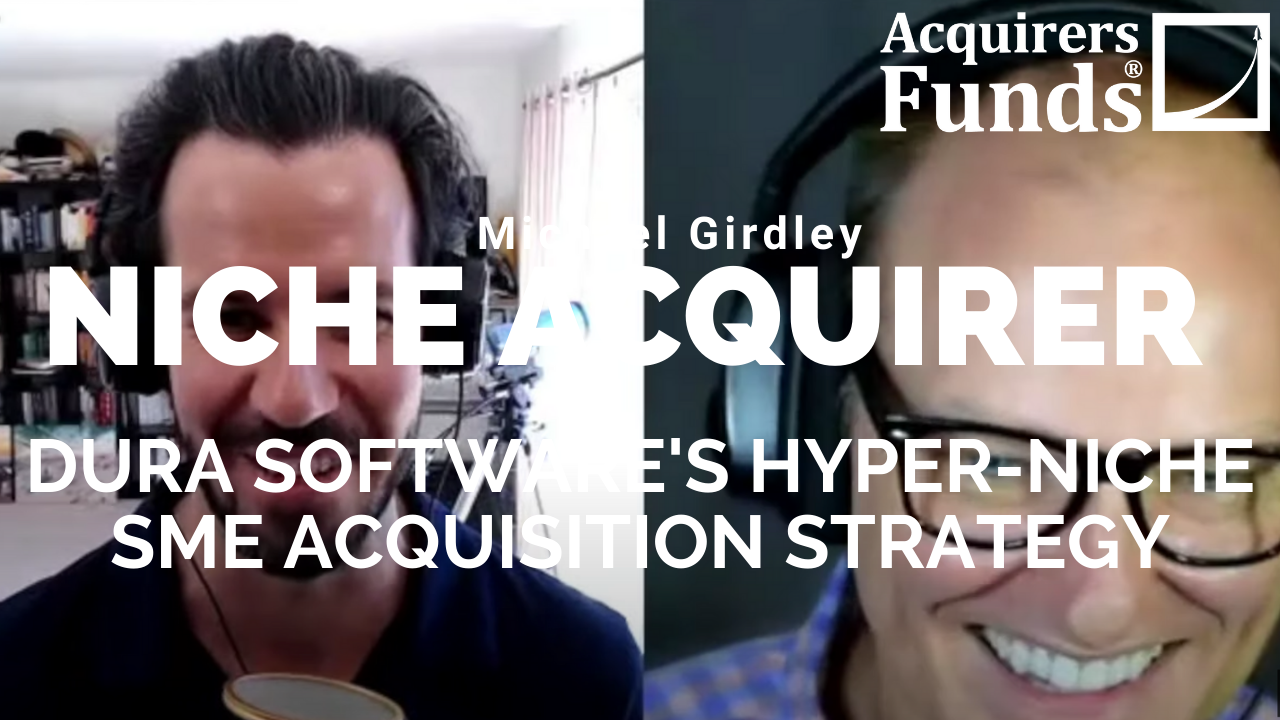 Michael: A good way to think about us as we do what Constellation does, but where they do a couple things different than us. First of all, Constellation is very upfront about saying they’re in the vertical market software business. We’re not stupid enough to try to compete with Mark Leonard and those guys, their capital is much better than ours will ever be. But we saw that there’s this other category of software that is more horizontally focused. We call it hyper-niche software, and that’s branding. So, we do what we do.

But basically, we go for these very niche use cases that Google, Microsoft, Facebook, they’re never gonna wanna be in that business because it’s maybe a $10 million TAM. For example, our very first acquisition of a hyper-niche product was this piece of software that’s used to manage very large fleets of multipurpose single-user devices, so like kiosk and digital signs. You’re gonna have 50,000 of these things. We went and bought this company, does a few million a year in revenue, and brought them into the fold and deployed our operating model there. We’re more of a horizontal play, whereas Constellation and other folks that are other software accumulators, they focus on vertical.

Tobias: You guys operate in these businesses when you acquire them?

Michael: Yeah. And that’s where I think we’re able to unlock the value. Over the past 20 years, it’s gotten really easy to build a software business from a technology standpoint. AWS, all the toolsets, all the libraries, they make it really easy to do that. But what hasn’t gotten any easier is those technologists who build those businesses, it hasn’t gotten any easier for them to operate them. Sales is even harder than it used to be. It’s not like you can just spam the world or by display ads and hope your customers are going to magically walk in. The insight there is, because we’re operators and my cofounder, Paul, he used to run all of Rackspace’s support, he understands how to run teams. What we do is we bring these businesses in and they all need some work and we deploy our operational excellence into them, and then turn them into nice little businesses that we keep and grow forever.

Michael: Yeah. Vertical software is typically focused on a specific industry. Constellation, which is a great business– they have a whole B to G department or B to G division, or they may have a healthcare division, which is just software that aims at healthcare type of that industry. That could be anything from practice management software to benefits management to any of that kind of stuff. So, they focus there, and that’s fine. Our horizontal play realizes that in the vast world of software, there are a bunch of things that are horizontal across all these industries that aren’t specific to one, but have a common use case that you’ll see across all of those.

Michael: Yeah. For a hyper-niche example, let’s say you have compliance software that automatically scans all your financial statements to make sure that you’re compliant with stuff. That would be a very hyper-niche type use case or what I talked about before, everybody needs kiosks or these large-scale digital signage deployments. Our product, Moki, which is device management for those type of deployments, that is a very narrow thing that spans across industries. That’s where the horizontal thing is, it goes across multiple industries.

Tobias: Is that what Brent Beshore describes as “the tastes like chicken” layer of business, is that what you’re trying to?

Michael: For sure, yeah, but we’re interested in the wishbone part that’s unique to a chicken because then you don’t ever have to worry about, is Google going to come in and crush you. Because we’re not going out-engineer them and that’s not really the intention anyway.

Tobias: So, when did you start up? And what was the plan when you got going?

Michael: Yeah. We started about two years ago now. I think the original plan was, let’s create a set of incremental experiments that we’re gonna run in the market, and really try to understand is there something here? And I’m a huge believer– whenever you are going to ask other people to eventually buy into what you’re doing, the best thing you can do is put your own capital to work, or at least at a meaningful level. What Paul and I did, and we had gotten introduced by a great guy here in San Antonio, a man named Graham Weston who’s like the former chairman of Rackspace, kind of the godfather of the tech scene here, as big as it is. And he said, “Hey, Girdley, you need to meet this guy, Paul.” And we went and had lunch and I was like, “Hey, I’m working on a project. I think there’s a business opportunity around these hyper-niche software companies. Do you wanna work on it with me?” He and I just were like, “Okay, you have some money, I have some money. Let’s go out and commit it and buy one and see if it works.” And so, we spent about six months trying to find one, and ended up buying the first one called Moki.

Tobias: What makes it hyper-niche?

Michael: Yeah, so we define that as a whole set of characteristics there. So, first of all, it’s mission critical, meaning that we don’t wanna buy anything that’s gonna go away during a recession. Second of all, we focus only on b2b software. We’re not interested in b2c. It’s not that those aren’t good businesses, I find them very boring. Maybe I’d be a better capital allocator if I wasn’t so emotional about certain things, but I’m not interested in working on boring stuff. Second of all, it’s a very narrow use case, that we see that it spans multiple industries. It’s not something that’s going away. And then lastly, it fits a certain size. We’re not interested in buying into $500 million TAMs, total addressable markets. We are totally happy with being the number one software vendor in an $8 million TAM. And there’s some logic to that because $8 million TAMs aren’t interesting to PE, they’re interesting to VCs and they sure as heck are interesting to the big boys.

Tobias: How are you determining that the TAM is only $8 million? Is it literally like a geographical location? How does it work?

Michael: Sometimes, it’s really easy. You can do things like– we’ve looked at software that specifically only sells to education departments at US states. You can figure that out pretty easily. The second acquisition we did is actually back office email automation software for maritime shippers, and specifically maritime shippers that ship bulk stuff, not container shippers. So, it’s pretty easy to figure out the TAM, when you know there’s only 85 customers in the whole world and the potential spend for each one is whatever. That’s multiplication, even I could do that.

Tobias: How did you undertake that first acquisition? How did you look for it? How did you validate it, assess it when you got it? Can you just walk through that process?

Michael: Yeah. Well, what we did early on was pretty straightforward. We did list building. I hired some dudes on Upwork to build a list of companies. Anybody that’s built a sales machine, that’s pretty standard. I got a list of about 5,000 companies, and we just started going through them one at a time. Doing emails and saying, “Hey, I looked at your company, it looks interesting. Are you interested in selling?” I would do probably 50 to 75 of those a day. And then, based on that, we would just run people through a sales funnel.

An inverse– what any acquirer does. Use some email automation stuff to do those emails, those returning introductory calls. And those early introductory calls are really interesting because at the time, we’re trying to figure out what the market is. And those early calls, I think, are really interesting because after the fifth one where I ended up talking to a seller and I discovered there’s this vein of people who will sell but only for a crazy price, well, I’m not interested in buying anything for a crazy price. So, then we start to move people after those introductory calls through the rest of the process.