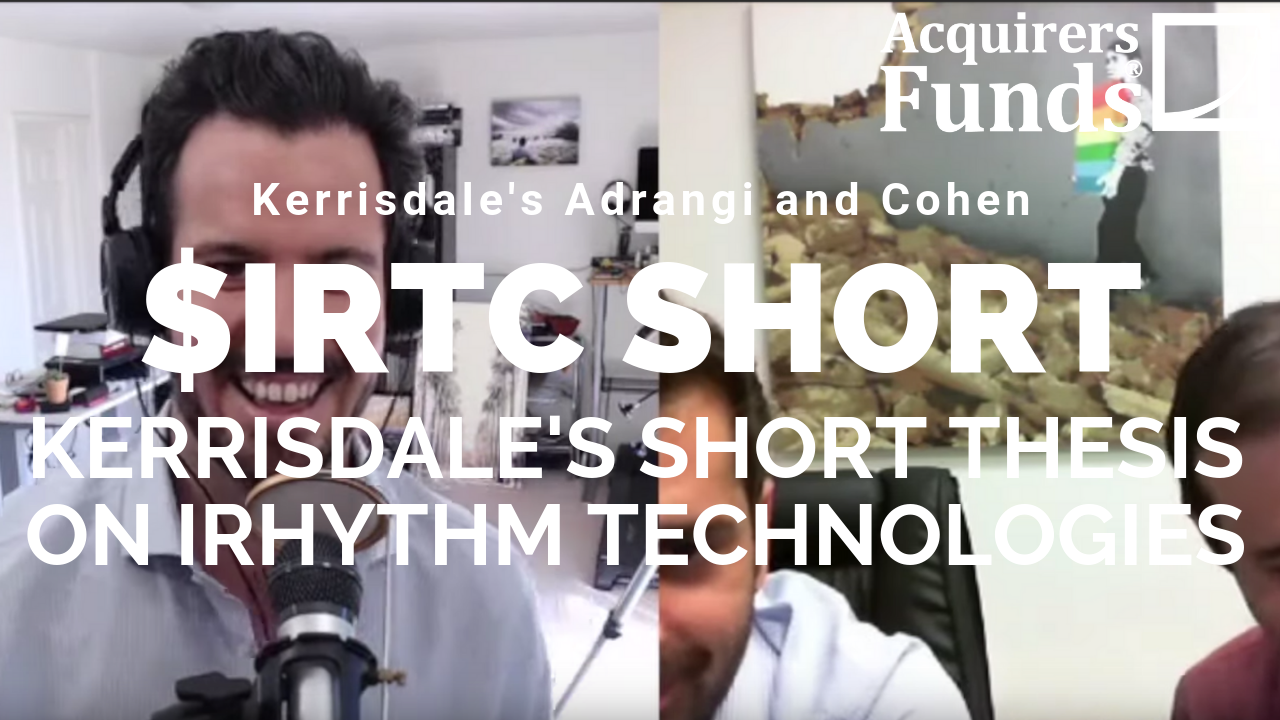 In this episode of Acquirer’s Active Tobias chats with Sahm Adrangi and David Cohen of Kerrisdale Capital about their short thesis on Irhythm Technologies Inc (NASDAQ: IRTC).

During the interview they provided some great insights into why their firm has taken a short position in iRhythm Technologies Inc, which include:

– Anticipated Revenue Cut In The Order Of 50%

Disclosure: As of the publication date of this report, Tobias Carlisle, Acquirers Funds LLC and its affiliates (collectively “Acquirers”) and guests (collectively, the “Investors”) have short positions in and may own options on the stock of the company covered herein and stand to realize gains in the event that the price of the stock.

Tobias Carlisle: Let’s get under way. Hi, I’m Tobias Carlisle. This is The Acquirers podcast. This is a new initiative called Acquirers Active. We talk to high conviction investors, concentrated longs, activists and short sellers. First conversation in our new series is with Sahm Adrangi of Kerrisdale Capital.

Speaker 2: Tobias Carlisle is the founder of Principle of Acquirers Funds. For regulatory reasons, he will not discuss any of the Acquirers funds on this podcast. All opinions expressed by podcast participants are solely their own. They do not reflect the opinions of acquirers funds or affiliates. For more information, visit www.acquirersfunds.com

Tobias Carlisle: Sahm and I have known each other-

Sahm Adrangi: This is our first conversation. That’s a lot of pressure on us.

Tobias Carlisle: I feel like it’s someone I’ve spoken to. We’ve both been looking at net nets ten years ago. Surprisingly. Shocking, that that was the first email that went between us was sometime in 2009. The position we’re going to discuss today is iRhythm. The ticker is I-R-T-C. It’s one that, in the interest of full disclosure, my family is also short. And he’s joined by David Cohen. Could you take us through the business of iRhythm and your thesis?

Sahm Adrangi: Sure. So, iRhythm operates in the cardiac monitoring space. I think if you go back, ten, twenty years ago, in order to diagnose irregular arrhythmias, doctors would take patients and they’d put what was called a traditional holter system. Essentially, these holters, they were these clunky patchwork of wires and nodes that a patient would wear over the course of 48 hours. And during those 48 hours they would be diagnosed. The machine or medical device would read the arrhythmias and the doctor would, then, take the results and put out the right diagnosis.

Sahm Adrangi: Where the problems there was that, this was a very bulky contraption. You couldn’t exercise with it. You couldn’t shower with it. A lot of patients would want to remove them. And so, iRhythm was the first company that came up with the concept of a much smaller patch that patients would wear in order to not have to deal with the bulkiness of the traditional holter.

Sahm Adrangi: And over past few years, this has continued to get dramatic support among doctors and cardiologists and it’s now become the standard of care in many cases in order to detect arrhythmias.

Sahm Adrangi: The reason we short iRhythm is just simple that they’re getting paid too much under the reimbursement regime. So, initially, when a medical device companies come up with new devices, they get an experimental temporary code. The rationale behind that is that the government can’t go around doing surveys among these doctors to come out with an appropriate pricing schedule for every new medical device that comes onto the scene.

Sahm Adrangi: That over time, to the extent that a device such as iRhythm Zio Patch, gets widespread support. There’s a transition from these temporary codes to permanent codes and often times when that occurs to the extent that temporary codes have been too high because the company has really gained the system originally in terms of picking the right contractor or canvasing a number of CMS contractors for pricing and then putting it center in one state with the contract that provides the highest pricing.

Sahm Adrangi: Ultimately when you go through a temporary go to a permanent code that all goes away and your pricing comes more into line with a variety of variables that in many cases just results in lower permanent pricing codes. Well tips to the temporary pricing codes, but, you know the medical device company, how it originates. And you think this is the case with iRhythm, it’s happened with other businesses and when that occurs, this is a single product medical device company. It’s really the Zio patch that drives this revenue and when you see that transition from temporary to permanent, you get a dramatic reduction in pricing.

Sahm Adrangi: This is also a business that’s just not profitable right now. And so, just from an evaluation perspective, it’s not worth 1 1/2, 2 billion dollars. You know, us trading is worth a lot less than that in our mind.

Tobias Carlisle: What’s the competition like in that industry?

Sahm Adrangi: Yeah, so, competition’s heating up. Right now the Zio patch is this close to 100% market share. That’s starting to go away. As competitors have been gaining steam over the past year or two. But within the cardiac monitoring cash space, the Zio has been the dominant player.

Sahm Adrangi: But there’s no real IP protection around what it does. From conversations with other industry experts I think it’s been very possible for all the competitors to come up with competitive products that essentially do the same thing.

Sahm Adrangi: Particularly, Bodi Diagnostics, which is founded by a bit of a legend in the cardiac monitoring space, has come up with a very competitive patch that is continuing getting market share and winning awards left and right. Yeah, we’re not saying this so that Bodi’s going to come out and take over the market from the Zio, but to the extent, totally get 10, 30, 40 percent of the market. That’s a competitive threat that compounds the problems that the Zio’s facing on the reimbursement side.

Tobias Carlisle: So, when do you see the reimbursement issues impacting the company and what impact do you think that that will have?

Tobias Carlisle: So, they released earnings yesterday, I think. And today, looks like they had pretty healthy revenue growth, but the problem, it looks like from my perspective, is the 2 billion dollar market capitalization company trading it. Something in the order of 10 times plus sales on their forecasted revenues of 212 for the full year. Where do you see the valuation? And how long do you think it will take to play out?

Sahm Adrangi: Yeah, so, we think that there are revenue cut can be in order of 50%. Currently the Nobita’s contract or CMS contractor that accounts for the vast majority of the Zio revenue. Then on the order of 300 dollars per-

Sahm Adrangi: Per procedure and we think that can go down based on the things that go into assessing what a permanent approach should look like and that can go around to 150 bucks. At its current scale, the Zio’s not profitable or iRhythm is not profitable. It will lead to reimbursement with a cut of potentially 50% and we’re now around at least 30%. It just doesn’t justify a true dollar evaluation for this business.

Tobias Carlisle: So, the stock price today… just blanking for the moment. What does it say?

David Cohen: It’s okay. I think the last trade before this conversation was around $83.00.

Tobias Carlisle: And so, you see it somewhere in the forties.

Tobias Carlisle: By the time this is all said and done.

Sahm Adrangi: I think that’s totally fair. And that’s still close to a $1 Billion market cap for a business that over the course of our research we got decisive that other players just have decided look at this space and ultimately, they looked past what the industry is going to look like when you transition to a permanent code. And I think a lot of lot what our players just viewed is a very low margin business down the line.

Sahm Adrangi: So, I’m not sure a billion dollar market cap is justified ultimately. But that’s still 50% below where it’s currently trading.

Tobias Carlisle: Just to sum up, gents. Is there anything else you’d like to add?

David Cohen: No, I think, in general, the earnings story has been the beat and raise, beat and raise and they’re pretty good about it if you look at the details in the Q’s, you see that where the beat and raises doesn’t seem like they’ve come from volume growth. It seems like they’ve come from pricing more and more. The revenue growth is coming from third party payers as opposed to Medicare. They charge third party commercial payers about 2-3 times what they would charge Medicare, so you can already see the volume growth is decelerating and they’re making it up on pricing by getting third party payers. That’s got to come to an end at some point.

David Cohen: And you can already see, just today, the beat and raise has been faded by the market. So, we don’t really consider that something sustainable. As the story comes to its conclusion, we think the ruck maybe will probably decide on reimbursement of this. The reimbursement rate around January time. That’s when we’ll get further clarity as to what the sustainable revenue stream and business will be.

Tobias Carlisle: Thanks very much, David Cohen and Sahm Adrangi of Kerrisdale Capital on iRhythm and the ticker’s I-R-T-C. Thanks, gents.