Some years ago, Michael Mauboussin wrote a paper titled Animating Mr Market, in which he discussed Ben Graham’s Mr Market metaphor saying, “One way to animate Mr. Market is to consider the wisdom of crowds. What’s key is that crowds are wise under some conditions and mad when any of those conditions are violated.” Here’s an excerpt from the paper:

Now let us turn to the final part of the discussion, which is how to use Mr. Market to your benefit. And we don’t think you can do better than a line that Seth Klarman, founder of The Baupost Group, shared in 2008: “Value investing is at its core the marriage of a contrarian streak and a calculator.”

There are two parts to this message, as we interpret it. The first is to be a contrarian. This is fully consistent with everything we have been discussing. As Warren Buffett has said, “Be fearful when others are greedy, and be greedy when others are fearful.”

So the second part of the message is equally crucial. The calculator allows you to assess whether the expectations, as reflected in the price, are out of sync with the fundamentals, a reasonable sense of a company’s future financial results.

Klarman grew up near the Pimlico horse race track in Baltimore, Maryland, and spent a lot of time there as a kid. Horse racing is a useful metaphor to make the point about expectations and fundamentals.

In the U.S., winning the Triple Crown puts a horse in the pantheon of racing. It’s difficult to do because it entails three races (Kentucky Derby, Preakness Stakes, Belmont Stakes), over three different distances (1.25, 1.1875, and 1.5 miles) all in just five weeks. In the summer of 2014, a beautiful colt named California Chrome came along. He had won 6 of the 10 races he had run prior to the Kentucky Derby and had won 4 in a row leading up to the first leg.

California Chrome won the Kentucky Derby by 1 ¾ lengths and went on to win the Preakness by 1 ½ lengths. This put him just one win away from horse racing immortality.

In this case, Mr. Market is the collection of pari-mutuel bettors. Triple Crown contenders are like shiny, sexy growth stocks. Everyone wants to bet on them. Naturally, the horse’s handlers were also very bullish on his prospects and were not afraid to share their views with the public. The handicappers were bullish as well, as California Chrome went off at 3-to-5 odds. Those odds suggest a 62.5 percent chance of winning the race.

As a value investor unaffected by the price, you would want to understand whether that probability was a fair representation of the horse’s prospects. In other words, would the fundamentals live up to the expectations? There are a couple of ways to look at this.

First is the base rate of success. Since 1875 there have been 30 horses in a position to win the Triple Crown, but only 11 achieved the feat. That’s a 37 percent success rate. But there was a marked difference before and after 1950: Before 1950, 8 of the 9 horses that tried were victorious, close to a 90 percent rate. But after 1950 only 3 of 21 won, less than a 15 percent success rate, and none have succeeded since Affirmed did so in 1978. So the 62.5 percent probability sounds a bit rich based on the last 65 years of results.

A reasonable thought is that California Chrome’s speed justified his odds. There is a way we can measure that. It’s called a Beyer Speed Figure and measures a horse’s performance adjusted for track conditions. The details are not important; all you really need to know is higher speed figures equal faster horses. Exhibit 7 shows the last eight Triple Crown aspirants, including California Chrome, and you can see that he’s the slowest of the lot. 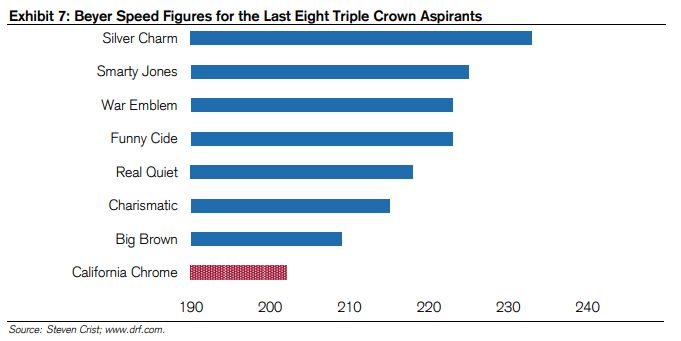 So we now have two fundamental indicators. We have a base rate of low success and a horse that is not particularly fast trying to achieve the feat. In this case, Mr. Market is much too optimistic and you should sell. Indeed, California Chrome finished in 4th place in the Belmont Stakes, disappointing more than 100,000 fans who came to see history made.

It turns out that overinflated odds are common with Triple Crown contenders. Exhibit 8 shows the same eight horses along with their implied probability of winning and their actual finish. Almost all of these horses were among the favorites, but their odds were consistently too optimistic. 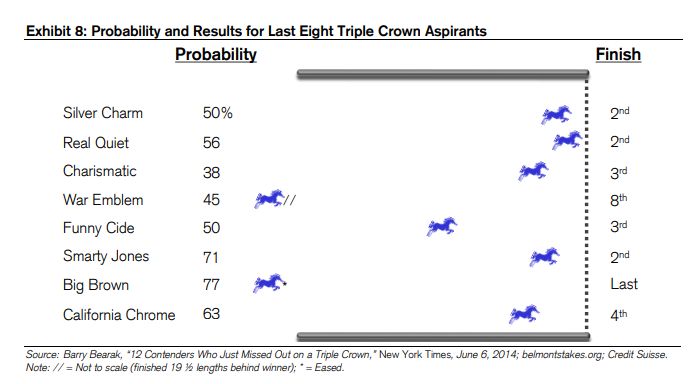 In this case, the contrarian streak would say “examine betting against the favorite” and the calculator would tell you that the odds overstate the probability of winning.

Horse racing is much simpler than investing because the expectations are explicit and the race reveals the winner. In the stock market, you have to reverse-engineer expectations from stock prices and the market is essentially perpetual. But the mindset remains the same.