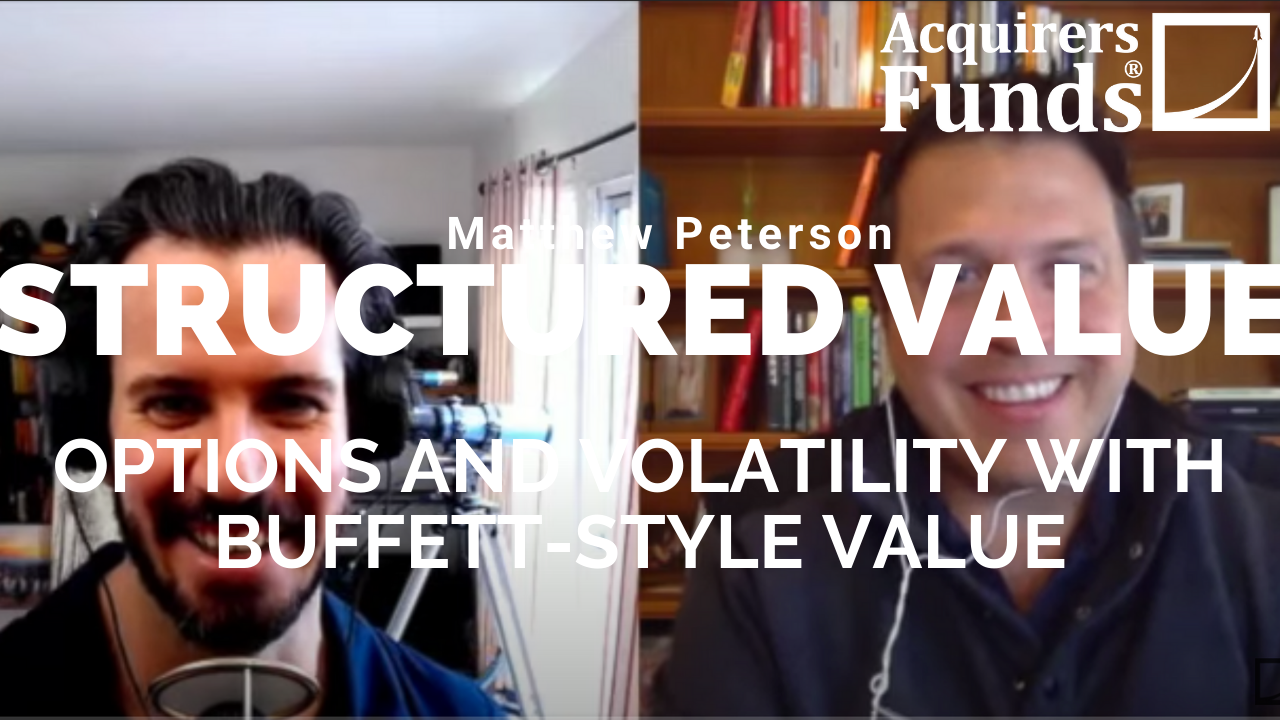 Matthew: Okay, well, let’s start. So fundamentally, we’re a long-term value-based fund. All of the standard protocols you would affiliate with a value fund, you would affiliate with our fund. But what I think you’re referring to is the small nuance where we sort of buy and sell in a little bit of a different manner than, I think, most traditional funds, and it’s an enormous advantage. I spent a lot of years only talking about it very privately because I was afraid that if I went public, it would get exploited. But what I’ve discovered, actually, is that very few people– people are reluctant sort of to put it into practice, and there’s a couple extra steps, but out of all your listeners, there might be a few that go out and try it. And there will be a few that stick with it.

What we do, essentially, is once we discover, and we can walk through a process or whatever, but once we identify a company that we’d like to own, and we have a very concentrated portfolio, so we’re talking like, maybe 10 positions is a good amount. When we find a new position we’d like to buy, I want to figure out the best way to acquire that exposure. And so, what I discovered years ago on Wall Street, is that by basically selling a put, a lot of times in the value space, when you want to buy a firm, it’s fallen out of favor, maybe there has been an event that’s caused the price to decline into a place where you’d like to own it, oftentimes, it’s high volatility. And high volatility impacts the prices of put and call contracts. Most people are somewhat familiar with puts and calls.

Call allows you to buy the shares, put usually allows you to sell the shares. But if you invert it, and basically, instead of being the buyer of a put, you become the seller of a put, people are paying you to protect their shares. And should the shares decline in price further, they then put them to you into your portfolio. And so, it’s just one extra step. So, instead of going to the New York Stock Exchange and buying, say, shares of whatever we want to own– unfortunately, I didn’t check recently. But Tesla is always a good example, because it’s so volatile. But instead of buying– Toby, do you know what the prices today of, say, Tesla?

Matthew: Yeah, let’s say it’s 400, you could likely go in through the Chicago Board of exchange, instead of paying $400 for it, commit to buying it for $400, over a period of nine months or so, and someone’s likely to pay you about $100 for that commitment. And so, what happens in the scenario is, instead of buying through New York Stock Exchange, we go through Chicago Board of exchange, we write these put contracts, we’re committed to buying the shares. They are priced, basically, through quantitative assessment, there is no qualitative assessment, that’s underlying the Black Scholes model, for example. And so, we pick up a large premium and we use this as a tool to own the equity. So, we’re not just trying to pick up premium, we’re not picking up nickels in front of a crusher, whatever the analogy is, but we’re basically looking for an opportunity to buy shares and looking to move in as cost-effectively as possible and as cheaply as possible.

And so, this allows us by writing these puts, it allows us to pick up a premium before we buy. And then when we do buy, we’re paying far less than the market price for the securities and that’s a huge advantage because it lowers the denominator throughout the entire holding process then of the position.

Tobias: Let’s look at one of those transactions. When you sell a put to get into a position, you have the same downside profile as someone who has bought the stock. So, if you’re a value guy, and you’re already prepared to underwrite this particular stock, you’re already prepared to accept the downside of something that you’re buying into. What you’re saying is by selling a put and capturing hot, a lot of volatility, you’re in fact getting a lower purchase price in the event that the stock falls that point. Even if it falls to your strike, you’ve got some premium embedded in it that you’ve paid an even lower price than that. So really, the risk for you is that, it’s a sin of omission where it’s something that you want to own and it never falls the price where you in fact get it put to you and you get to buy it. Is that fair?

Matthew: That’s absolutely fair, that’s absolutely correct, and that is very much the way I look at it. So, if we took a really basic example, like, Berkshire Hathaway, which everybody’s very familiar with, and it’s not the best example, by the way, because volatility is not usually very high with Berkshire. But we can talk to it easily and all the nuances, but there’s basically four outcomes to any scenario. So, once you sell the put, the worst outcome, of course, is that the shares go to zero. And like you said, it’s the same position you’d have if you are a value fund owning the securities. Of course, it would be terrible for it to zero. Berkshire B shares, I think, are around 210 or so. If that went all the way to zero and you hadn’t sold a put, you would lose $210. Maybe if you sold the put with a strike of 200 and you picked up $20, you’d lose $180. So, it protects you a little bit.

The second scenario is the ideal scenario. And that is where you want to own a security for the long term, you’re using this put process, this cash-secured put as a tool to own the shares, the shares dip a bit, they get put into your portfolio, you’ve captured the premium, and now you own Berkshire at $180, the shares maybe went into the $190s and now they’re at $300. And you’re looking and feeling great.

The third scenario is also reasonably attractive. Basically, shares don’t decline much, maybe they’re flat, maybe they’re up just a little bit, but you’ve picked up enough premium that you’ve sort of offset the waiting period. Maybe the security is probably theirs– they may still be very attractive, maybe more attractive. But once these contracts expire, you obviously keep the premium and you just go about your business so you could resell more contracts. So, the third scenario is the shares stay flat or go up a little bit.

And then, the fourth scenario that you describe is the worst scenario, where– although it feels painful for us, but it’s not like LPs or other folks complain, because it looks like the third scenario to them. So, the shares rally, you missed a multi-bagger position and you’re back to the drawing board, you have to find a brand-new idea, and you’re totally right, but you missed it. And so that is the risk, that is the real risk.

Tobias: Do you buy the equity at the same time to sort of mitigate that risk a little?

Matthew: These are great questions. We can go into depth on some of this. There’s a few things that you can do. In fact, my approach has evolved a bit over time naturally as you get more experience and so typically, — let me put this framework around it. We’re such long-term holders that we may wouldn’t– I like looking at things a decade out or so. And I would love to own compounders that continue to grow at high double-digit rates for that a period of time, very happy to own securities that way. So, what that means is, typically, initially, I don’t, to answer your question, I just sell the puts. And that’s usually the approach that we take. Sometimes, if it looks like maybe there’s a lot of operating leverage, and it’s really going to move quickly, or there’s some sort of catalyst that’s changing things fast, you can– and this is a step further, so I don’t want to really confuse your audience. But I have and you can take a small piece of that premium and buy some out of the money calls so that if it truly rallies, you do capture that upside. It actually becomes in a way like a free call option, if it’s done well.

I tend to do that more than buying the shares, but ultimately what happens is you own the stock. And once you own the shares, it becomes quite interesting what you can do, because you’ve become so familiar with the security, when it dips, you can buy, sell some puts. If it rallies, you might be able to sell some calls. And if those have the same expiration dates, the price can only be in one place on that final date. And so, you can start kind of capturing multiple premiums around a long-term position that you hold.