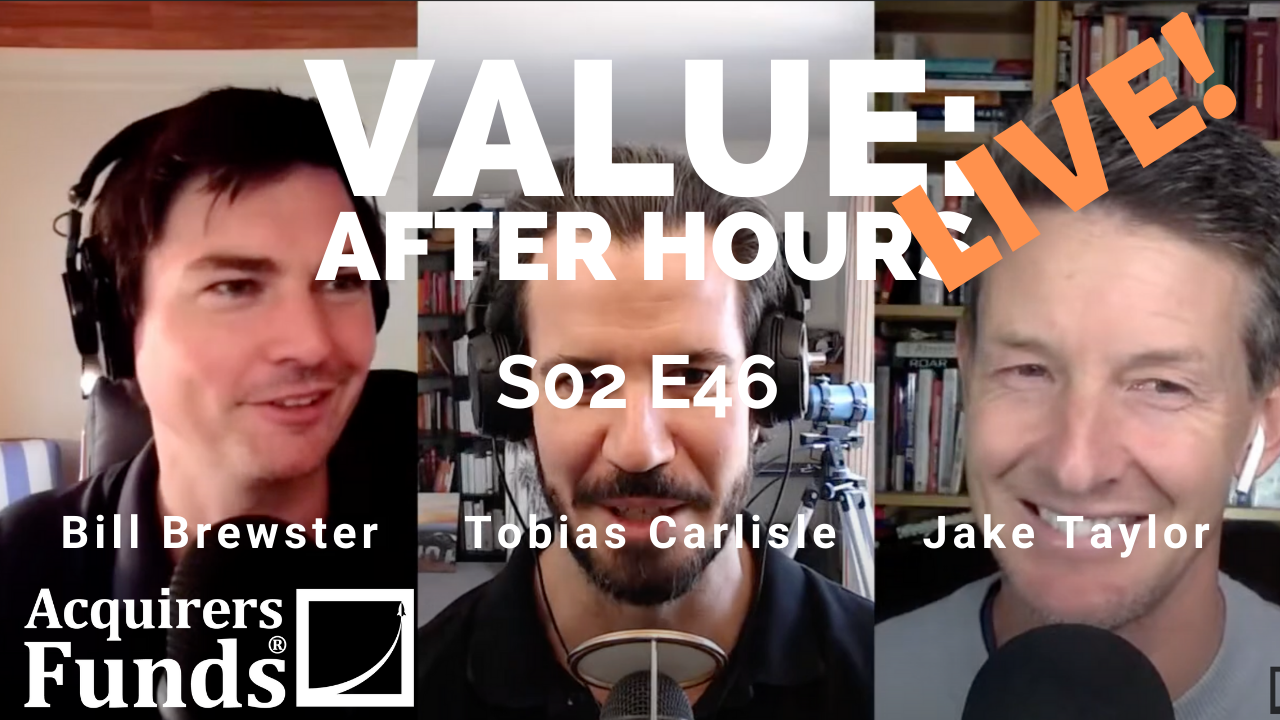 During their recent episode of the VALUE: After Hours Podcast, Taylor, Brewster, and Carlisle discussed Buffett Sells $COST. Here’s an excerpt from the episode:

Tobias: I thought everybody’s complaining about– I thought we were complaining last week, in fact, that he hadn’t bought even though he’s got Costco’s biggest cheerleader as his business partner.

Bill: I know. Well, I think now you got a little bit of a different situation because, I guess you’re somewhat saturated in the US. I’m sure they can still open a couple more, but open more boxes here is probably less of a potential. It’s got to be a China story, which when they opened up that China store, that was crazy. That was like a rock concert. But I guess if you’re looking at it, and you’re him, and he’s probably doing much more advanced calculations than I am, but free cash flow yield on the equity is maybe 3%. I figure it grows like 5% or 6%. What’s the probability of some multiple fade between now and perpetuity?

Jake: We’re back to flat.

Bill: They just go up. [crosstalk]

Tobias: Unless they’re value stocks, in which case they contract.

Bill: That’s true. Yes, there is multiple momentum for sure.

Jake: It’s a ratchet. It just only goes up one way and stops and then keeps going.

Tobias: I pulled up the chart for– I can’t remember– it might have been. I’m going to get this stock wrong.

Bill: But don’t you think that’s what he’s thinking before we get too far off it? I mean, he’s probably thinking they’re like, “All right, so I probably get somewhere between a 5% and 10% return. Maybe in a good side, I get 12. Can cash do a lot better for me?” That’s how I’d think about it, I think.

Tobias: You think he’s getting as much return then?

Tobias: You think there’s that much return in Costco from here? [crosstalk]

Tobias: Either 12 is what I heard.

Bill: No, I said– Look, here’s a way. You know that I’m in Team Melt-Up. I mean, I think things could go nuts. Maybe the 50 P/E is the new rates are at zero, bro. So, where else are you going to go? And 50 P/E is where everything trades. I don’t see why it’s not possible.

Tobias: But aren’t we fundamental investors, aren’t we–?

Jake: Narrator, it was already– [crosstalk]

Tobias: [laughs] Aren’t we buying the flows? Buying the divis in the reinvestment?

Tobias: Multiple expansion is the–

Jake: Well, I think your logic is sound for why he would say he’s not buying more, but why sell at this point?

Bill: I don’t know. You know, Charlie was like, “Come on,” at everything?

Jake: Right. You’ve got all this stuff, that’s what you’re going to punch out of?

Bill: Yeah, you’re going to keep that Wells exposure? Can’t you just get rid of that if you need the cash?

Jake: Well, Charlie’s not saying that because look at the Daily Journal Portfolio.

Tobias: Kevin Zatloukal come through with the details for us. He says 42 P/E, 39 forward P/E. Have to project the analysts expected earnings growth forward over 18 years to justify the valuation.

Tobias: He’ll probably going to get another bite of that cherry, little bit lower.

Tobias: Yeah, why sell it? Was it his? Was it one of the boys?

Jake: I think that was his, but I don’t know for sure.

Bill: That’s a decent question. It’s interesting. You see those guys making moves like this in the never-sell era.

Jake: Yeah. So, what does that mean for never sell?

Bill: Well, I think never sell may make sense as a strategy for certain people. It’s not the one I’m comfortable with.

Tobias: I think there’s a lot to be said for never sell, but if you’re looking to– It’s hard. If you’re looking to maximize the pretax returns, never sell, it’s probably not the best way to do it. If you’re looking for like a calmer, longer life, maybe, maybe never sell is a good way of doing it. You just wait for good things to get cheap. Then, take your opportunity and then just coffee-can it, never look at it again. And your plan is in 10 years’ time, I’ll be getting the dividends out of it. But in the interim, I’m not going to think about it.

Bill: Yeah, I mean, I guess I’d rather own Costco than the ten year.

Bill: I’d still take Costco at a discount to the ten year out of the gate, but to your point, the ten year is not your only opportunity cost.

Tobias: Ten year is running up a little bit too.

Bill: It will happen.

Jake: We can’t have that.

Tobias: No. Could someone get BOJ on the phone and see if they can tell us what to do?