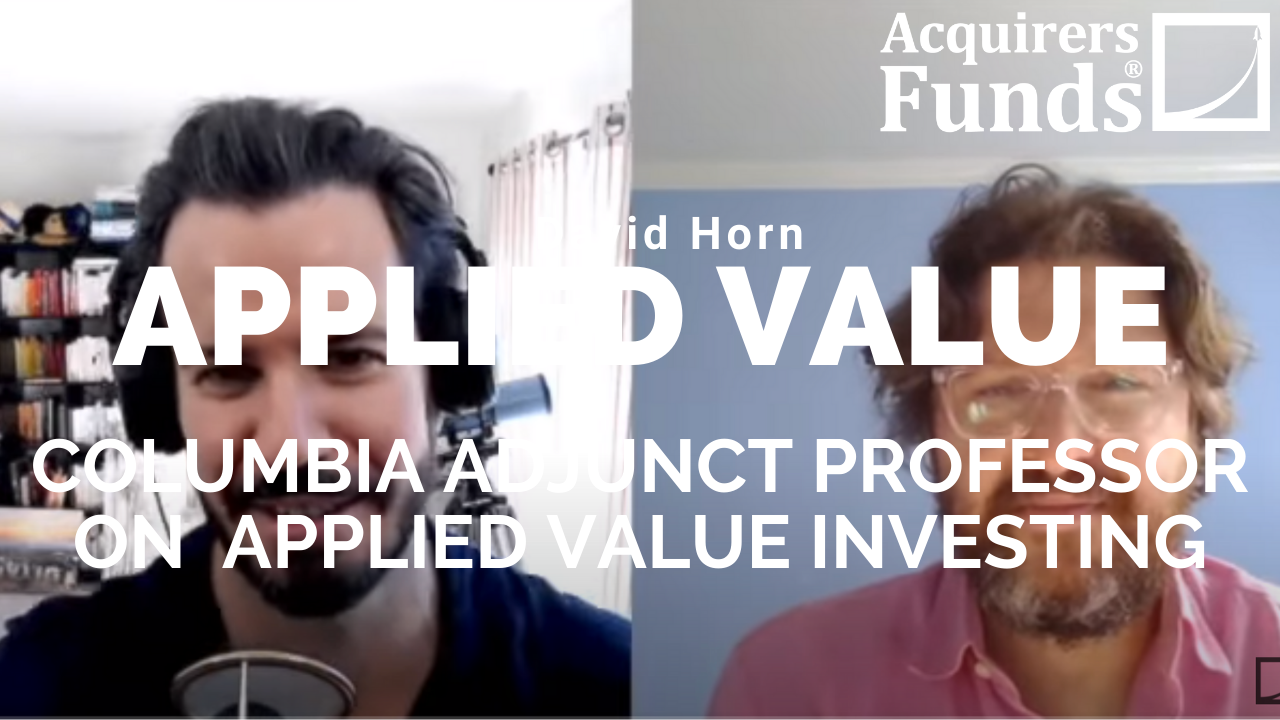 During his recent interview with Tobias, David Horn, Adjunct Professor of Applied Value Investing at Columbia Business School, discussed Greenwald – “We Didn’t Get Growth Right!”. Here’s an excerpt from the interview:

David: Yeah, we touch on it. But even Greenwald has said, “We didn’t really get growth right, and we’re working on that.”

Tobias: I liked that. Greenwald’s got that methodology where he says, you look at the steady state and you look at the flows from that, which might be the dividends and any buyback yield, and then you’ve got the growth portion, which is basically what you’re reinvesting by your return on invested capital over, whatever your discount rate is. And so, you get some idea, you’re explicitly breaking it into two parts. One is the steady state where you’re getting dividend or the buyback. And then, you’re thinking separately about how it’s growing. And that looks at what you’re reinvesting, the likely return internally to the company. And then, how much cash– from where that’s being priced in the market. That’s Greenwald’s franchise value as far as I can recall. And the nice thing is it breaks into two. And so, you have that thought. It also doesn’t rely on any movement in the multiple for you to figure out where your return is going to come from.

David: Yeah, he talks also about use– break down the balance sheet, you break down earnings power value, and then you look to see if they’re over-earning or under-earning, and I think that’s valuable if you want to be an activist. Look, I think so much of what’s happened is that breaking down the balance sheet, look, it’s very important to understand the balance sheet, but buying it something at a discount to liquidation value is not available too much these days. We like to touch on it, but we segue a little bit from it because we want them to think– once you do the balance sheet work, I don’t think too much of the further work is going to be, oh– again, I’m buying it at a discount to its balance sheet, although understanding how the earnings are working in relation to return on assets, and whether or not this is a good business, those sorts of things do matter.

So, going back to, you said, what are you teaching? It’s not a heavy security analysis class, because what I’m trying to do is expose them to things that they are going to — it’s like the question they ask, “What’s the right sizing?” “What’s your behavior?” “What’s the behavior of that of your LPs?” Anyone will tell you that that your best chance of outperformance is concentration. It’s probably your best chance of blowing up. Look, if you own 500 stocks [crosstalk] and you’re not going to look different than the index. Okay, well, where do I want to fit in? What’s my–? And there’s great funds that are able to own a handful of stocks. But there isn’t a right answer. And look, if you own a couple stocks, don’t blow it. The hurdle– This also goes back to– you sort of thinking about batting average and slugging percentage, and even Soros I think, would say that he was actually wrong more than he was right. But he’s sizing and the magnitude of– The old adage is like, “Well, 90% of options expire out of the money.” But if the other 10% are up 11-fold, then I guess you should buy options?

Tobias: I’ve heard that before that Greenwald felt that he didn’t get growth right in the Graham to Buffett and Beyond book and I thought that the more recent– there are a few papers floating around where he talks about this other method that they use is that I think is quite effective because it doesn’t require any– you don’t need to assume– it’s different from a DCF, where you have the gigantic terminal value that basically opaque, so you have no view into– is this thing going to grow faster than GDP for perpetuity? I have no idea at all. I think that’s an impossible decision to make, but the growth portion where you can say, look, this thing, currently it is earning more than the average company in the S&P 500. You can see how much it’s reinvesting. So, you’ve got some idea that there are flows going back into this thing. It seems to have a reinvestment runway. We get an idea about the cash flows that in totality with the going in, so we can come up with a rough estimate.

And then, the number that it spits out is basically an expected return. And so, you’re not really coming up with a hard, intrinsic value. Rather, you’re coming at it more like a Mauboussin approach where– look this thing, the expected return is very, very high here. So, maybe we should be allocating a little bit more capital to this thing.

David: Yeah, and I think that in the framework– it’s funny watching, and Bruce– I think he retired, but he’s still doing some work, and I think he’s working on another volume. I think what’s happening– So, if you go and read that book, they don’t dig too much into growth. Historically, value mean— that wasn’t part of the work because it’s the whole– the upside is free. And I think he did it– well, Buffett did it stealthily. He started buying quality, but it didn’t really become– I don’t know, when that mantra started to take over.

But I think what you find is that– Look, value used to be contrarian. How many people go to Omaha every year? And so, when you talk about high screen low price to book, should it work or doesn’t work? Well, should it work? How many people are screaming low price to book? Or does it not work simply because something doesn’t work for five years, and then that just works, right? It’s literally everyone, you even get the value guys that decide that this doesn’t work because I don’t have long enough capital. And so, we all move to where the ball is as opposed to where it’s going. And starting to ask this question more about quality of business and growth– It’s something that, I think, they’re starting to probe a little bit more. And again, when I talked to Greenwald about it, he said we’re working on a better framework for growth.

Tobias: I just wondered if that was the one that he’d been talking about because I had seen that. I think it’s intuitive, it’s good for– The thing that I like about it is it doesn’t require look at a decade and try and figure out where it is in a decade. You look at where it is today. All of the inputs are historical. And then, you just seeing what kind of magnitude of expected return are we talking about here.