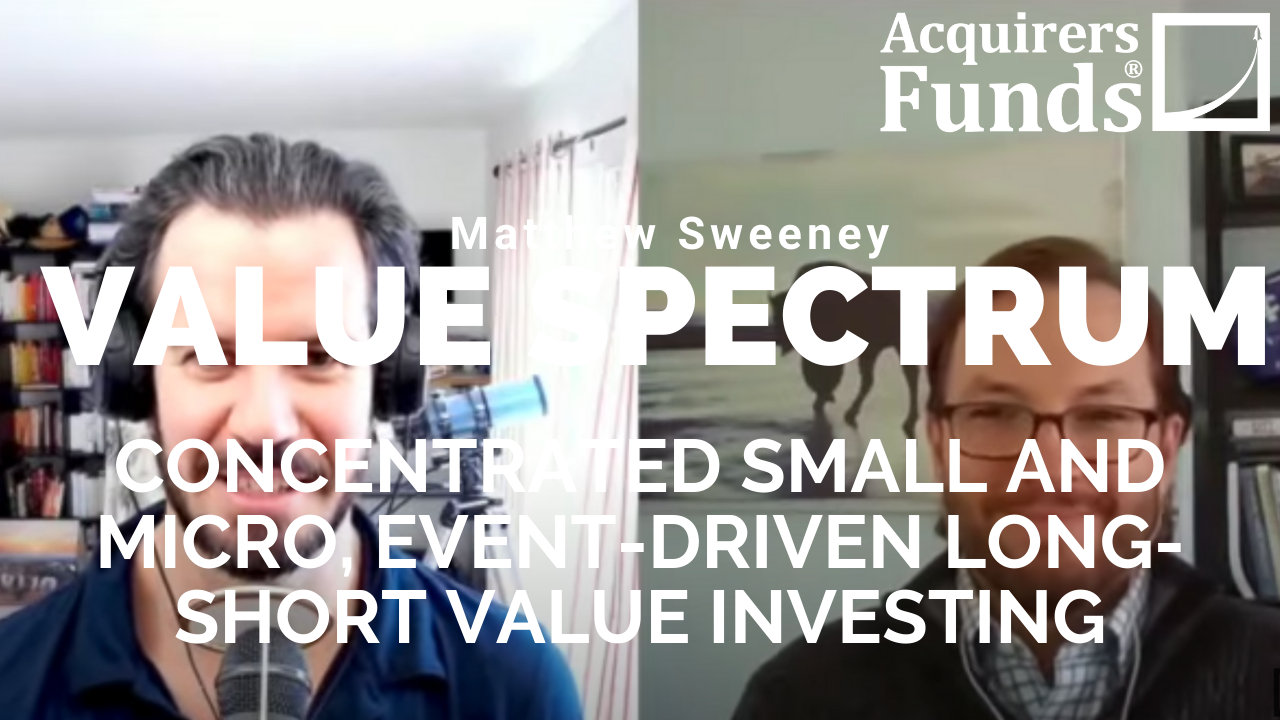 During his recent interview with Tobias, Matthew Sweeney, Managing Partner at Laughing Water Capital, discussed Focusing On Economic Drivers Instead Of Forward Earnings. Here’s an excerpt from the interview:

Matt: It’s really just continuing to sift through the world and find interesting things and be aware that situations pop up every now and again, that are really unusual, the Perelman example is a good one. And you just stay aware that those things are out there, and try to focus on what’s going to be important. And I think it’s interesting, actually against sticking with the Whole Earth Brands example.

I should quickly give credit to Dan Roller at Maran Capital, who I think is someone has spent some time on that, some credit for being associated with that idea. But if you look even on Value Investors Club where there’s a right up there, there’s people in the comment section that are debating, what will EBITDA be in two or three years? How successful will this cost rationalization plan be? What will EBITDA be? That sort of stuff is important, but I look at what Seth Klarman has said about needing to have the ability to make decisions with only 80% of the information because if you wait till you have all the information, the opportunity is probably gone.

So, you can look at it, we could quibble over whether EBITDA in 2021 is going to be 65 million, or 60 million or 70 million. We could quibble, but it doesn’t matter, because you could take the low end of that and haircut it and the stock would still be cheap versus comps. And the most interesting thing is we have a forced seller, you could look at it and say this is a guy that from the original sale price, which Perelman is known as a hard negotiator. The original sale price, we have to assume that he was under some pressure then, but the original sale price was 575 million. And then after everything that’s happened, this SPACing process, the COVID fact, everything else, the shares are available for like $250 million market cap. So, it’s less than half of where Perelman was originally selling it.

The odds are heavily in your favor at that point that even if execution is imperfect, as the story unfolds, as the stock is added to indexes, because it’s not on indexes yet. As Erwin Simon goes out and does this thing. Keep in mind, Erwin Simon, if he formerly ran a $2.5 billion revenue company, he’s intimately familiar with the way the sell-side works. And even though this is now only, I think the market cap right now is called 300 million, even though this is only a $300 million market cap, Erwin Simon has behind him a long track record of doing M&A. And the banks certainly know who he is, because they know he’s been a good customer to him in the past. Now, he could go out and say, “Hey, I am probably going to do some M&A here at some point, but how about some research coverage? All of a sudden, you could have some real banks shining a light on a stock that nobody else is looking at.

I think those sort of factors are more important than deciding if in 2021, EBITDA is going to be 65 million or 60 million. What’s really going to matter here, at least in the near term, is how those dynamics shake out. And how the fact that Ron Perelman was a forced seller kind of develops. Clearly as we go on through the process, we need to re-underwrite and change and check our assumptions. And always try to be updating for the current valuation and stuff like that to see if this has the potential to burn a long-term hold in the portfolio.

I mean, there are situations where this could be a stock that you own for 5 or 10 years. And it’s not crazy to think that if they get the right cost of capital, they could use this as an M&A platform. And it’s interesting to think actually the insiders, their shares from the SPAC are locked up until the stock hits $20 a share. And the stock right now is at eight. So, those are things that could justify a long term hold here. We’re not there yet though, it doesn’t matter.

The $65 million EBITDA on next year or the 60, or 55, or wherever it might be is less important right now. It’ll be more important a year from now. But right now, focusing on those things that are just outside of true economics, they’re just quirks in the world, are the kind of things that can drive performance.