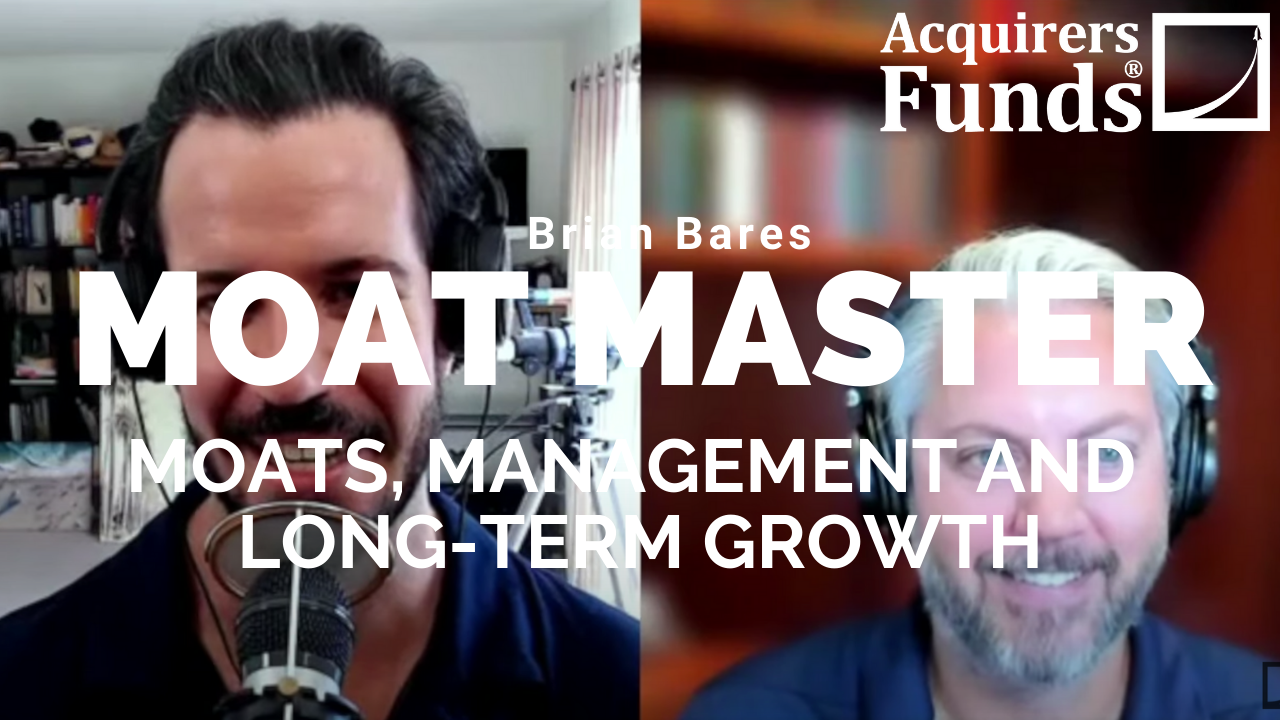 During his recent interview with Tobias, Brian Bares, Founder of Bares Capital Management discussed Wide Moat Companies And How To Find Them. Here’s an excerpt from the interview:

Tobias: Yeah, you slightly foreshadowed where I was going to go next. That was what I wanted to dive into. Let’s talk about competition and moats because I think that that’s possibly the most important part and also the most difficult part of any thesis just for the fact that you’ve got lots of smart people out there trying to break down the moat. What other sort of moats that you look for? What do you like to find in a moat and what do you think that typically received wisdom as being moats, but are probably less moat-y than they appear?

Brian: Yeah, that’s a good question. There’s a lot being written on moats and there are a lot of people that are very smart thinkers on this. What we care about is how long can supernormal economic returns persist? We want to know why that is, how long it can happen, and what could disrupt the applecart. If it falls into one of those Porter’s Five Forces competitive advantage frame. That framework, we have a slide in our deck about Porter’s Five Forces for every single company, and we tease it out. There’s another slide about these more nuanced sources of moat. Lots of technology companies have competitive lock-in and network effects and things like that. So, we obviously prefer seeing that stuff, but I would say, even higher level, all of this falls into just sort of pattern recognition as analysts.

What we’re really trying to do is when we find exceptionalism in economics is to figure out what pattern exists that allows for that to happen. And I think moats fall into that. I think management falls into that. I think runways for growth, reinvestment, M&A to some extent, all of this is just all pattern recognition flowing up to what could allow for exceptional economic returns. We just want to understand that. Our three buckets, moat, management, growth, is an approximate framework for capturing as many of those patterns as possible. It’s not totally comprehensive, but pretty comprehensive.

In the moat bucket, we don’t have a lot to add in terms of the canon. But we’re looking for entire categories of businesses that exhibit just by their very nature moats, and we just tend to shop there. So, there are big swaths of the market which we gravitate to naturally. Information services is a big part of our work. Software is a big part of our work. The SAS model software companies obviously have rich valuations, but they’re incredible business models. They weave their way into your business processes. They’re very hard to kill. They charge you on a monthly basis, as opposed to premise based. You could update the entire code base once and all of your customers benefit. It’s just really, really powerful dynamics. So, we spend a ton of time there and have a lot of exposure there.

We study how businesses get smarter through AI and machine learning. We study through cultural advantages. We’ve made some investments where we just feel like, “Hey, the team of people themselves provide some competitive advantages because of who they are, their background, their history, how they execute, how they structure themselves, how they organize themselves, and self-improve.” There are lots and lots of models here that I think have probably been covered by others as comprehensively as we do. So, I don’t think we have a lot to add to the canon there. I think where we shine is just in the actual boots-on-the-ground reps of actually seeing everything and illuminating what’s actually happening with these companies, and how that could be misunderstood by the market or overlooked.

Just to say Visa and MasterCard have a great moat, of course, that’s obvious to everybody and that sort of thing. But to say that there’s a true network effect there, you have to really study that and get a more nuanced understanding of that and say, “Okay, how can they prevent the rise of Venmo and Cash App and some of these other things? Are the castle walls high enough? For how long can this persist?” And stuff like that. We don’t own either of those two companies. But that’s where we spend a lot of time. So, yeah, I wouldn’t say that. I’ll be writing a book on moats anytime soon. I’ll leave that for Pat Dorsey. But I think he’s as good as anybody about thinking about that stuff. I think we’re really good at that. But that’s just one small part of our overall architecture.

Tobias: What about in terms of negatives, things that many folks believe are moats, but you guys have a different view?

Tobias: Where do you feel you can be tricked?

Brian: I think we have been tricked before on the cultural moat. I think that there’s some legitimacy to that and we’ve seen it. Certainly, I’ve seen it. But a phenomenal cultural advantage with a good business system, and good people running it, running up against an average or highly competitive business, that’s a tough thing to overcome. I’d say if we’re ranking what we prefer in moat management growth, we probably would prefer– if the sliders go from 0 to 10 on each of those, we’d probably prefer a 10/10 on the moat rather than the management just because it’s hard for an average management to overcome– great management to overcome no moat, then vice versa.

Then again, it happens all the time. Obviously, Berkshire Hathaway is a great example, commodity and insurance and textile business with great management has turned into a behemoth. We had a lot of success owning a company called Middleby Corporation, which is a commercial cooking equipment company. But it was run by, I would say, a 10/10 manager for better part of two decades. He’s probably the best manager that we’d ever come across. If we ever had to write the next outsiders’ book with– I’m blanking on the name even though I know him. But anyway, if we had to write chapter 1 of the next outsiders’ book, we probably put Selim Bassoul of Middleby as chapter 1. He was just phenomenal. He had the full talent stack.

One Comment on “Wide Moat Companies And How To Find Them”