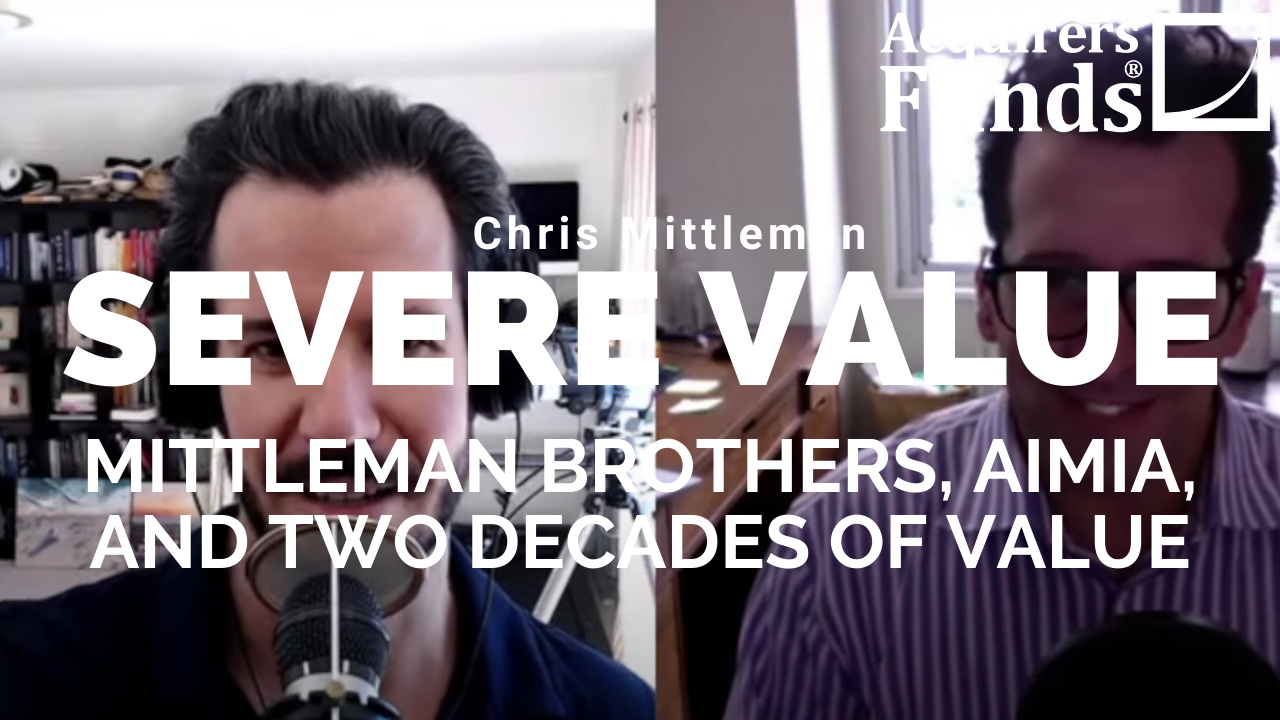 During his recent interview with Tobias, Chris Mittleman, Founder of Mittleman Brothers discussed The Time Berkshire’s Share Price Dropped 50%. Here’s an excerpt from the interview:

Tobias: Just one of the things that I noticed in your note, the most recent one. You talked about Buffett when he got control of Berkshire, I didn’t realize this. From ’69 to ’75, Berkshire’s share price almost halved over that period of time. Do you want to tell that story?

Chris: Sure. Well, that was something– I don’t know where I first read about that, but I was surprised too. I delved into it more deeply over the years just because it’s a period in Buffett’s coming up that doesn’t get a lot of attention because it’s not super amazing. It’s like, “Oh, well, his stock went from 42 to 38 after hitting as high as 93.”

Tobias: Kind of predates the letters too.

Chris: Yeah, the letters were actually going on, but they just weren’t publicized. So, there were letters and you can get them but they’re not part of the more highly publicized chunk of letters. And it was more complicated, messy time for Berkshire. If you read, there’s a book called The Snowball, by Alice Schroeder, I think her name is. I had known of her since my days at Paine Webber, UBS because she was an insurance analyst. She, I think, was one of the first ones to pick up coverage at Berkshire. It’s amazing that Berkshire didn’t have a sell-side research report on it until I think she picked it up in the late 90s after all the success that they had, which just shows you like the way Wall Street works.

I looked into this, and I was amazed to see that– part of the reason that he was maybe having trouble getting a good valuation was that he was involved in some messy situations. Washington Post was going through a period where they were under US government pressure. I think Nixon was trying to cancel their broadcast license on TV stations down in Florida. He himself was under investigation by the SEC for insider trading– I think it was not insider– I think it was technically market manipulation or securities fraud because they had been bidding in the open market for a certain security at an unusually high price in a way to try to help people who wanted to sell it.

There was nothing nefarious about what he was doing and it was actually done out of an abundance of goodness on his part but because it technically tripped into what the SEC deemed to be securities, fraud or manipulation, they had a very stressful period where they had to negotiate some kind of a settlement or center or something like that. It worked out that his reputation was saved. He didn’t have– it didn’t go to the next level. But it was a time that was difficult.

I just thought it was interesting, because think about yourself as an investor in that if you were there. Six years is a long time to wait. I thought what was really telling you about it was that one of his best friends, that guy, Harry Brent, who had been, I think, roommates within New York City. A friend of 15 years, you know, he tells Warren Buffett, “Look, I can’t handle this thing going under 40. Tell me it won’t go under 40.” And Buffett is telling him, “I can’t tell you that.” So, he sells it just above 40, half of his Berkshire stock just because he couldn’t take the psychological pain of having it been cut in half and going any further.

You think about the magnitude of these decisions, what that decision meant, and it’s just incredible. Who would have known that from this messy conglomerate that’s such an amazing thing would develop? But that’s the beauty of this business, is that you could be wrong for a huge period of time and then be so right that it makes it all worthwhile in the end. I think that’s a very encouraging message for value investors, is that not to be– listen, you don’t want to bury your head in the sand and just be– guys who held on to Sears, Kodak, JC Penney too long obviously suffered. There are times when it does become obvious that you need to move on. But it’s not always so obvious. So, I do think that period in history is something that people should study and look into more because it’s really interesting to think of how hard it must have been for some people to stick with that investment, even though that was exactly the right thing to do.

Tobias: I think it’s Harry Brent who was the gentleman who did the scuttlebutt for Buffett in his American Express position, so he features very heavily in the Buffett legend.

Chris: Yep, that was the name.

Tobias: Even Harry Brent couldn’t hold on. It just shows how hard it is.