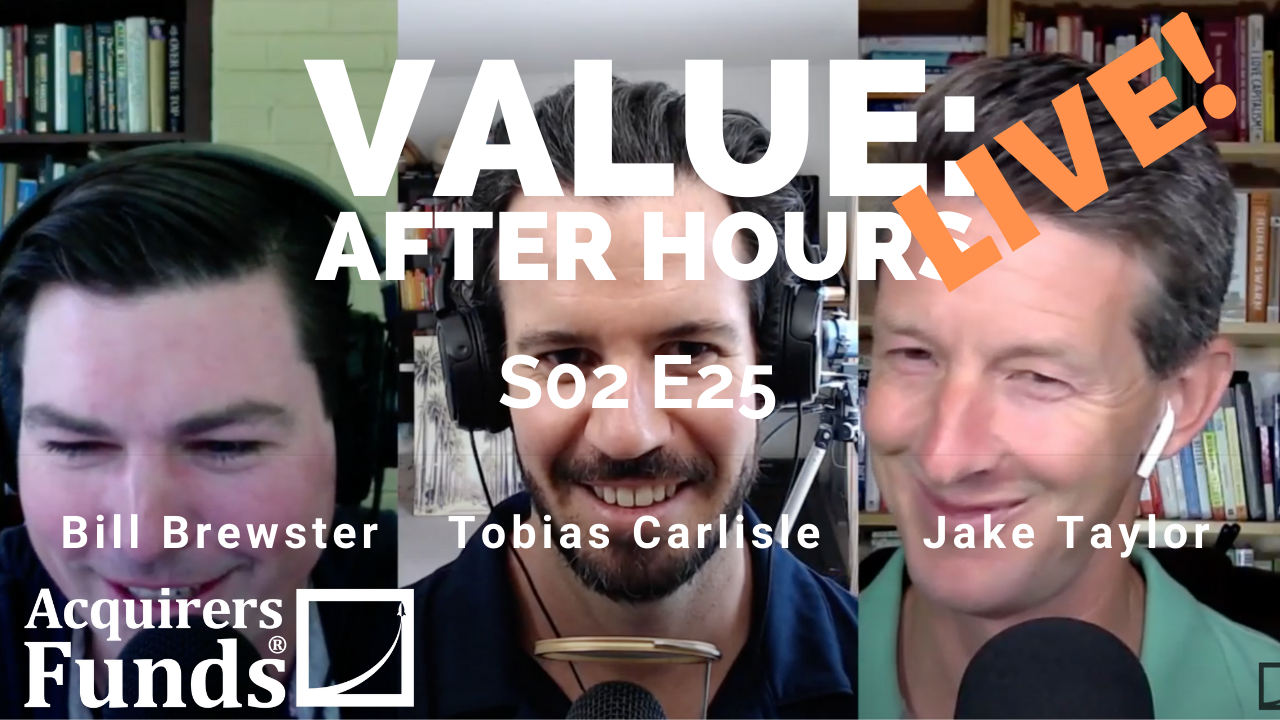 During their recent episode of the VALUE: After Hours Podcast, Taylor, Brewster, and Carlisle discussed why Investors Should Be Very Wary Of Financial Market Commentary. Here’s an excerpt from the episode:

Bill: Last week, I had talked about TransDigm and easy questions at the bottom, or at lower prices I should say. And I wanna reiterate that I think that the decisions are much easier when prices are lower. I think that that’s objectively true. What I don’t wanna minimize is the risk that that entity carries. And a good way to get your head around it if you heard me talk last week and you’re interested, is if you read the Inspector General’s report for the Department of Justice, where they said that TransDigm was earning excessive margins. That is a very good report.

Tobias: What is excessive?

Tobias: What do they mean by excessive, for the customers or excessive for a business of that type? Or what’s that? Or that’s just at peak earnings multiple and so it’s gonna come back from there?

Tobias: Yeah, that’s what I was trying to understand. Is that what they’re talking about, okay. They’re saying that’s excessive.

Bill: Yeah. And what they’re basically saying is you have to provide the DOJ with the cost of goods that you’re making. But in TransDigm’s case, their argument is, we don’t have the cost. Some of these parts are like very old run, or they’re priced too low, so it’s below the threshold that we have to provide your costs, so there are other ways that we’re going to price our products off of it. One of which is older sales and the other is sales in the commercial market.

And some of the prices are eye-popping, I mean 4,000% gross margins or whatever on a part. What TransDigm’s retort to that is, is it’s a one-off part. We’ve either inventoried it forever, or we have to spin up everything and make it and yes, it is correct that that particular part may look egregious, but in the whole scheme of things, it’s not. Now, whether or not you wanna agree with that argument or not, or I’m articulating it correctly or not, I would encourage people to go to the source information and find out for yourself. What Nick Howley, the CEO, said is like, “We are not a traditional defense contractor. We fund all of our R&D internally. We sell to the commercial market and the DOJ happens to pay the same prices that the commercial market does.”

Look, I think there’s a lot of reasons to dislike that. There’s some reasons to dislike a levered philosophy that somewhat relies on that. The end market is cyclical and some people pitch it as secular. And I just want to be very careful, given some of the events in my current life, to tell people to seek the other side of the trade and not rely on what I may be saying or somebody else.

And just to wrap up, when I was doing AB InBev research, there’s great, great information in the antitrust cases in the US and in the EU. And Buffett has often talked about, “I don’t rely on nonpublic information.” And I think that government reports on companies are like a very underutilized or underdiscussed resource that’s out there that the US taxpayer is paying for and it’s sometimes really good information.

Tobias: Where do you find them? It depends.

Bill: Well, that one–

Bill: Yeah. I can think of three off the top of my head. The TransDigm one I was just talking about, just Google Inspector General report on TransDigm, that’ll bring that one up. AB InBev, you can just google like AB InBev SABMiller acquisition antitrust, and then EU and US. And then the other one is– what’s the third?

Jake: So, there’s no repository.

Tobias: Yeah. But my question is, you are actively looking for this stuff open-endedly, how are you tracking it down or finding it?

Bill: Well, it’s mostly by finding the news. So, there was a big 5G report that came out that Sorkin had cited and I just went to the– the source documents are so much better than people’s interpretation of the source documents. Even here, I’m talking about my memory of this thing, and I’m tired and I’ve had a stressful weekend. And so if you listen to what I’m saying, it’s just not the right story.

Tobias: Do you need to be a lawyer to read them?

Bill: I don’t think so. It takes work, it’s like reading 10Ks. You don’t open a 10K and get it the first time but then eventually it clicks. But investing takes work, right? Unless you’re buying the airlines, which is apparently easy.

Tobias: Or the cruise lines, that’s easy too.

Bill: That’s right. I gotta say, I know on Twitter, I took a shot at them or not really. I just think you gotta be really, really careful following Davey Day Trader, but man, his media, he is good at what he does. I gotta give him that.

Tobias: It’s a great follow. It’s one of the best accounts out there if you like this stuff. But yeah, we all talk about a little bit when– I’m not trying to bomb on him at all, I love what he does, I think he’s great.

Tobias: Just to go back to CDG, isn’t the point of a business to sell the stuff that you sell? So, basically the profit– you’re trying to maximize the profit in the long run. So, you don’t wanna gouge your customers too badly, so they go and get another supplier. But you wanna charge them– I don’t remember microeconomics, but I remember monopolies don’t charge the absolute. They don’t charge an infinite amount, they charge according to some long-run demand or supply curve. I can’t remember frankly, but the theory doesn’t really matter that much anyway, but just the point is, aren’t they trying to charge as much as they possibly can for these things? What’s wrong with that?

Bill: Well, so it’s a razor-razor blade model. So their argument is we invest a lot in R&D, and we start to make money as the products season. And the issue that the DOJ has with them is even the competitive bids, they’re being sourced from TransDigm. So, it’s TransDigm selling to somebody else and then that person selling to the DOJ. I think something like 38 of the 41 parts were actually monopoly parts. And Howley, the CEO, he said, if you don’t—

Jake: [crosstalk] Do you mean DOD?

Tobias: Don’t gouge the DOD either.

Bill: Yeah. Thank you, Jake. My head is in a different place. But, he said, “If you don’t like it, go buy it from somebody else or have somebody else reverse-engineer it.” And I think the point that he’s making is like, “Yes, I agree with you that if you were to look at this one transaction in isolation, it may appear egregious. If you take into account all the investment and warehousing the inventories over time, you’d find it’s actually a pretty efficient method.”

Tobias: Has the DOD looked at the margins on its Microsoft Office? That’s so far as a service, there’s pretty fat margins in that too. What about their cable subscription? Pretty good margins in that business.

Bill: Yeah, well, this is where I think that–

Tobias: But if you gotta make this stuff each time, you should be able to charge something for it, right? You gotta have a factory. You gotta know how to do it. You gotta do it.

Bill: Yeah. And if it is a one-off part, you have to stop your assembly line, you have to start one up, you got to make it. I mean retooling is not cheap. As a taxpayer, I’m not saying that I loved seeing some of the numbers but I also don’t think it’s as egregious as it may read. There’s nuance in life.

Tobias: When I was a kid, I remember people were upset because there were like $4,000 hammers, $4,000 toilet seats, and things like that.

Bill: That’s right. Well, if they didn’t have to go–

Bill: Am I still here?

Tobias: You are. You’re fine. [crosstalk]

Jake: I heard you talking shit about the government.

Jake: So, I have a little bit of follow-up with that, actually dovetails into what I was gonna talk about. But Jim Chanos has this really great metaphor of information as an onion. And at the very core of the onion, where there’s the most signal-to-noise ratio are the SEC filings typically, probably also would put government reports like that into that center core of the onion. The next layer out of the onion is the corporation’s interpretation of all of the information that they’re giving you. So those are like their slide decks or conference calls, annual reports.

The next layer out also, by the way, diluting from signal and noise, would be like sell-side research, industrial publications, things like that. And then finally, on the outer layer, you have the rumor mill, Twitter, Seeking Alpha, wallstreetbets, that area. And so, Chanos has said before, and I thought this was interesting was, he’ll read something in an SEC filing and then read almost a 180-degree difference of someone’s interpretation of what he just read on Twitter or whatever. And he just like can’t square those two things. And I think he’s right. If you’re depending solely on the rumor mill for your information, then your chances of catching reality head-on, I think, are pretty diminished. And the worst of it being, if someone’s entire thesis is just stocks only go up, and that’s like what they’re telling you.

Tobias: It’s been true since March 23, which is about how long everybody’s been in the market.

Tobias: Well, that’s true. Are we at all-time highs?

Tobias: I think the Qs were.

Tobias: The Qs are everything. What do you mean outside the Qs?

Jake: What are you talking about? [chuckles]

Bill: I don’t know. Everything. Yeah, all my shit. Please.

Tobias: Do you wanna do yours, JT, continue with your thoughts there?

Jake: All right. So, I’m switching to–

Jake: –astrophysics mode. All right. This will hopefully be a little bit shorter since we’ve had some feedback that my veggies sometimes take a little too long to cook.

Jake: I don’t know if you guys know this, but in the universe, so far what we’ve observed is that approximately 18% of the mass–

Bill: This is cracking me up, real quick. I’m having problems concentrating. All right, let me just regather my thoughts.