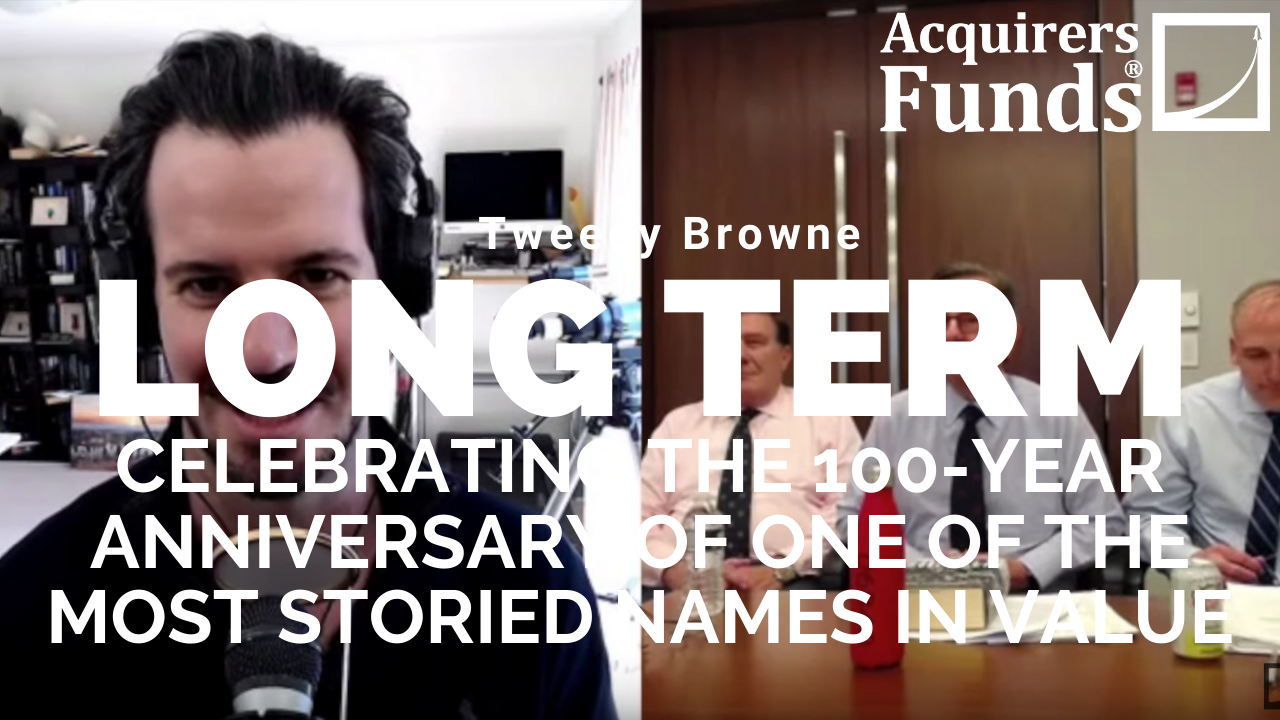 During his recent interview with Tobias, the team from Tweedy Browne discussed Comparing Companies Using The ‘Owner Earnings Yield’. Here’s an excerpt from the interview:

Jay Hill:
Yeah. And I guess the next part of the process is how do we identify new ideas, right? And I would say probably 80 to 90% of the new ideas that I’ve come up with over the years have come from quantitative screens. There’s no one quantitative Tweedy screen that we us. Each analyst is free to use their own methodologies. But in general, I would say that our screens tend to rhyme. So we’re generally looking for companies with a market cap in excess of $200 million USD. So, we’ll go down into small-cap territory. We’re looking for companies that have an enterprise value to EBIT of less than 10, generally speaking. There’s a new metric that we’re using, that we refer to as owner earnings yield, and that probably deserves a little bit of an explanation.

Jay Hill:
Tax rates have been coming down around the world, right? And it’s our view that if you had two companies, each trading, let’s say, at an enterprise value to EBIT of 10, but one company had a 40% tax rate, and the other company had a 20% tax rate, we believe that the company with a lower tax rate is worth more. And so one of the metrics that we’ve come up to adjust for that and to adjust for the fact that tax rates have been coming down around the world, is to look at what we call the owner earnings yield. And to define that explicitly, the owner earnings yield is, the numerator is net operating profit after tax. Another way to say that would be EBIT times one minus the tax rate.

Tobias Carlisle:
Got it.

Jay Hill:
That’s the numerator and the denominator is enterprise value. The way you would traditionally calculate it. And generally speaking for new ideas, we’re looking for companies that have an owner earnings yield of 8% or higher. And then we also have a metric and I know you’re a big fan of this as well. I read about it in your book that we’re pretty risk averse when it comes to leverage. And so generally speaking, our screens have maximum net debt-to-EBITDA of two and a half times or less. That number is not set in stone, we realize some businesses have greater visibility than others. And so there are instances where we will buy a business that has higher leverage than that.

Tom:
But lower is better.

Jay Hill:
But lower is better. Absolutely. And then I would say look, we also look at our competitors of businesses that we’ve studied. That’s been a source of new ideas over time. We look at 52 week low lists, insider buying, we’re big believers in the efficacy of combining cheap quantitative criteria with insider buying. And so that’s another, I guess, metric or tool that we use to uncover new ideas. Once we’ve identified a cheap stock, then really the real work begins and that’s when the analyst is going to go and read the most recent 10K, 10Q, read relevant sell side research, reports, read company presentations or analysts days, develop a financial model going back oftentimes 10 or 15 years in time to study the long term underlying trends in the business. I think we spend a lot of time studying the margin history of a business over time and trying to understand why margins have either increased or decreased.

Jay Hill:
What we want to really avoid, right, is valuing a company off of peak margins, that you’re putting a multiple on a company that’s earning peak earnings and overvaluing the business or the opposite, putting a multiple on trough earnings, right? So in many instances, we’re trying to estimate what’s normalized earnings over a cycle. We’re also big believers in free cash flow quality or free cash flow conversion, we defined that as does the company do a good job of converting that net income number on the income statement that has all types of accruals? Does the company actually convert that number at a high rate into free cash flow? And so we’ll look at let’s say a five year period or a 10 year period, free cash flow can be highly volatile, right? Even more volatile than earnings, but over an extended period of time does the company convert its net income into a high level of free cash flow and if it does, that gives us comfort that the earnings quality is high. And then really the final job of the analyst is to obviously identify the attractive attributes or characteristics of a business, but also identify the risks.