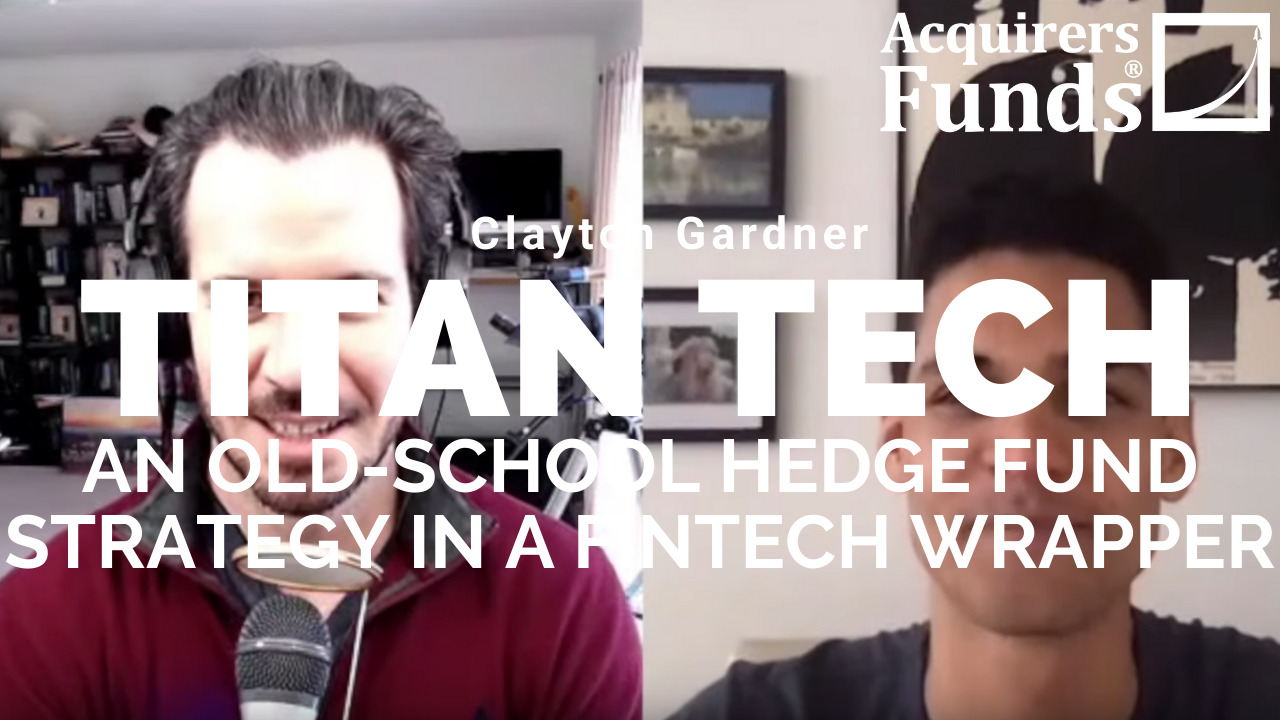 During his recent conversation with Tobias, Clayton Gardner, co-founder of Titan, discussed Buying Good Companies That Will Not Have Free Cash Flow Impairment For The Next 3-5 Years. Here’s an excerpt from the interview:

Tobias Carlisle:
On coronavirus, I think it’s been quite interesting watching FinTwit, because I think a lot of guys on FinTwit were very early to it too because I think that they, and VCs are probably the same, a lot of guys understand that exponential growth curve really well, which is not intuitive unless you model it out and think about, which is what you’re doing when you’re building a model for a business and trying to value it, you’re thinking about that exponential growth curve.

Tobias Carlisle:
And you could look at other countries and see where they were and look at the US relative to those. So I think it’s been interesting, it’s one of those things where there’s a lot of shade thrown at guys for being amateur virologists, and things like that, but I think that some of those guys need some credit, They did, Ben Hunt, I don’t know if you follow these guys on Twitter, but they were very, very early to this stuff and calling it out. That’s epsilon. Epsilon theory.

Clayton Gardner:
For sure. Yeah, yeah, Ben Hunt. No, it’s a great point. And I’ll be the first person to say I’m not an epidemiologist. I actually come from a family of physicians and my dad, for example, is the first person to say, “I have no frigging clue what’s going.”, but your point on exponential growth is actually a really good one. And it’s also a second and third order thinking. Right?

Clayton Gardner:
I think a lot of investors are better than the average American or average human on thinking what second and third order impacts are. And are they priced in, are they over or undervalued? And so, one of the things that came to mind with coronavirus is I have no idea on… Or not, and all these things. I’ll try to go to the most reputable primary source to understand what that means, but I’m not going to have any predictions on whether that’s priced in or not, or how that may or may not unfold.

Clayton Gardner:
But what is pretty clear is there is certain second and third order impacts that I think investors were appreciating long before the public has, namely this hospital bed thing.

Clayton Gardner:
Connecting the dots between the exponential growth pandemics and outbreaks and the second or third order economic consequences. I think there’s something like 900,000 or a million hospital beds in the US, and 75% occupancy, call it, for a variety of just general health reasons.

Clayton Gardner:
So if there’s a quarter of a million beds are free, if you just roll out that exponential growth curve, I think there’s something like the doubling of cases, it happens every six days, and I think the reported number is probably a fraction of the actual number, so even if you’re in the low to mid single digit thousands of cases today, it’s early to mid-March, you just roll that through, you’re looking at millions of cases by late April, early May, right?

Clayton Gardner:
And say it’s only a 10% bed rate, right? 10% is so infectious they have to get hospitalized, maybe even ICU, you’re looking at full hospital bed capacity utilization by late April or early May.

Clayton Gardner:
Now obviously, there’s a bunch of underlying assumptions on the exponential curve continuing, there not being any containment ability to mitigate that curve, and then barring any massive systemic upgrade or deployment of new beds on the supply side, whether that means existing patients are getting pushed out, or how that affects the system that’s naturally constrained is a second order consequence, and I’m sure there’s third and fourth order consequences as well, but that’s one that I heard.

Clayton Gardner:
So yeah, I think the broader point is it’s honestly more game theory and math, and basic fundamentals involved, as opposed to having to predict this specific virus. So that’s how we approach it, Toby, is we’re looking, like Buffett said, we’re looking for two foot hurdles to step over. We’re not trying to, what’s the latest speculative healthcare stock that I think could massively re-rate because they produce an N-95 mask, or something like that.

Clayton Gardner:
We’re looking for companies that, with a pretty high degree of certainty, if you look out three to five years, we don’t see material free cashflow impairment. Certainly, a lot of these stocks were expensive, now they’re just 20% less expensive and so that’s the reason we’re not telling clients, “Go hand over fist and all in, back up the truck.” There could be this second wave phenomenon.

Clayton Gardner:
But if I look out three to five years, those are the two foot hurdles. It’s this diverse strategies full of compounders, a couple name, Booking, Disney, that are travel-exposed, Apple. Travel or China-exposed definitely have gotten hit hardest, are probably going to have the worst years just from an earnings decline perspective, but looking out three to five years, I just don’t see, unless this is completely different than history, it’s hard to see how a pandemic just materially affects these types of companies.

Clayton Gardner:
I think certain sectors like oil, we just had this oil price war a few days ago between the Saudis and Russia, on the industrial side, how that affects employment and the ripple through the economy. Not saying that there won’t be a significant hit to GDP growth but just longterm earnings growth, which is how we think, we’re modeling longterm EPS growth, and then multiples on that, it’s hard to see how these stocks are lower five years from now.

Tobias Carlisle:
Yeah. I agree with all of that completely. I think that’s well-stated.