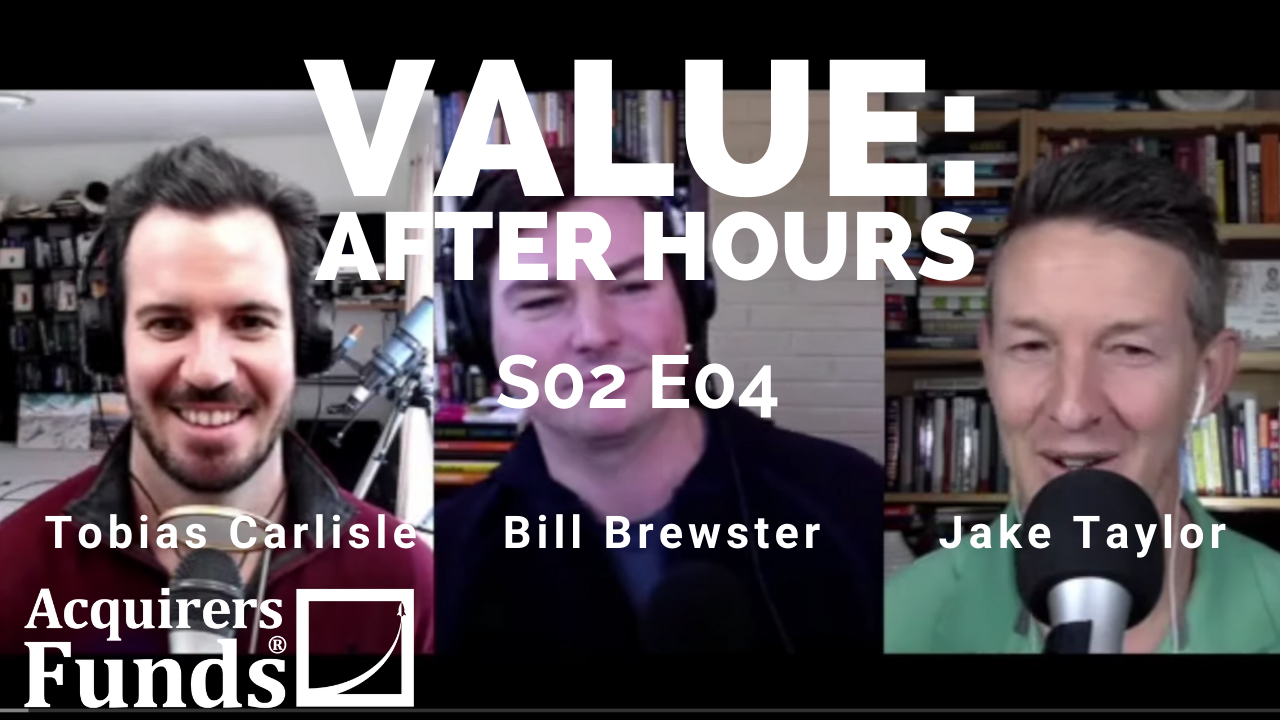 In this week’s episode of the VALUE: After Hours Podcast, Taylor, Brewster, and Carlisle discuss how to implement an Anti-FOMO sizing strategy to get started in a position. Here’s an excerpt from the episode:

Bill Brewster: So I was talking with somebody that listens to the podcast and he was commenting on how weak my answers sounded to the, why don’t I run outside capital question. And I felt like I probably owe it to the listening base. Hello. I think we’re up to 10 so hello to all 10 of you. But to be honest about it, right? And I thought about my answer and I thought it was actually a pretty weak answer. And I guess that part of the issue is I’m still not a hundred percent sure of the strategy that I want to take to the world. Like I’m really struggling with sort of where I came from in the beginning, which was the Buffet and Graham thing and the way that they look at the world to these, why not buy better businesses at some reasonable prices. And the current, what?

Bill Brewster: Yeah. Well look, I mean this is an art, right? I don’t know how you define that, but it’s like any other asset I guess. And then the behavioral problem that I have made more likely doing counter with the strategy that I’m running, looking for mispricings is, I actually think that who I am gets a little bit of FOMO if I’m doing work on a company that I think could be a good value. I get worried that the market’s going to realize it so quickly and I think it almost-

Tobias Carlisle: By a half point.

Bill Brewster: Yeah. Well I think I need to work on sort of thinking that way. Like who cares if it goes up a half point, right?

Tobias Carlisle: By a half point. So what I’m saying is like, just like sit down and work out a structure. So having done this much work, I’m allowed to buy this much, this much work I’m allowed to buy this much. And so on. So like when you first see it seal the ratio, it looks really good, read a few 10K’s and Q’s and whatever that allows you to buy whatever, half one. And then as you keep on going in, you’re like, actually there’s more to this than I realize I’m allowed to take this position up until you get whatever your inception limit is, three, four, five, 10 whatever.

Bill Brewster: All on it.

Bill Brewster: No, I think that’s a really good answer. So working through some of that stuff before I have all that ironed down. I mean you’ve got to have that. I think you have to have that system before you take something to market. I don’t think those are the type of questions that you take something to market unproven. Right? And I think that what you said makes a lot of sense. It’s actually what I did with that company that I just wrote up. Ali’s was, I did some work on it and it has a lot of what I really like in a story. So you have the founder that died, you have-

Tobias Carlisle: That’s what I always look forward to.

Bill Brewster: To be fair I worded that improperly. They missed on a quarter, sold off hard. The founder died. I think there’s a lot of reasons that we cans would be selling the stock now. As I sort of had it written out on a piece of paper. Right? And then as I started to pen the longer article and I started to actually write what do you have to believe for this to make sense and what’s the actual upside downside. I got to the point where I said somewhere in the article I said something like, you need to have a 43% chance of having the current management be able to run the business. That’s like sort of silly, but that’s how the numbers that I was working with worked. And I asked myself like what makes me the person that’s able to make that bet? And I don’t have a good answer to that other than time. So I don’t know, it’s just one of those things that-

Tobias Carlisle: It’s funny you could go through an analysis, any analysis and you could holding all the other inputs the same, and you could figure out what probability each of the inputs that you have has to be to get. I can see how I can understand how you’ve got to that point. Like I can see how, what does this whole thing turn on if I keep all of these other ones static for this one to succeed, this thing working. I think if you did that, like that might almost paralyze you.

Bill Brewster: I know it’s kind of terrifying to do, but I do think that like for that particular entity, in my mind, the bet is, was this thing dependent on one guy? Can the current management execute the plan? And then I guess the second question is, can they get to their store count? But thus far they’ve been able to execute their entire plan, so I’m not sure that the store count question really matters yet. I don’t know that that matters for another six years or so if they have proven it now.

Bill Brewster: Now there’s a short thesis going around that might allege that they’re doing fraudulent things to the inventory. That’s a whole nother basket of worms. Right? But for these purposes, assume it’s not a fraud. Maybe that’s-

Tobias Carlisle: Since the new management came in?

Bill Brewster: Well, yeah, they’ve only held one call and they haven’t executed at all.

Tobias Carlisle: Okay. I mean this is a perfect opportunity for them to clear that out. Blame it on the big guy.

Tobias Carlisle: That’s what I’d do.

Bill Brewster: He was a charismatic founder. Everybody loved him. So we’ll see. I don’t know. It’s an interesting setup, but it was one of those that I felt like I took a small position because I felt like I had done the work that I needed to do, but then actually sitting down and writing I was like, I don’t know, maybe this is an error commission here and one that’s an error that is-

Tobias Carlisle: There are no errors of commission anymore.

Tobias Carlisle: The only error is not buying. Yeah.

Jake Taylor: Let me ask you this Bill. If you, let’s say that 100% or a hundred is your perfect, like you know that you have the best process that you are capable of doing in the investing world of analyzing and controlling for biases, all those kinds of things.

Jake Taylor: What number do you think you need? What threshold do you need to get over to feel comfortable managing other people’s money, right? Because you’re theoretically always going to be learning and getting better. Right? And hopefully your process is getting better as well. But what’s kind of that minimum number in your head that you would need to get over to take outside money?

Bill Brewster: I don’t know that I have a good answer for that. I would need to have an answer as to what kind of companies am I going to target, that I think is something that people probably want to know, and two, I would need to make sure that I had a process where I wasn’t making early errors of commission, because I think those are probably my biggest personal risk. So if I could have a system in place that sort of, maybe it’s a guy stereotype system where I say the day that I decided to buy, I’m not buying for a week. Right? Because who cares?

Bill Brewster: That’s right. And just sort of a blockade, that may be sufficient, but I-

Jake Taylor: You know what you need to carry yourself of that little FOMO bug is just to watch prices go down every day in a grinding bear market where you buy and you’re like, oh my God, I can’t believe I bought already. And it just keeps grinding on you. That might cure you. Because that hurts.

Bill Brewster: Yeah. Well, I do think that this is late cycle FOMO and it goes back to when I said earlier to you guys, how many people have really managed through pain? Extended pain is going to be a much different feeling for a lot of managers out there.

Tobias Carlisle: Being a deep value investor for a decade. I can run a thesis on it at this point.

Bill Brewster: Well you have you, oh, just the pain. I was going to say you’ve written a fair amount of books on deep value.

Tobias Carlisle: I buy something undervalued. It goes down further. It’s still undervalued and I’ve got to sell it out because there’s other more cheaper stuff around.

Bill Brewster: Yeah. Well for a while everything I bought would go down a fair amount-

Tobias Carlisle: In a rising market?

Bill Brewster: Yeah. Well that’s what happened to me on Ryanair. I mean I bought Ryanair and that thing was just nobody wanted it. And then I just kept buying more, which worked out. But that one, I think I was right for the right reasons.