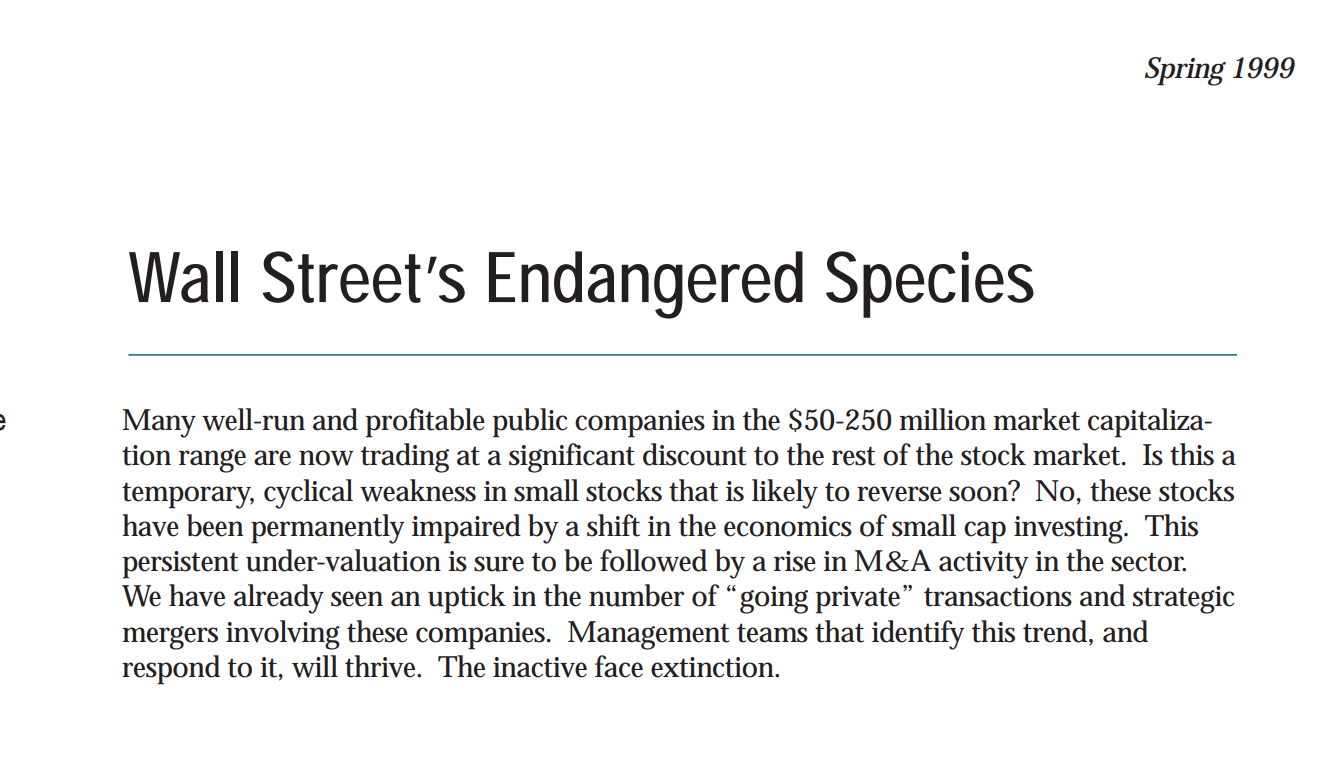 Twenty years ago in the spring of 1999, Piper Jaffray’s Daniel J. Donoghue, Michael R. Murphy and Mark Buckley*, produced a research report called Wall Street’s Endangered Species (incredibly, the link is still live 20 years later) that was hugely influential on my investment process. The thesis of the paper was that there were a large number of undervalued companies with strong fundamentals and solid growth prospects in the small cap sector (defined as stocks with a market capitalization between $50M and $250M) lacking a competitive auction for their shares. Donoghue, Murphy and Buckley argued that the phenomenon was secular, and only mergers or buyouts would “close their value gap:”

This led to the emergence of activist investors in the small cap sector over the first decade of the Oughts. A similar phenomenon exists now in the SMID cap space.

The document was drafted from the perspective of a M&A team selling corporate advisory services:

Many well-run and profitable public companies in the $50-250 million market capitalization range are now trading at a significant discount to the rest of the stock market. Is this a temporary, cyclical weakness in small stocks that is likely to reverse soon? No, these stocks have been permanently impaired by a shift in the economics of small cap investing. This persistent under-valuation is sure to be followed by a rise in M&A activity in the sector. We have already seen an uptick in the number of “going private” transactions and strategic mergers involving these companies. Management teams that identify this trend, and respond to it, will thrive. The inactive face extinction.

Donoghue, Murphy and Buckley’s thesis was based on the then relative underperformance of the Russell 2000 to the S&P 500:

They argued that the foregoing graph was a little misleading because the entirety of the Russell 2000 universe wasn’t underperforming, just the smallest members of the index:

However, a closer look at the smallest companies within the Russell 2000 reveals a secular decline in valuations that is not likely to be reversed. The table in Exhibit II divides the Russell 2000 into deciles according to market capitalization. Immediately noticeable is the disparity between the top decile, with a median market capitalization of $1.5 billion, and the tenth decile at less than $125 million. Even more striking is the comparison of compounded annual returns for the past ten years. The data clearly demonstrates that it is not the commonly tracked small cap universe as a whole that is plagued by poor stock performance but rather the smallest of the small: companies less than about $250 million in value.

Stocks trading at a discount to private company valuations

The underperformance led to these sub-$250M market cap companies trading at a discount to private company valuations:

Obscurity in the stock market translates into sub-par valuations. As shown in Exhibit IV, the smaller of the Russell 2000 companies significantly lag the S&P 500 in earnings and EBIT multiples. It is startling to find that with an average EBIT multiple of 9.0 times, many of these firms are valued below the acquisition prices of private companies.

Reviving shareholder value requires a fundamental change in ownership structure. Equity must be transferred out of the hands of an unadoring public, and into those of either: 1) management backed by private capital, or 2) larger companies that can capture strategic benefits. Either remedy breathes new life into these companies by providing cheaper sources of capital, and by shifting the focus away from quarterly EPS to long-term growth.

The market had not entirely missed the value proposition. M&A in the small cap sector was increasing in terms of price and number of transactions:

Donoghue, Murphy and Buckley argued that the value proposition presented by these good-but-orphaned companies, which they called “Darwin’s darlings,” presented an attractive opportunity, described as follows:

Despite the acceleration of orphaned public company acquisitions in 1997 and 1998, there remains a very large universe of attractive public small cap firms. We sifted through the public markets, focusing on the $50-250 million market capitalization range, to construct a list of the most appealing companies. We narrowed our search by eliminating certain non-industrial sectors and ended up with over 1500 companies.

We analyzed their valuations relative to the S&P 500. The disparity is so wide that the typical S&P 500 company could pay a 50% premium to acquire the average small cap in this group without incurring earnings dilution. Those dynamics appear to be exactly what is driving small cap takeover values. The median EBIT multiple paid for small caps in 1998 was roughly equal to where the typical S&P 500 trades.

We honed in on those companies with multiples that are positive, but even more deeply discounted at less than 50% of the S&P 500. Finally, we selected only those with compounded annual EBIT growth of over 10% for the past five years. As shown in Exhibit VII, these 110 companies,“Darwin’s Darlings,” have a median valuation of only 5.8 times EBIT despite a compounded annual growth rate in EBIT of over 30% for the past five years.

The emergence of activists

Donoghue, Murphy and Buckley identified the holders of many of these so-called “Darwin’s darlings” as “small cap investment funds focused on likely takeover targets:”

As detailed in the description of our “Darwin’s Darlings” in Exhibit VIII, management ownership varies widely among these companies. For recent IPOs of family-held businesses, management stakes are generally high. For those that were corporate spin-offs, management ownership tends to be low. We frequently find large blocks of these stocks held by small cap investment funds focused on likely take-over targets, leading to a surprisingly high percentage of total insider ownership (management plus holders of more than 5%).

Regardless of ownership structure, these companies typically have the customary defensive mechanisms in place. They are also protected by the fact that they are so thinly traded. In most cases it takes more than six months to accumulate a 5% position in the stock without moving the market. Hence, we expect virtually all acquisitions in this sector to be friendly. There is no question that some very attractive targets cannot be acquired on a friendly basis. However, coercing these companies into a change of control means being prepared to launch a full proxy fight and tender offer.

In When Wall Street Scorns Good Companies, a Fortune magazine article from October 2000, writer Geoffrey Colvin asked of Darwin’s darlings, “So why are all these firms still independent?”

The answer may lie in another fact about them: On average, insiders own half their shares. When the proportion is that high, the insiders are most likely founders; they have enough stock to fend off any hostile approach, and they haven’t sold because they aren’t ready to give up control. Not many outside investors want to go along for that ride. Thus, low prices.

But there’s still a logical problem. Since the companies are so cheap, why don’t managers buy the shares they don’t already own– take the company private at today’s crummy multiple, then sell the whole shebang at an almost guaranteed higher price? Going private has in fact become more popular than ever, but what seems most striking is how rare it remains. Of Piper Jaffray’s 1999 Darwin’s Darlings– 110 companies–only three went private in the following 12 months. That makes perfect sense if you figure that many of the outfits are run by owner-managers whose top priority is keeping control. Announce a going-private transaction and you put the company in play, and even a chummy board may feel obliged to honor its fiduciary duty if a higher bid comes along.

Thus we reach the somewhat ugly truth about Wall Street’s orphaned stars: Many of them (not all) like things the way they are–that is, they like staying in control. The outsider owners are typically a diffuse bunch in no position to put heat on the controlling insiders. The stock price may be lousy, but when the owner-managers decide to sell–that is, to get out of the way–it will almost certainly rise handsomely, as it did for the 19 of last year’s Darwin’s Darlings that have since sold.

So shed no tears for these scorned companies, and don’t buy their shares without a deep understanding of what the majority owners have in mind. In theory the spreading corporate governance movement ought to protect you; in practice the shareholder activists have bigger fish to fry. Such circumstances may keep share prices down, but that’s the owner-managers’ problem. At least, in this case, the market isn’t so mysterious after all.

The report predicted for the emergence of the activists in the small cap sector. Observing that stock prices rose dramatically when owner-managers of “Wall Street’s orphaned stars” decided to sell, and outside investors were “typically a diffuse bunch in no position to put heat on the controlling insiders,” activist investors saw the obvious value proposition and path to a catalyst and entered the fray. This led to a golden decade for activist investing in the small cap sector, one that I think is unlikely to be repeated in the next decade. Regardless, it’s an interesting strategy, and an obvious extension for an investor focussed on small capitalization stocks and activist targets.

*Donoghue, Murphy and Buckley in 2002 founded Discovery Group (unfortunately, the link is dead), a fund manager and M&A advisory that took significant ownership stakes (up to 20%) in companies trading at a discount to “fundamental economic value.” If anyone knows where Donoghue, Murphy or Buckley went, I’d be happy to chat to them.

This website, and my firm Acquirers Funds®, employs a similar deep-value strategy in the SMID cap space. If you’d like to learn more, contact me at tobias@acquirersfunds.com.